“Who is the biggest loser of all beings in the world?”

Who is the biggest loser of all beings in the world?
He who lives falsely and in contradiction to karmic law.

“Who is the biggest loser of all beings in the world?” Not the people who worldly people think are losers. Okay? But people who live falsely and in contradiction to the law of cause and effect.

You can see why you wind up to be a loser that way. Because the actions we do have an ethical dimension and they leave residual energy on our mindstream that influences what we get born as, what we experience, even when we’re later born human what our mental and physical habits are, and even what place we live in and what happens in that place. So karma—our actions—have a very strong influence on our experiences. And we’re the ones who create our actions.

But just learning about karma isn’t sufficient, because most people here know about karma, but do we carry out our daily actions as if we believed in karma? That’s the question.

Something comes up, we get irritated, then maybe we don’t catch ourselves and the harsh words come out immediately. So, well, okay, we may believe in karma, but the afflictions are too strong at that moment and so the words come out. Sometimes we stop and we go, “Uh, I’m angry, be careful….” And then we say it anyway.

Have you been in that situation? Or you have an opportunity to be generous and the first mental thing is “no.” Or you give something small and then you say to yourself, “Well come on, create some merit!” And the mind still says, “No.”

Has that happened to you? It’s like we believe in karma but we don’t always act as if we believe in karma. Because sometimes we don’t notice, the afflictions are too strong. But sometimes, because down deep do we really believe that that’s a negative action? Do we really believe that’s going to bring suffering to us? Or are we just like “Well, it’s just a small thing, it doesn’t really matter anyway….”

To really live according to conviction in the functioning of the law of cause and effect, really, it’s not so easy. It takes a lot of effort and work on our part. To notice our actions. To overcome all sorts of habits that we have from the past. Habitual behaviors, habitual emotional reactions.

And then even when we do something negative, and part of our mind is saying, “Oh, you shouldn’t be doing it,” and we do it anyway, afterwards do we generate regret? Do we do any kind of purification? Or do we just kind of say, “Oh well, I did it,” and just throw it behind us. Or do we actually sit and say, “Oh boy, I just did that, I didn’t want to, I did it anyway. What was going on? How can I deal with the situation next time it happens? And I regret it.” And then to make amends through doing purification practice.

Really try and be more aware about these kinds of things. Because our ability to work with this law of karma is going to determine how quickly we progress along the path. Because if we ignore karma, and living according to this, but then we study all kinds of high teachings and we expect to have realizations of them, there’s no way that is going to happen because the mind will be too obscured by the negative karmas and it won’t have the enrichment that comes from doing virtuous actions. So it’s really important to be careful and to be astute about that.

[In response to audience] So you have stop, you know, when your mind goes, “Well who cares anyway?” To stop and ask yourself, “Well who is this person I’m thinking might care?” Yes? Do you care? Do you need another person to care? But we care.

It’s not a thing like, “Well, nobody else cares what I do so why should I?” It’s a thing of, “I have my own sense of integrity, I care what I do.”

[In response to audience] It’s very true. You were saying that you remember things in your past and, “Well, people didn’t care then,” or, “Who cared then?” And I remember somebody else telling me they had that same thing, when they get really in a certain mental space, like, “Nobody cares anyway, so why should I care? Nobody else cares.” But you know…. The logic in that: “I shouldn’t care because nobody else cares.” Is that reasonable? That I shouldn’t care about something because nobody else cares? That’s a totally ridiculous reason.

And then, third, to say, “I care.” Doesn’t matter who else cares. Or if anybody else cares. That’s irrelevant. The important thing is I care.

Okay? Because our mind spouts all sorts of stupidagios. So when the mind does that you have to stop and say, “Okay, I’m going to talk to you.” You have a conversation with that stupidagio, you know? And you use your wisdom and your reasoning and you put it in its place.

[In response to audience] So you’re saying that when you say, “Who cares?” that that was like a protective means you used when a kid. But it’s a strange mind, isn’t it? To say “nobody cares.” And “who cares?” It’s an unreasonable mind.

So then you’re saying that now as an adult what you do is you say, “Well, let’s imagine somebody cared and what would that look like?” But for me it’s like, wait a minute, I care.

Because for me, when it’s like “nobody cares,” what am I doing? I’m falling into self-pity. And it’s like, that is a dead end.

Because for me what works better is not, “What would it look like if people cared?” But, “How many people cared at that time in my life but I couldn’t notice it?” That works much better for me. Because as a kid, you know, when you don’t get what you want, it’s like, nobody cares. Actually, I’m sure a lot of people care. I’m sure people care. But we just shut down. You know? Something awful happens and we get blamed and, “Oh, nobody cares about me.” But how do we know that? I’m sure there were other people who cared. Or people who would have cared had they known about the situation at that time. So to just say “nobody cares,” that’s really, I think, quite unreasonable. Even back then. What our itty-bitty kid’s mind said. Which actually wasn’t a very good protection at all. As a kid, to say “nobody cares,” how does that protect you? It doesn’t protect you. So people could be caring a lot, and you’re going [holds arm out, pushing away] “What I want more than anything is for people to care, and when people care hmmmm” [pushing away motion] It’s the same self-sabotaging mechanism that we use so much in our lives. It’s it?

And so just to notice that To notice. Oh, look what I’m doing? I’m pushing away what I want. Say, “knock-knock…. [laughter] I’ve got to be more intelligent….”

[In response to audience] So it’s a mind of anger underlain with sadness and fear. As a kid you don’t know what to do with your sadness and fear. Or your anger. So you say, “Who cares?” But it’s really such a ridiculous method to deal with things, isn’t it?

This is a mind, when I get in that thing of “who cares,” I’m a mind that doesn’t have integrity. And that’s exactly what I was talking about by saying, “I care.” Because “I care” is that mind of integrity.

[In response to audience] Okay, so you were a teacher when the little kids would do that, your friend would go over and sit with them. Because she recognized “Who cares” which is said with anger was a cry for help. And just by going there and sitting with the person, the kid knows somebody cares.

[In response to audience] That’s the whole thing, when we have an afflictive emotion, to stop and say “what’s going on in me that’s causing this?” So, for some people they may see previous events when they were young. Some people, it doesn’t matter what the previous event was. They just see that this is a habitual emotional reaction that I have. And it’s just, like, push-button. This situation, boing, I react this way. And to say, you know, this is an old habit, it doesn’t work, I don’t need to keep doing it.

And you might say, okay…. Looking where that habit came from and seeing previous things, saying, okay, that’s what I did at that time because that’s all I knew. But, now I know something else. So I’m going to set a new habit in my mind.

But I don’t think it’s always necessary to go back in the past to see…. Some people may find it helpful. Some people don’t. But just seeing, this is a habit that is not working.

[In response to audience] “So yes, this is something negative, but it only harms me. It doesn’t harm anybody else. So I can go ahead and do it.”

Again, I mean, that’s a stupid way to be thinking, isn’t it? That’s another stupidagio. Because in our heart, what we want more than anything is to be happy. And, what we do, it doesn’t just have implications for ourselves. It has implications for other people.

And what I think of is like the law is saying that when you’re riding a motorcycle you have to wear a helmet. And I know many bikers hate that law. And they say, “I don’t want to wear a helmet, and if I kill myself it’s my business.” But I really disagree. Because, if there’s an accident, somebody else is going to be involved. And if you die, it’s going to make that other person feel awful, even though it was an accident. So out of care and concern for other people…. You may not care if you die, which I think is…. I don’t believe it. But, you know. Even if you don’t care, somebody else is going to care. So please, for their benefit, you know, wear the helmet. 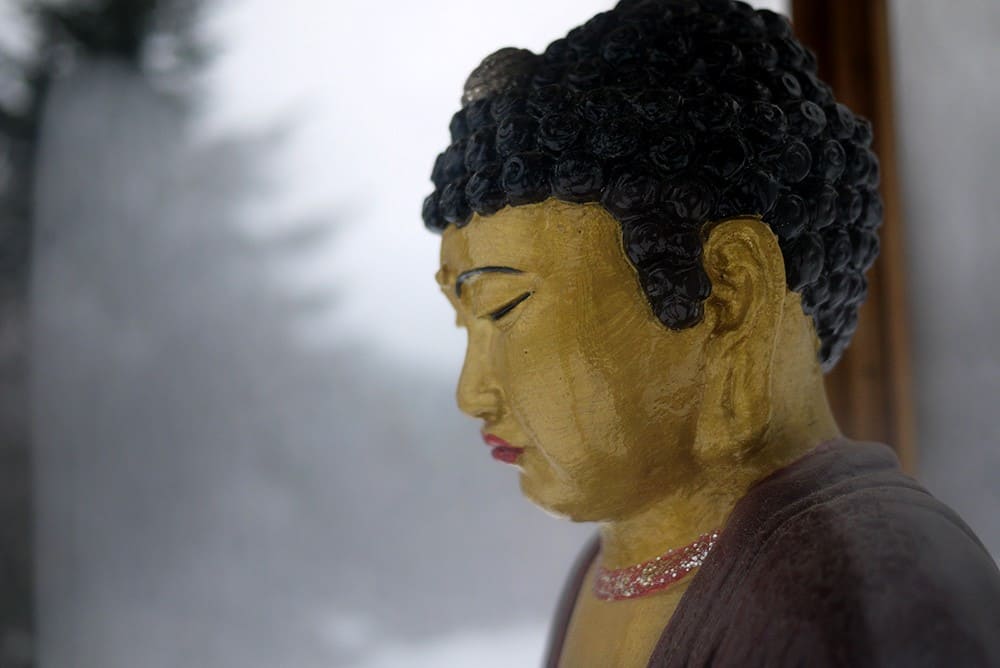 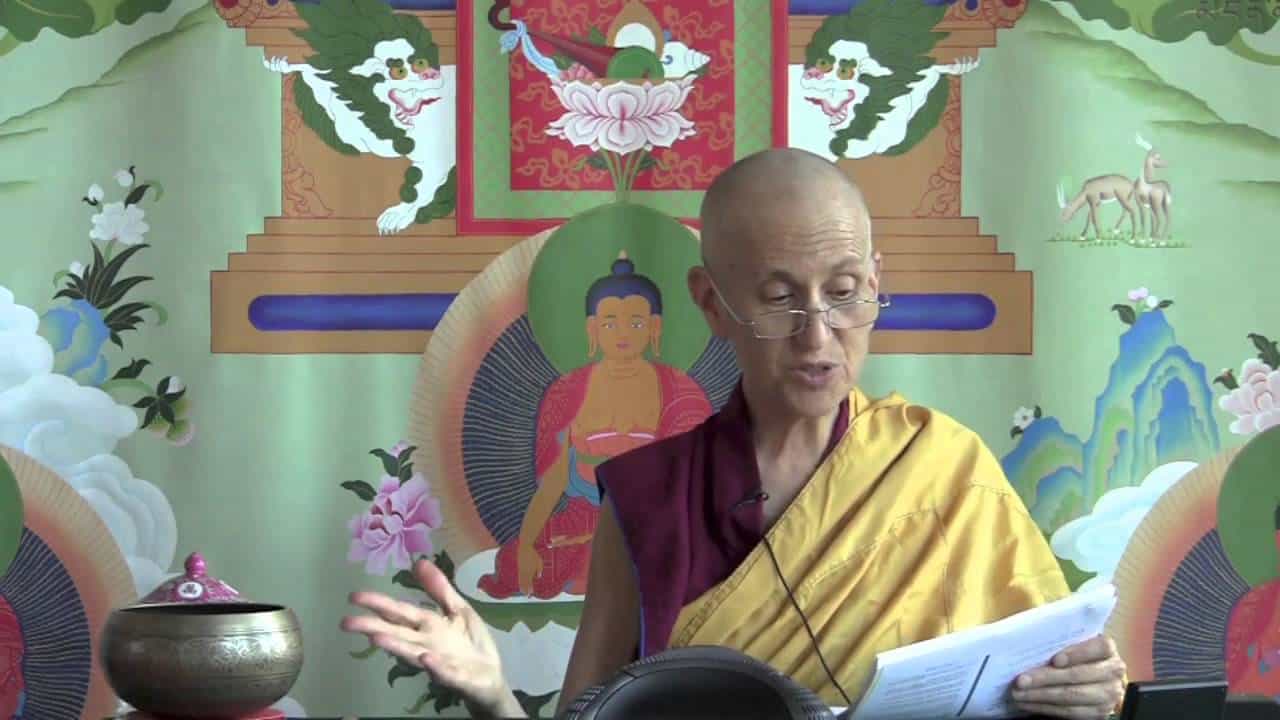