Verse 26 says, “What is strong and deadly poison that, although small, brings great pain? Small acts of negative karma done without regret or application of the antidotes.”

What is strong and deadly poison that, although small, brings great pain?
Small acts of negative karma done without regret or application of the antidotes.

When we study the ten non-virtues, we can make a really strong effort to avoid the really big ones. I don’t think so many of us have a problem with not killing human beings, you know? Or…. Well, I don’t know about theft. Because people can do a lot of things—not by breaking into people’s houses but by cheating people over large sums of money. Or by sleeping with other partners.

We try and abandon the really gross ones, which are already hard enough. But then there’s all the smaller ones, you know? Killing insects. I’m not here talking about accidentally doing it, but deliberately doing it.

When I go to Singapore they always ask about this one because they have all sorts of white ants there that eat in the houses and they somehow want me to say that it’s okay to kill them, as if I’m giving absolution. But I can’t do that.

Things like that, deliberately killing. Or taking small items that aren’t ours and keeping them. Maybe we don’t rob banks or we don’t extort money from others, but we cheat at our workplace, and if it’s enough money that a court case could be brought against you or you could be arrested, that’s a big negativity. But even if it’s just pencils and pens and other things, paper, that we take that isn’t ours, it’s small.

Same thing with flirting with people who are not partners. This is in the case of lay people.

There are all kinds of negativities that are smaller and so we tend to rationalize them or overlook them. So it says, “We do them without regret.” So we rationalize. “Oh, this had to be done for this and this reason. So I don’t really regret it.” And especially about the lying. People really justify that, I think, a lot. The lying and the cheating.

And then because there’s no regret then we don’t do any purification either. Because regret is the first step to applying the antidotes and doing the purification process. So then these small things, if we don’t purify them, they gestate, they stew in our mind. And they become bigger. Or they ferment in our mind. That’s a good word. They ferment in our mind and turn really bad. And especially if we make that a habit of doing small negativities, just doing that habit makes it easier to again do it and do it and do it, to create more and more negativity, and it gives leeway to the mind to eventually create that same action, but in the form of a big negativity.

We have to be very, very careful about that kind of thing. And really use the four opponent powers to purify even small negativities.

It’s important to have all four of the Four Opponent Powers. And to apply them not only to big negativities, but also to the small ones. Because otherwise they become “strong and deadly poison.”

There’s one of the properties of karma, remember, that even a small action can bear a big result, in the same way that a small seed can grow into a huge tree.

When we think about this it really helps us to be more mindful of our precepts and our values during our daily life. And also to have more introspective awareness and really check up with what we’re thinking and saying and doing.

At first our minds are very gross and so the negative actions seem very gross. It’s like, “Okay, I don’t kill anybody, that’s it.” But then as you begin to practice and really look you begin to see all sorts of different ways in which we…. Maybe we don’t kill others, but we harm them physically. Yes? Things like that. In the same way, we may not rob a bank, but we definitely take what hasn’t been given. Or we don’t lie about our spiritual attainments, but we take things that don’t belong to us. Or, more often, we borrow things and don’t return them.

So all of this, to help us prevent creating more negativity, and then also to apply the antidotes to purify whatever we have created. And when we do this consistently, especially like at the end of the day to review what we did during the day and confess and purify. Or as soon as we notice ourselves doing something that isn’t so good, to immediately in our own mind regret it. Then this is ways to really reduce the impact of that karma and to begin the process of purifying our minds. And that purification is so important in order for us to gain the realizations of the path. Otherwise it’s like you listen to teachings and it’s like pouring nectar into a filthy vessel. Because our mind is completely filled with muck from negativites. And we hear the teachings and then it’s difficult for them to really have an effect. But the more we purify and create more merit then we’ll see the stronger effect that the teachings have on our mind.

[In response to audience] So you’re really talking about the mind expanding to consider more welfare than our own? The welfare of the environment, the welfare of the sentient beings we share the environment with. And also about growing beyond the mind that says, “I’m only going to do what I feel like doing. Everybody else can do the rest. I don’t feel like doing that.” You know? “I’m going to get dirty doing that, this isn’t a very pleasant task…. It’s not the right time…. I might stub my little toe….” You know? And so just kind of leaving the things that we don’t want to do for other people to do.

And this is actually one advantage of living in a community is that you can’t continue doing that for too long. The environment we have here creates the conditions so that we have to expand.

[In response to audience] We have to understand what karma means. Karma means volitional action. That means intended action. Now there are stories in the tradition of accidentally doing something and experiencing some kind of effect. But by and large, one of the foremost conditions to create a full action is the intention and the motivation. So absent that, it’s not going to be a full karma. Okay? So we have to understand that.

But having said that, you mention the thing about getting in our car. So we know when we drive somewhere we hit insects. We don’t intend to do it, but it happens. So as a way to avoid that as much as possible then we try not to drive as much as we can. And so this means monitoring ourselves. We don’t just, like, “Well I need something so I’m getting in the car to go to town to buy it.” Or, “I need this today, and that tomorrow, and that the next day.” It’s that you coordinate your shopping so you do all the things at once. Then you’re on the road less, you kill fewer insects, you pollute the world less because you don’t use so much petrol.

But I find people, by and large—especially in developed countries—really quite unwilling to change their driving habits. And I think for some people their car is their refuge. You feel bored, you don’t know what to do, you feel upset, you get in your car and you drive somewhere. Without realizing the beings that are killed and how much we’re polluting because of it.

This is what I mean by the more you get into thinking about these things, the more you discover subtleties that before you would never have thought of.

[In response to audience] Yes, as Guru Rinpoche said, “My view is high as the sky but my attention to conduct is like small, minute particles.” I don’t know that Guru Rinpoche said that about himself or he was saying that about people around him. But yes, we like to think of ourselves as having the view and being great tantric practitioners, and great this and that, and yet how we keep ethical conduct, which is the foundation of it all, often tends to be quite lackadaisical.

Then there’s also the intention of confusion, where people have wrong views and they commit negativities motivated by their wrong views. Such as animal sacrifice. People think, “Oh, this is a virtuous thing to do, to sacrifice animals to please the deity.” Actually they’re creating a lot of negative karma. Or the motivation of many people: “To fight for my side is going to bring me rebirth in a good realm.” Again an ignorant motivation that justifies killing.

What you’re talking about is a little bit subtler than that. But it also falls under the realm of ignorance, when you’re saying we say, as an act of intention, “Well I just don’t care.” And then lots of times do things that are damaging to others.

But then besides that, there are things where we don’t have that intention not to care, but we’re just out to lunch. We don’t mean any harm, but we’re really lacking awareness. And so there might be some small something due to that. We might be quite insensitive to others’ feelings and say something that’s harsh. But then if you don’t know that that person is so sensitive and you don’t have any motivation to harm them, then I don’t think that’s really negative. Because that person feels hurt because of the way their mind is operating. And where are they going to go in this world where nobody’s ever going to hurt them as long as they’re super-sensitive.

So there are all sorts of different factors. If you know somebody is very sensitive and you deliberately say something that you know is going to get them, then that’s a different ballgame. There’s definitely the intention to harm there. 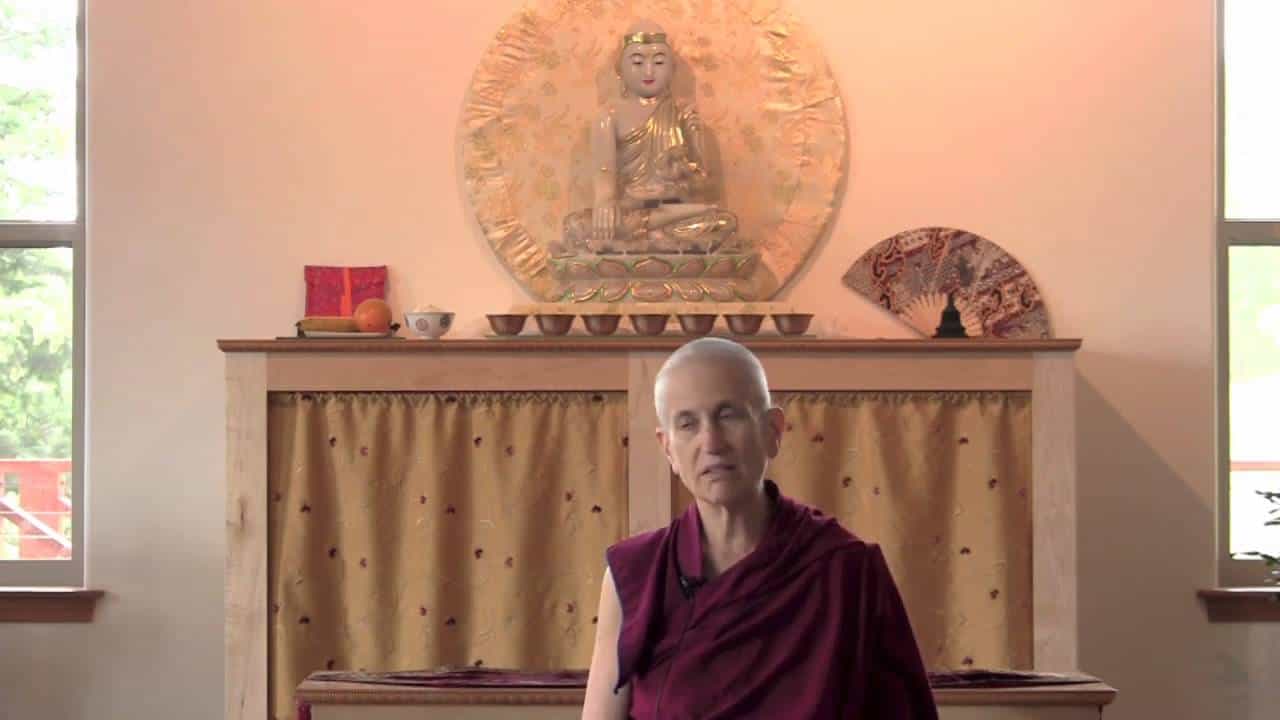 Verse 25: The negative omen of exaggeration 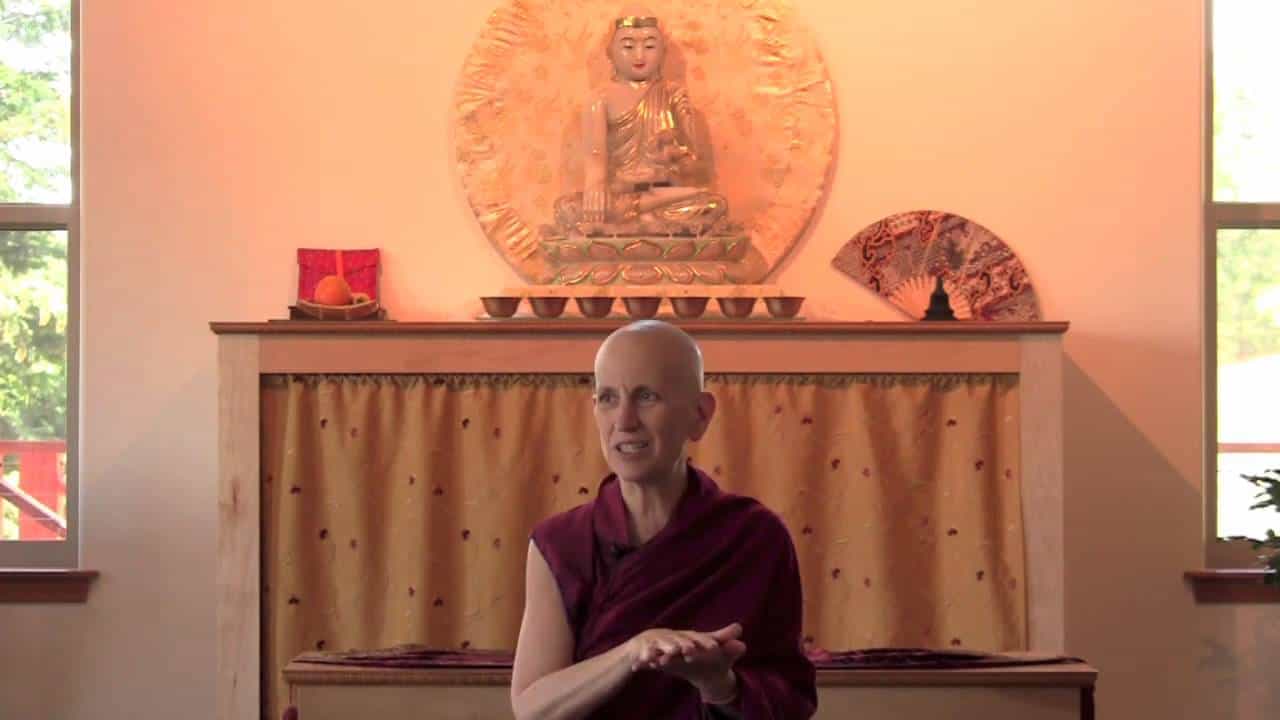