What is the resolve not undermined by others?
To guard oneself with awareness against negative influences from others.

Here it’s quite interesting to think that in each moment we are having intentions, in each moment we are making decisions. So this mental factor of intention, which some tenet schools say is karma, that we’re always having intentions, we’re always making decisions, we’re always making choices. And each choice we make in each split second could take us in a different direction. So at any moment there are actually a whole lot of possibilities depending on what we choose to do in that particular moment. When we’re not aware of that, and when we’re not aware of what’s going on in our mind, then we just do everything habitually, on automatic, through the force of just the habit and the force of familiarity. And so then when we look in our lives we see ourselves playing out the same decision, or playing out the same scene, again and again and again in our lives. And if these scenes are ones that bring us more confusion and unhappiness in our lives then we don’t get anywhere at all, except to sit and say, “why me?” Because we’re just acting out of habit, replaying the same thing.

You’ll see people who get into one dysfunctional relationship after another, and all the relationships are somehow quite similar, because the person’s just reacting out of habit. Or, if we have a certain self-image, like it’s been coming up, if we think, “Well, I’m not very smart,” and then we just keep on having that thought again and again and again, then it becomes how we see the world, how we act, and we never learn anything, basically because we don’t even try to because we’re already telling ourselves we can’t.

When we really look at every area in our lives, the areas, especially, where we don’t feel good about our behavior, or good about our emotions, to really stop and consider that at every moment we actually have a choice about what we can do—if we’re aware. If we’re not aware, then basically the choice is gone because it’s just the impetus of the past energy that carries us. But if we have awareness then we can shift and go a different direction.

I was saying the other day how sometimes we do very small things that can have big impacts, and when we really think about this—each moment is an opportunity—then small moments can have big impacts in either completely taking us in another direction, or in repeating old habits, or in just acting out what comes up in the mind at that moment without any clarity about it.

Again, I come back here to the situation in Ferguson. There was one moment where Michael Brown chose to walk in the middle of the street. Now, what would have happened if, at that moment, he had chosen to walk on the sidewalk instead? Everything would have been completely different. Everything. There was one moment where Darren Wilson, according to the way the police in Ferguson worked they didn’t step out and talk to the people or get to know the people, they just screamed out orders as they were driving by. (Clearly that doesn’t create very good police community relationships.) So here’s Michael in the middle of the street. That’s one thing. But then Wilson decided to scream out to him, “Get out of the middle of the street.” Now, what would have happened if, instead of doing that, he had gotten out of the car and gone over to talk to Michael Brown? Or what would have happened if he didn’t make such a big thing out of somebody walking in the middle of the street? Because he would have remembered that when he was a teenager he did it, too. So there were all these little moments where people made certain decisions, and probably without very much clarity, but just by the force of previous habits. And it seemed to me, in the whole thing, that one quality they shared in common was neither one of them liked the other one telling him what to do, or seeming to be more powerful. So both of them were on this thing of, you know, “I’m going to be more powerful.” I bet you that, for different reasons, that that’s probably been some kind of habit pattern in both of the lives. Maybe Michael’s reason was because of experiencing racism. Maybe Darren’s reason was what happened in his family, how he was treated as he was growing up. So it may have come from different directions, but that same mental factor of “I’m going to be on top no matter what”—which we all have, don’t we? And we all go about acting it out in different ways. Guys often act it out physically. Women find other ways to do it. But you see, just a small decision sets off whole networks of results that influence not only oneself but so many people.

If we can bring awareness to these kinds of choices that we’re making, then there’s the possibility in each moment of setting things going in a different direction.

And I just remember one of the guys I was writing to in prison who had a 20-year sentence for drug dealing—he was apparently one of Southern California’s biggest dealers, and he made a fortune out of it. Had many cars, blah blah blah. But when sitting in prison for a number of years he had plenty of time to review his life, and he wrote me and said, “You know, I can see how I got here through making many, many decisions earlier on in my life. Some of them even small decisions that, I decided to do this so I met that person who influenced me in this way and then I got involved in that and da da da….”

“To guard oneself with awareness against negative influences from others.” Like we were talking, who we hang around…. The people that we’re with are one of the most important influences we have. And yet very often we don’t really think about it. We don’t sit and think, “Oh, I’m going to be very much influenced by the environment I put myself in and by the people I hang out with.” And we don’t sit and look at the environments we choose to be in, the people we hang out with, and think about well, how are these going to influence me? We don’t think about that. We just … well, whatever seems like it’s going to make us happiest at that moment, whatever looks like more fun, will bring us more of whatever it is we happen to be wanting at that moment, we just go for it out of the force of attachment and self-centeredness, without ever thinking, “What is the long-term result going to be?”

We can see, as Dharma practitioners, that the environment we put ourselves in is crucial for being able to keep together a Dharma practice. Because we’re not really strong in virtue left on our own. Especially if we’re surrounded by other people who want to sit and…. I mean just something seemingly innocuous in society like sitting down and watching a movie on Saturday night. And yet not thinking, “What am I putting into my mind by watching this movie and the sex and the violence? What is that putting into my mind?” We don’t think about that. So as a result we put ourselves in all sorts of situations that actually water the seeds of our non-virtue when in fact we want to change, but we don’t put ourselves in the situations or hang around the people who are going to water the seeds of virtue. Or sometimes we’re around the people who will water those seeds, but because of our previous habit we don’t like it. You know? And we find this, you know, you’re in the monastery and you’re in a bad mood and somebody comes up to you and says, “Gee you seem a bit angry today, is there some way I can help? Or do you want to talk about it?” “NO! Leave me alone!” And so just out of habit, we’re even in a good environment or around good people but we can’t see it, and so we can’t take advantage of it. So the whole thing is about really sitting and thinking about these things so we can be careful in each moment with what we decide to do, knowing that it influences…. You know? You make a left turn here, it’s going to influence so many other turns you make down there. Which are different than if you make a right turn. Sometimes you might make a right turn and then come around the block and then go left, which was the right way. That’s okay. But sometimes you make the right turn and you get completely lost in a labyrinth.

[In response to audience] You’re talking about a job interview for a minimum wage job but in the interview the guy asked you “tell me about your friends,” and how…. That’s actually a very smart question to ask on an interview because it really tells a lot about the person, doesn’t it?

[In response to audience] You know, the idea of Darren Wilson getting out of the car and talking to Michael seems impossible from the viewpoint of: he was trained as a cop in a certain way, and that particular police department trained its cops in a certain way. Other police departments do not train their cops to act like that. They tell their cops to go out and walk and get to know the people who live in the community. But again, because of force of habit, force of training, then…. And this was his excuse all along, is “I just followed protocol.” As if following protocol makes what you do virtuous.

Also, just in terms of little decisions, it makes me think that my being here today depends on one day in 1975, making the decision to go to Bodhi Tree Bookstore and looking at the flyers on the wall. How innocuous is that? And it depends on the one choice by the nun who put the flyer there to go to Bodhi Tree Bookstore and put a flyer there. She could have not gone there. She could have gone to some other place. I would have never found the flyer, met my teachers, (etc). And so you see sometimes these small things in your life that have huge ramifications later on.

[In response to audience] So when you were in Seattle on Capitol Hill…. (Capitol Hill has every type of person there, and whatever could possibly go on at Capitol Hill goes on. It’s one of those neighborhoods.) And yet the police were out there walking the streets, they knew the shopkeepers, you live there you would see the same police officers. So you would have the feeling, “Oh, if something happened I know these people, I can go to them for help.” Whereas if they were policing just riding by in cars, you can’t even see their faces, and there’s no feeling of connection. 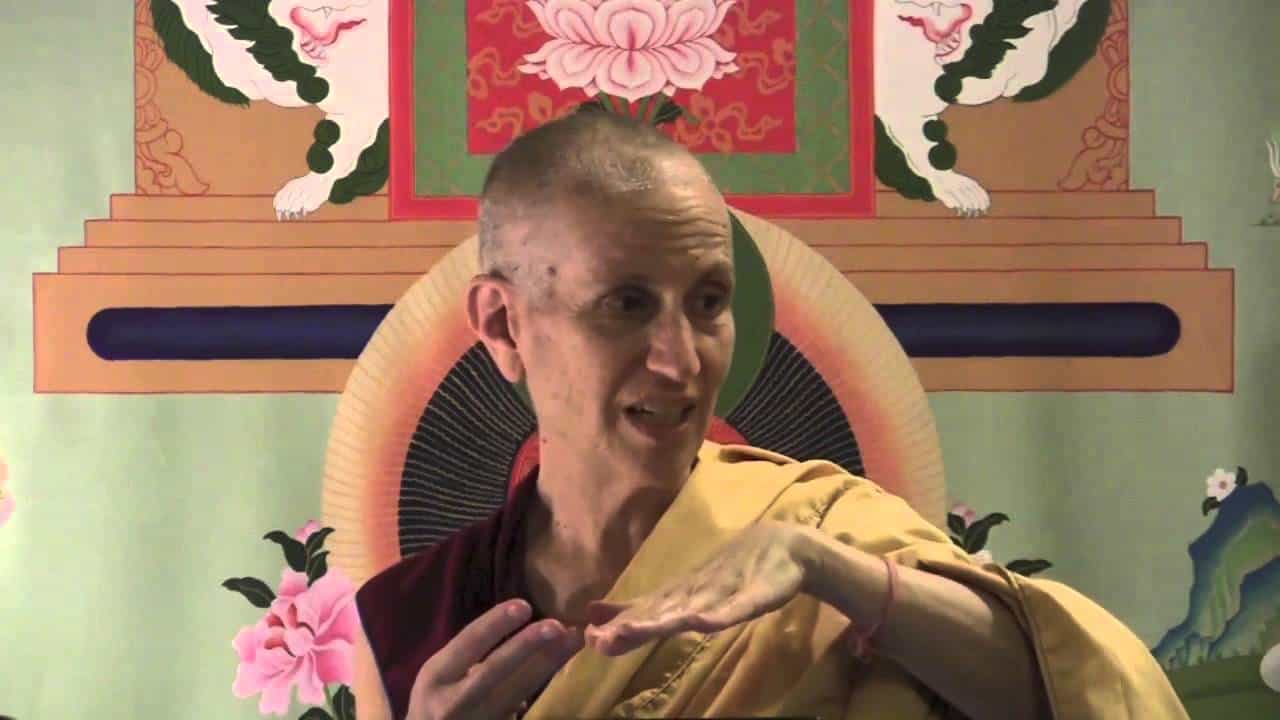 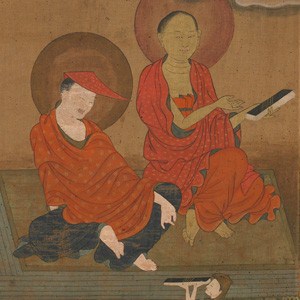