Verse 1: The realms of samsara

Verse 1: The realms of samsara

Yesterday we started Gems of Wisdom, the poem by the Seventh Dalai Lama. We read the prologue. Today we’ll start with the “Promise to Compose.”

In the Tibetan tradition when somebody is composing a text they usually write a verse promising to do it, a verse in which they humble themselves and say, “I’m just repeating what the Buddha said and trying to help explain it.” Not like nowadays where in the front of the book they have the bio and “the greatest, you know, best selling, fantastic this and that,” who you’ve never heard of, and who doesn’t know much, but is majestically displayed at the front of the book. Not like that. So here it’s he’s being very humble. He says:

A magician manifests a double, one becomes two.
A questioner and an answerer appear and string this garland of precious gems.

That’s kind of cool. Then you can make sure you only ask what you know the answer to. [laughter]

But I think the Seventh Dalai Lama is beyond that. He’s really expressing, telling you what he’s doing. He says, “One becomes two.” One person becomes the two, “a questioner and an answerer appear and string this garland of precious gems.” When he’s saying “a garland of precious gems” he’s alluding to Nargarjuna’s Ratnāvalī or Precious Garland, which Jangtse Choje Rinpoche is teaching this summer for people fortunate to go. And it’s a wonderful text where he really goes through the whole path. The Seventh Dalai Lama is connecting himself there, to that text.

Then he begins. The question that’s first asked is, “What is the great ocean most difficult to leave forever?”

Audience: The ocean of samsara.

What is the great ocean most difficult to leave forever?
Cyclic existence, the three realms which toss in waves of pain.

The desire realm is for beings afflicted by desire, where desire is the foremost thing, you get attached to everything, you want everything, your mind is continually focused outward negotiating the external environment to get what you want. Guess what realm we’re in. This is it, isn’t it? We are completely captivated by our senses. Completely enthralled by our senses. Obsessed by them. And reactive to them. Everything that we come in contact with we react to. Most often by getting attached to pleasant things, getting upset and angry about unpleasant things, and just being apathetic about the rest.

The form or material realm, those beings have actualized the four jhanas (or in Sanskrit the four dhyanas). Those are states of meditative absorption where you can remain single-pointedly on an object as long as you want to. It’s after you have attained serenity, or samatha, then you enter the four jhanas (or four dhyanas). It’s called form or material realm because those beings have a body but it’s of a very ephemeral kind of form, it’s not like ours that suffers from great illness and so on.

Then the beings in the formless realm or immaterial realm don’t have—as far as the Abhidharma is concerned—they don’t have a body. Tantra would say you still have the extremely subtle wind, but as far as the Abhidharma, they don’t have a body and they’re really immersed in their meditative absorptions. They enter them when they’re first born in that realm and don’t come out until they die, until they pass away from that realm.

Captivated by the senses

It’s interesting when you think, desire realm. Beings captivated by the senses. Because we’re born in this body and we take it so much for granted that everybody—and the way it has to be—is that you’re born in a gross body with sense objects around you and that you react to that. We can’t even think of another way of existing, even within samsara, let alone having the mental body of bodhisattvas or whatever. We think that everything in our environment is so important, and all the people we meet are so important.

From the bodhisattva perspective, yes, people are important. But we’re not looking at people from the bodhisattva perspective. We’re looking at people in terms of: “Who can make me happy? Who can make me feel secure? Who am I attached to? Who do I hate and want to get away from? We’re in this constant thing with people, situations, objects, positions, you name it. External things to us, seeing them as inherently existent, then we’re attached, we’re averse, we space out, and our minds are totally uncontrolled. Sound like our experience? Completely uncontrolled. And the thing is, most of the time we don’t even realize it. I mean, people who have never heard the Dharma aren’t going to realize it. But even as Dharma practitioners, when we get attached to something we forget that all of this doesn’t have to be like this, and isn’t that crucially important. But rather we get totally dissolved and absorbed in it. And then suffering comes. Doesn’t it? So much suffering.

The bliss of not being captivated by the senses

That’s why the beings who have single-pointed concentration, who’ve actualized samatha (or serenity) and those in the form realm and formless realms, they experience bliss that we can never even think of, because they aren’t in constant reaction to sense objects. They’ve temporarily suppressed the attachment and aversion and so on to sense objects, which is why they say that when you’re in these concentrations it’s so blissful. No concern with sense objects, and wrong motivation with people, and all this kind of stuff. So you don’t have to stain the beds, and you don’t have to correct the manuscripts for how the footnotes are done, and you don’t need to transplant the grass or clean the kitty box. You know? Build a building….

From the bottom to the top we have hellish beings. We have the hungry ghosts or most of the kinds of spirits are in that realm. Then we have animals. Then human beings. And then sometimes when they just speak about five desire realms, then the fifth one is the god realm or the celestial realm. When they speak about six, then the fifth one is the demi-gods and the sixth one is the god or celestial realm. The demi-gods are jealous of the gods…. And this is in the desire realm. But when you talk about the six realms, or five realms, when you’re talking about the god realm, you also have to include the form realm gods and the formless realm gods. So those are the two-thirds that are not part of the desire realm, but they’re included when we talk about five or six realms.

What is the great ocean most difficult to leave forever?
The three realms of cyclic existence which toss in the waves of pain.

Audience: Can you go from one realm to another within the same lifetime?

VTC: We’re each born in a specific realm each lifetime. And that realm means the body and mind that we’re born with. Now, let’s say you’re born in the human realm. If you practice the methods to gain samatha, or serenity, then you can attain that and go into the jhanas and dhyanas, and then your body remains in the human realm but your mind has become a jhana consciousness. So when you’re in that state of deep absorption, it could be a jhana consciousness, it could be a formless realm consciousness. But when you come out of it, then you’re back into your human consciousness. And your body still remains a human body even though you’ve actualized those states of absorption.

If you attain the formless absorption, your mind can go to a formless consciousness. But you still have the same body. The human body. You don’t have a formless body. Because you were born in the human realm. You’re sitting there meditating. You know. Under the tree. It’s not that when you enter the formless realms your body under the tree disappears. It’s still there. 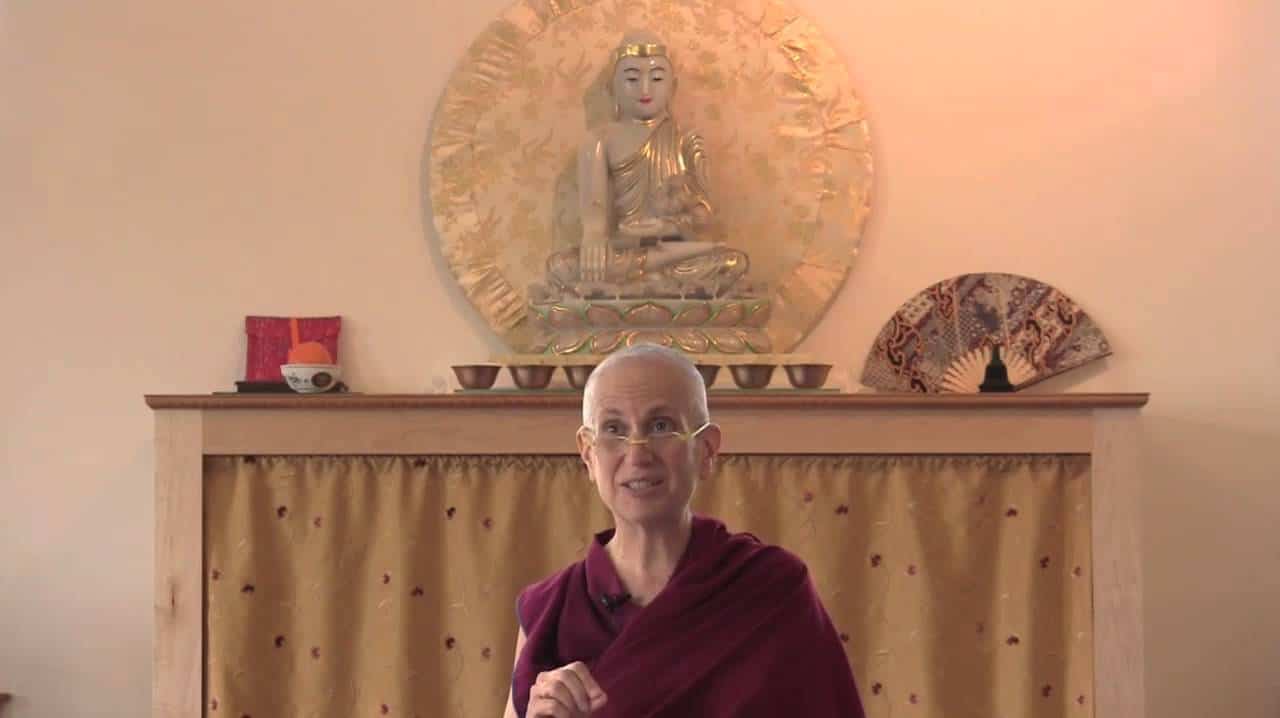 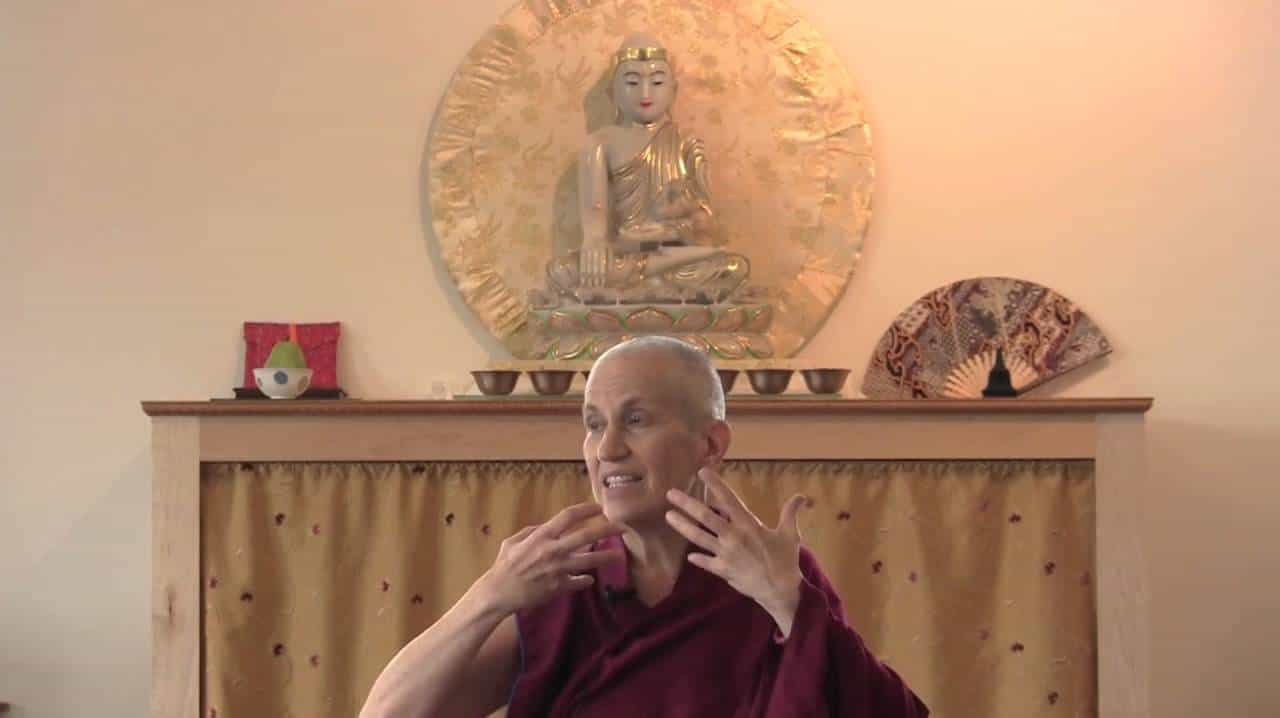