Verse 30: The navigator in samsara

Verse 30: The navigator in samsara

Who is the navigator leading us to the various realms of suffering?
The power of karma and afflictions that bring us into the lower realms.

That verse is talking about the beginning part of the twelve links of dependent arising. The twelve links describe how we enter into samsara and also how we can get out of it.

The first link is ignorance. Here, specifically from the Prasangika viewpoint, it’s the ignorance that holds both persons and phenomena to have their own essence, to exist from their own side, to be inherently self-enclosed things. And that’s the way we see things, they’re objective, out there. They don’t depend on being conceived and labeled. They don’t depend on parts. They don’t depend on causes. They’re just there. And so based on this then we generate a lot of afflictions, primarily confusion, attachment, and anger. So those are called the “three poisons.” So based especially on reifying the sense of our self. Then we want to protect our self at all costs, bring every happiness to our self, get rid of any possible suffering…. So we develop attachment for the things and people and situations and words and whatever that we think benefit us, and attachment to the happiness that they give us…. And we develop aversion to pain and to the people, things, situations and so forth that we think threaten us…. And then we remain confused or bewildered or ignorant about karma and its effects, so we don’t really know how to create the causes of happiness and abandon the causes of suffering.

Then, motivated by these three, we do a lot of actions—which is simply what karma means, karma just means action—of our body, of our speech, of our mind. These actions leave seeds, or zhigpas—having-ceaseds. And then when the cooperative conditions together then these seeds, or these “having-ceaseds,” ripen and they influence what realm we’re born into.

If we’ve wondered sometimes “why was I born me, in the situation that I’m born in,” this is it. Because of our own previous afflictive emotions, our ignorance, the karma we created…. Why do we sometimes encounter situations where we lack what we need? Whether it is physical things or friendship, or whatever. That’s often because we were attached before and did a lot of harmful actions out of attachment, to get what we wanted. Why do we experience situations that we don’t like, that we find difficult? Very often because we had anger in the past and were hostile towards others.

Sometimes the anger can produce the situations in which we lack something we need, and the attachment can produce situations in which we encounter what we don’t like, so I’m not giving a definitive thing here. But realize that, especially when we encounter obstacles or things that we think are not fair, or criticism, or anything like that, to realize that it’s the product of our own afflictive emotions. Similarly, when we encounter good experiences in our life and many opportunities, instead of taking them for granted and becoming complacent, to recognize that, although these were motivated by ignorance on the bottom level, we still managed to have some kind of virtuous attitude. So we were generous or we had good ethical conduct or we practiced fortitude or whatever, generated love and compassion, and so because of that then we experience good things in our life. So there’s never any reason or purpose in blaming anybody else for what we experience, or for praising ourselves for what we get. Because it’s all dependent on previous actions.

Of course, creating the circumstances in which either destructive or constructive karma can ripen, that we play a role in in this life. If our mind gets very negative and our actions get negative this life it becomes very easy for negative karma created in the past to ripen. When we have a positive attitude it becomes easier for virtue to ripen. Sometimes negative karma will still ripen when we’re practicing the Dharma, but then we try and see it as purification of something that could have ripened in a situation that would have been a lot heavier and more unpleasant.

Be aware of ignorance and afflictions and karma and how they shape our experience. And when we are then we get a certain kind of power because we have the knowledge, and hopefully we’ll develop the wisdom, to then create the kind of circumstance that we desire, instead of simply acting out any old thought that enters our mind. Which can be really dangerous.

[In response to audience] You’re saying the awareness of death makes things more urgent. I know every evening I check my alarm clock to make sure it’s going to go off the next morning, and it’s like, oh, one more day is over. One more day…. And just to see how quickly things go and that we ourselves are going towards our own death. And there’s no way to stop it. And so then the question is how do we live a really vivid, rich life that has meaning and purpose? And not waste our time protecting our ego.

[In response to audience] Very definitely. You’re saying that thinking about karma helps you to accept responsibility for creating the causes for what you encounter. So in that way it pulls you out of the victim mentality. And the victim mentality is quite a hole. We get stuck in that and, boy, we can’t move. Because we give out power away. If my unhappiness is due to what other people did to me, then I am powerless. There’s nothing I can do. And that’s a horrible mental state. Plus being an untrue, false mental state.

[In response to audience] Okay, so you’re saying for when we see ourselves as victims one thing is to do volunteer work and help others, pull ourselves out of ourselves. And another one is to be around people who have an understanding of karma. Because they’re not going to buy into our self-pity story. Because our friends who buy into our self-pity story actually aren’t necessarily the people who help us the most. It’s the people who challenge us, who say, “You can do something different. Don’t blame the world.”

We don’t like that. We want a little bit of self-pity. But self-pity is really a pit. [laughter] A pity pit. 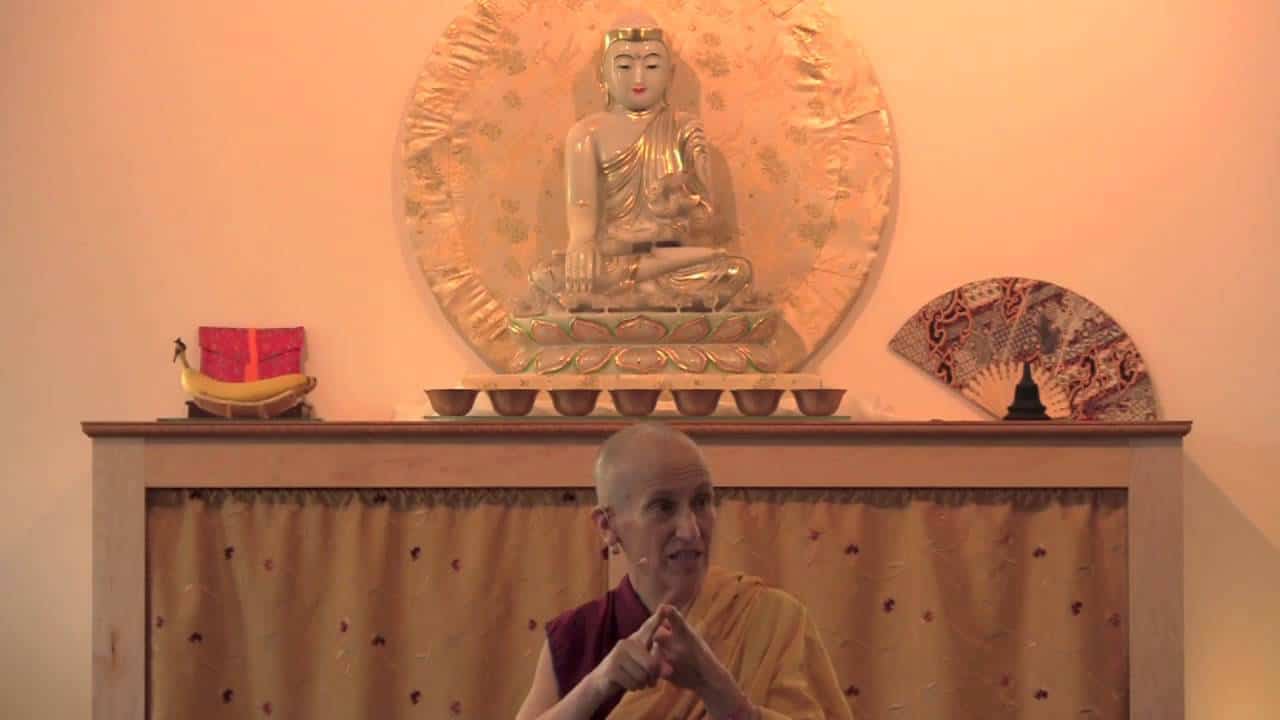 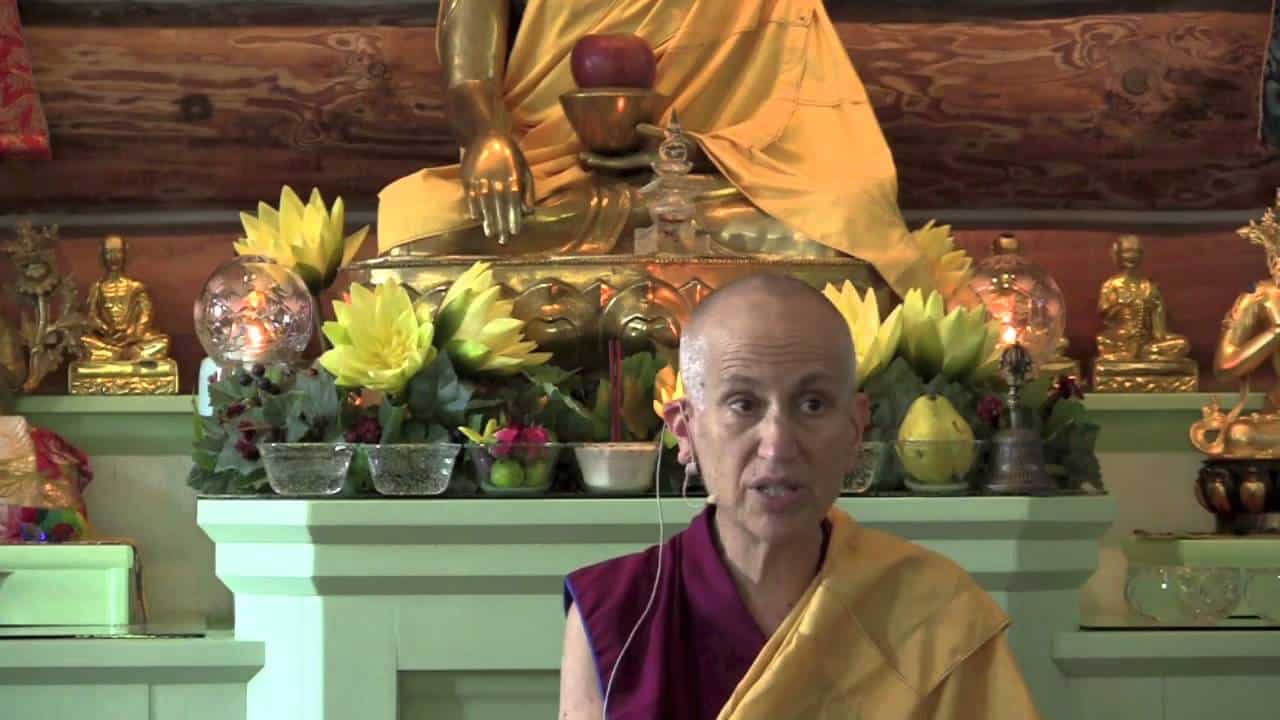