In short, I will offer directly and indirectly
Every benefit and happiness to all beings, my mothers
I will practice in secret taking upon myself
all their harmful actions and suffering.

“In short.” This is the essence.

“I will offer directly and indirectly every benefit and happiness to all beings, my mothers.”

Seeing sentient beings as our parents, especially our mothers, and developing a view of them as heartwarming and endearing, feeling close to them because they’ve taken care of us—not just in this life, but in many, many previous lives.

They say that if you have an issue with your parents, and seeing sentient beings as your parents and seeing them as kind, if that provokes a lot of confusion in your mind, then think of whoever it was who brought you up and whoever took care of you when you were young, whether that was another relative, or a caretaker of some sort, or whoever it was.

And I think eventually it’s good to be able to focus on our parents, too, because when we can see their kindness, then it will help us heal from whatever it was that happened when we were young that was disturbing to us. Whereas if we always hold this view of our parents as mean, and all of our hang-ups as coming from them, then I think that adversely affects the rest of our lives. Especially for people who become parents themselves, if they feel that way about their parents, then they’re kind of setting up their kids for feeling that way about them.

I think it’s very helpful, really, to look at our parents’ situation and to realize that they did their best. No matter what the situation was, given their capabilities, they did the best they could. And that not everybody had fantastic capabilities, or good situations when they were raising families. Some people, you’re raising a family and you’re sick. My mother had cancer when I was a young kid, and yet she was raising two kids. Other people have financial problems when they’re raising young children. Other people are in war zones. Other people are refugees. Other people themselves came from very damaged families. So instead of expecting our parents to be perfect (whatever that means), to really see that they did their best. And the bottom line is that we have our body, which is the foundation of this precious human life, that gives us the opportunity to practice Dharma, we have that because of our parents. And even if they couldn’t take care of us, they made sure somebody else could. How do we know that? Because we’re alive today. And when we were little it was impossible for us to take care of ourselves. Somebody must have. So just really seeing that, that we did grow up surrounded by people who cared about us. And like I said, even if our parents couldn’t be the primary caregivers, they made sure that we had somebody who fed us and took care of us, and kept us healthy.

I think that’s important. And to really see the kindness of our parents. Because I don’t think it’s easy to raise kids. My mother always used to say, “Wait until you have kids, then you’ll see what I went through.” So I didn’t have any. But just watching and hearing stories from parents, it’s a lot of hard work to raise a child. And so to really give them credit for everything they did.

I say this because some years ago I went to a conference in Seattle, one of these “inner child” conferences. I was invited to speak at a breakout session during it. So I went to the plenary session, and there was this guy there pacing the stage, and his big thing was how his father had promised to take him to the ballgame when he was young, and his father never took him to the ballgame, and he felt like he was cheated out of a childhood, and his father didn’t care…and on and on and on. They paid this guy. And I thought, “Oh my goodness. Because of not going to the ballgame, he’s carrying all of this with him. Wow. Kind of give your dad a break. It’s only a ballgame.”

Give our parents credit for what they did do, even though there was a lot of other stuff that happened, because hey, we’re in samsara.

I also think of Jarvis Masters, who’s an inmate on death row. Talk about a family upbringing, my goodness. Both of his parents were on drugs. The kids often didn’t have enough food to eat. And his mother sometimes beat the kids. His father did a lot. One day the father came home and was beating the mother, and the mother, when she knew he was coming in, she shoved the kids under the bed so the father would beat her and spare the kids. And one day Jarvis—who has become a Buddhist—when he heard his mother died, and he started talking to the other guys about the kindness of his mother, and one of them said, “Hey, I thought your mother was on drugs and neglected you.” And he said, “Yeah, but she was still very kind” and cited this incident where she herself took on being beaten by the father and saved the kids from it. So I thought, “My goodness, if somebody who’s on death row can see himself as the recipient of kindness from his parents in a family like that, then it should be possible for the rest of us, too.”

And you can see that when you come to that, then your own heart softens, and there’s a lot of forgiveness in there, which I think is very helpful, and very needed.

That talks about two words in the verse. We’ll get to the other words next time. 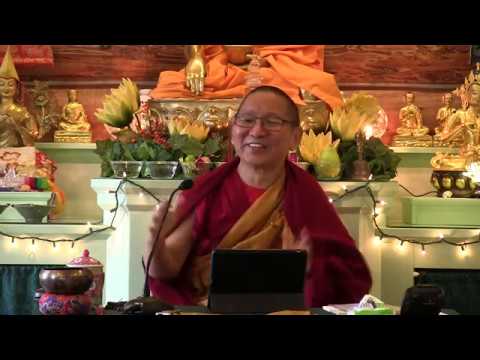 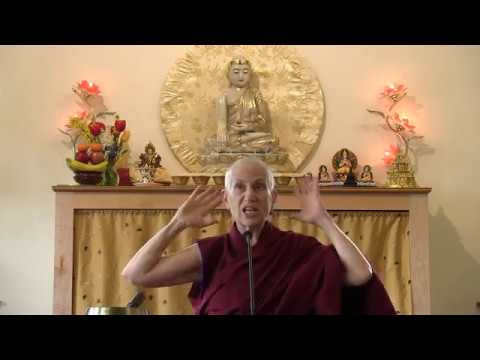