When others, out of jealousy,
mistreat me with abuse, slander, and so on,
I will practice accepting defeat
and offering the victory to them.

That’s talking about when people are jealous of us, and then try and undermine us. But before we get into that, I think it’s useful to talk about when we’re jealous of other people, and try and undermine them. Although I know nobody here has that problem, this is talking about other people who are filled with jealousy. But nobody here is like that. But just in case you know somebody is, I’ll talk about it and then you can tell that person. Okay?

Jealousy I think is one of the most painful things. At least in my experience. When I am jealous, my mind is just completely contracted in pain. Because I’m comparing myself to somebody else and I’m losing out, and there’s nothing I can do about it, and I’m sitting there fuming and trying desperately to think of some plan to get even, to show how I’m actually better than the next person. But I feel crummy about myself for thinking about those kinds of plans. And yet, the situation is intolerable, that this person has what I deserve. And the universe isn’t fair, and etc..

They have a little slogan that is “Be careful of what you want, because you might get it.” With jealousy we don’t bother to really check up with what we want to see if getting it will actually make us feel happy or not. We’re just stuck in “I want it, I’m not getting it, and they have it.”

Regarding the trip to Asia that we just came back from. Venerable Wu Yin’s assistant, Venerable Jen Yi (you met her last year), she was there, because Venerable Wu Yin was there, and she was always assisting Venerable Wu Yin, and helping her walk and get seated, and things like that. Occasionally she’d help me, too, because Venerable Damcho wandered off somewhere, or was busy translating for someone else. The one time, I tell you, we came out of one of the ordination things and I don’t speak any Chinese, and this person is saying, “Come with me,” and they take me down to the second floor, and then they take me up to the fourth floor, and I don’t know where I’m going or where I’m supposed to be, and I can’t understand anything. And then finally the elevator door opens, and there’s Venerable Damcho talking to some people. And I wasn’t very happy.

It seems like maybe Venerable Damcho feels that some other people (nobody here, of course) might be jealous of her because she travels with me, gets to hear me when I tell her that she made a mistake. But of course, I don’t tell you when you make any mistakes because you don’t make any mistakes. And even if I told you, you’d all cry and run down the hill. So it’s useless.

Jealousy is extremely painful, and it’s really a dead end. So it’s good to try and do something about it. Otherwise we just really stay stuck in a very painful state of mind. What do you do about it? The last thing you want to do, which is be happy about the other person’s good fortune. Because isn’t jealousy a mind that is unhappy about somebody else’s talent of good fortune? It’s a mind that can’t stand others’ happiness and virtue. Now, what kind of mind is that? Is that a virtuous mind? No. It’s a pretty nasty, ugly mind, isn’t it? Because we’re sitting here, “May all sentient beings have happiness and its causes, May all sentient beings be free of suffering and its causes,” and “I can’t stand that that person gets to do what I can’t do. And they have that talent that I don’t have. And they have the opportunity and I’m looked over. And the universe is so unfair.” “May all sentient beings have happiness and its causes.”

There’s some disconnect here, between what we say every day in our practices and what’s really going on in our mind.

It’s really something that we need to work on. Otherwise, saying the four immeasureables or generating bodhicitta is kind of like a joke. Isn’t it? May all sentient beings have happiness, except the people I’m jealous of, and may they suffer, and may I take all their happiness and have it for myself because I’m better than them anyway.

What kind of person does it make us when we’re jealous? It’s kind of like we just revert to either being a child who’s jealous of our siblings, or being a teenager. Remember your teenage jealousy? Ugh. It makes you enough not want to ever come back and go through teenage years again. Teenage jealousy is horrible.

Sometimes just being aware of how painful the jealousy is can be a very good motivator to just drop the issue. Because the jealousy is all made up by our own mind. Isn’t it? It’s created solely by our own mind. There’s nothing in the situation to be jealous of. Whatever it is that you’re jealous of, like they say, be careful, you may get it. Because when you get it there are all sorts of problems that come with it.

The best thing is if you really get in touch with your own pain when you’re jealous, and then drop it. Then your mind can rest at ease. Then on top of that, to really affirm that you’ve been able to drop it, then rejoice that the other person has that ability, or talent, or virtue, or whatever it is. Isn’t that nice that that person has it? Why do I always have to be the one that gets everything good? Because actually, when I look at it, I have a lot of good opportunities right now. And there are probably a lot of people who are jealous of the opportunities I have now. But I don’t appreciate my own opportunities, I always look on the other side of the fence, where the grass is greener, and the situation is better, and the chanting is better. But actually, would it really make us happy? That’s the question.

Sometimes I find it very helpful to think of getting this thing, this situation that I’m craving, that I’m really jealous about, and then playing it out in my mind. What’s really going to happen if I have that ability or opportunity. Then what else is going to come along with it? And am I going to be able to handle what comes along with it? And will I be really happy? And then turn it around and rejoice at the other person’s opportunity.

Yesterday when I was speaking to the group of teenagers, it came out that I had been married. At that point all the hands went up. Because I told them that my mother introduced my ex-husband to somebody else whom he then married. So one of the teenage girls said, “Are you jealous of his new wife?” And I said, “No, I’m very glad she’s married to him and not me.” And they were really rather shocked about that. But I said it sincerely. I’m very happy for them. And I wouldn’t trade places for the world. Because I like my life being a nun. I’m not jealous of her at all. It was really kind of interesting. It was a question that nobody’s ever asked me before, and I had never thought of it before. Because why in the world would I be jealous of her when I have a wonderful life?

Think about it. Tell it to all the people you know who are jealous, because you aren’t. Just keep it in the back of your mind, maybe.

Audience: When we are accepting of, and when we have fulfilled our personal aspirations, then there is no need to look around and compare. So my process of practice is to learn to see my abilities, to see what I have, and as you mentioned too, and I recognize that indeed with that comes some satisfaction, I’m less driven by looking around and seeing what others have. I know as a teenager it was terrible, and I was not able to look within and see what I have already. I’m confident with more practice that will be even more stable.

Venerable Thubten Chodron (VTC): Yes. And I think what you said about when we work towards fulfilling our own aspirations, then there’s a sense of satisfaction inside, and contentment, and jealousy just doesn’t arise then.

Audience: For me when I have jealousy, also there’s a lot of arrogance. It’s the arrogance that binds me and keeps me in the jealousy. So I have to dismantle the arrogance a bit before I can move things. That always seems to go hand in hand.

VTC: Yes, because arrogance, jealousy, and competition are the three things that keep us comparing ourselves to others. With jealousy they’re better than we are. With arrogance we’re better than they are. With competition we’re equal and we’re trying to get better. Those three, like you said, they come together. It’s all based on the mind that’s comparing myself to others.

Especially the arrogance of “they have it and actually I’m better and I should have it.”

Audience: My comment kind of ties into that in terms of I see when I have to look at my expectations and how that’s fueling the jealousy. Because if I think I should be here, and I’m not, then the competition comes. Then the arrogance comes. And then the jealousy comes. When I’m reflecting on situations, I’m in the thick of jealousy, my expectation of where I should be or what I should have is being thoroughly challenged and I’m not very happy about it.

VTC: Yes. So it starts with unrealistic expectations of yourself, doesn’t it?

Audience: Yes. The image of what should be. One thing that particularly comes to mind is when I first got here and I took my anagarika on the same day as Ven Nyima was being ordained. Oooh, I was so jealous…. It was so misery making. Because I wanted to be newly ordained, and I wasn’t. And in the lead up I was, this is not the mind that I’m going to do this with. I cannot allow myself to enter this training period, enter my life in the community, with that nasty, horrible, painful mind. And so I really had to turn it. It was my expectation of where I should be or what I should have, and then that being not what was reality.

VTC: And being discontent.

Audience: Incredibly. Not seeing how much I had in that moment, that I was completely oblivious to, because I didn’t have what I wanted. 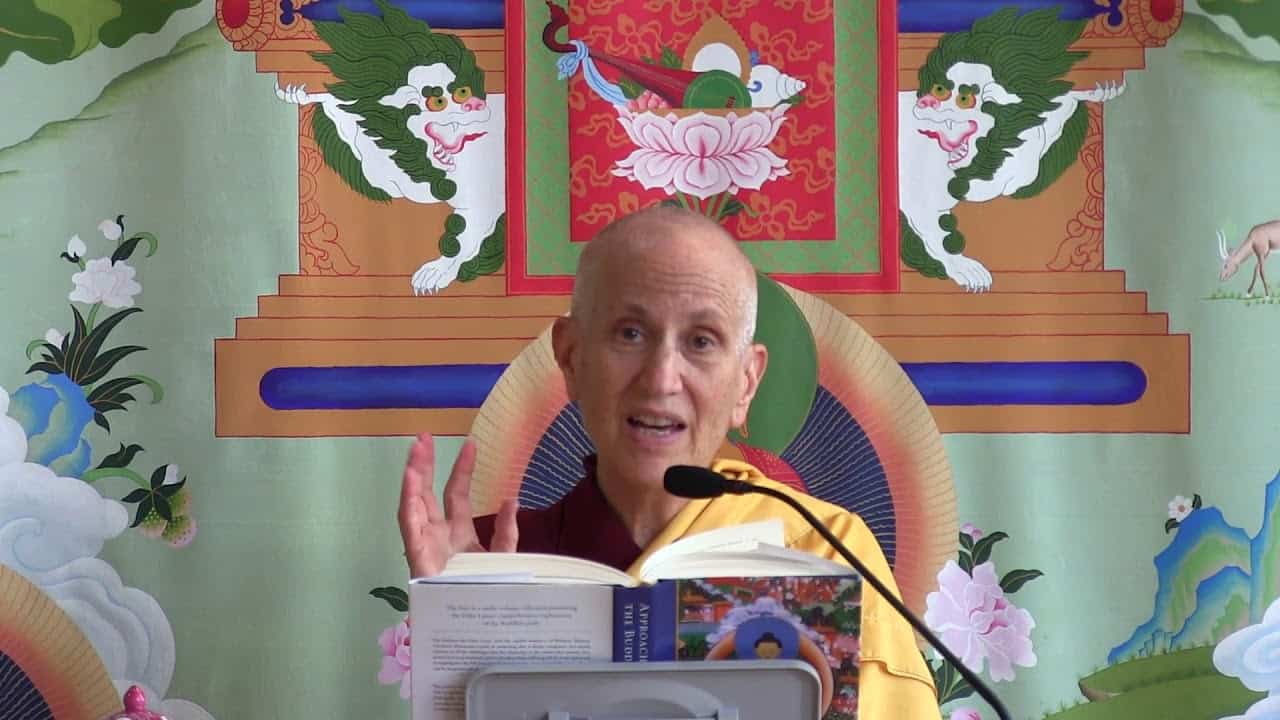 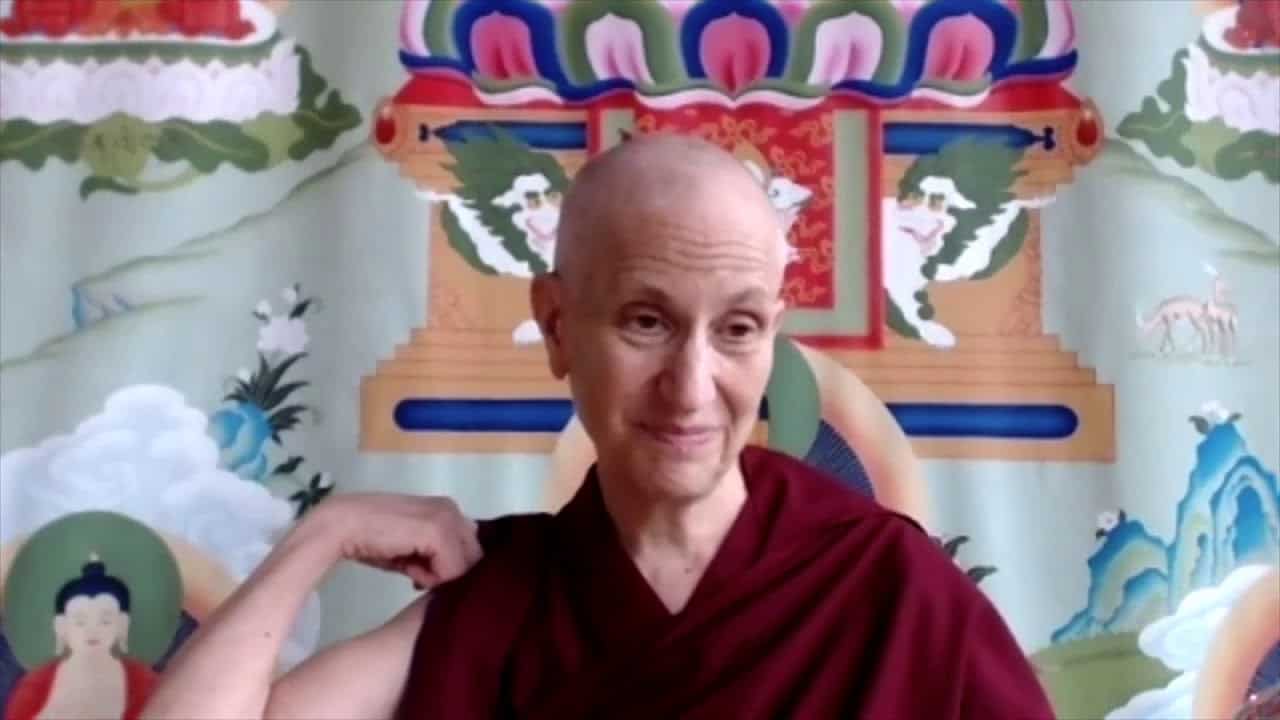 One Teacher Many Traditions with Institut Vajra Yogini