Practicing with those who harm us

Practicing with those who harm us

Before I tell that story, I want to tell another thing. Today I was reading an email we received from somebody who lives in Burma, who, like us, has been very deeply disturbed about the Rohingya situation. In his email he was really lamenting the prejudice that the Buddhist Burmese have for the Muslims, and saying that until that is remedied nothing else is really going to be solved. Then he said that looking at that situation, sometimes he gets really angry and furious at the Burmese government and the people in it. Maybe I’m dramatizing this a bit more. But he would like to shake them and say, “Aren’t you guys supposed to be a bunch of calm, compassionate Buddhist meditators? And look what you’re doing.” And then he was saying how listening to the BBCorners here helps him a lot.

My little expression of, “Not all Buddhists are buddhas,” just like not all Christians are Christ, not all Muslims are Mohammed. Or whatever, however you want to phrase it. It’s just again this call to not expect sentient beings to be perfect. People being religious practitioners doesn’t make them perfect. That’s why in our food offering prayer there’s the phrase, “Although we are not perfect, we will do our best to be worthy of your offering.” That’s the thing. Although we are not perfect, we have to do our best to be worthy. But don’t think that we’re perfect.

I put that phrase in there because one of our supporters had mentioned to me that although she had been at the Abbey a lot and knew we were people, some other people thought that we were kind of elevated on the cloud level close to god somewhere, and I felt that it was very important to kind of lower that.

The same thing with the monastics in Burma. Certainly we don’t approve of what they’re doing, but we also don’t expect them to be perfect practitioners and to keep all of the Buddha’s instructions in their minds. It would be wonderful if they did, we encourage them to do so, but encourage and expect are two different things.

To protect our own mind it’s wiser to encourage people rather than to expect certain things of them. Because, as we all know, expectations usually aren’t met. Because the other person didn’t agree to them. You may say, “Well, these Burmese meditators, they ordained, isn’t that part of the deal?” Well, trying is part of the deal. Being realized beings quickly is not part of the deal. But we definitely have to do our best to keep our part, and to at least try.

Now, coming back to my story I promised to tell you.

When my teacher sent me to be the spiritual program coordinator in the Italian Dharma center, there were just a few monks there, and there was another nun who was supposed to come to be the gegu for the sangha, the disciplinarian, but then she wound up not being able to come, so then Lama gave me both jobs.

There were two monks there when I first came, then a few others came, and some of them had been ordained before me, and the ones who had been ordained later than me became bhikshus while I was there. Anyway, you combine that with macho Italian men, and they had a certain way of being. You put that together with an American woman whose fairly independent, and it doesn’t really work so well.

I had such a horrible time there. Because I had two jobs, and both jobs were positions of authority and responsibility, and when you have authority and responsibility, then people, of course, don’t like you, for whatever reason. During committee meetings they would often make fun of me, they would pick on me. I remember one time I was organizing a printout for a retreat and the director came in and took it off of my desk when I wasn’t there, because he didn’t trust me doing it. Then some other time, the Dharma center was still under construction, and so the guys on the construction crew, the director (the second director, he was a monk), he wanted them to work harder and do more, even though they were already working really hard, and I had arranged to do a practice which is an all night puja to Tara—it’s a really beautiful practice. So I wanted the guys on the construction crew not to have to work so hard all day so they could do the practice that night, and the director totally blew up and said, “I am going to write to Lama Yeshe and tell him you are the biggest interference this Dharma center has ever had.”

There were things like that going on. And a couple of these monks were people renowned through the organization for being difficult to work with. But the thing is, I always saw myself as the victim of what they were doing, and I would get really angry, go to my room every night, read Chapter 6 of Shantideva, try and calm down, go back the next morning, and have to face this all over again, get angry again, go back to my room again, meditate on Chapter 6, get calm…. This repeated over and over again.

Finally at one point I wrote to Lama Yeshe, and I said, “Lama, they’re making me create negative karma, which is going to send me to the lower realms. Can I leave?”

So you see, all my problem was their fault. Why am I so angry? Them.

Lama writes back, and he says, “We’ll discuss it, dear. I’ll be there in six months.” And I wondered how I was going to endure for another six months.

But somehow I did. Then when Lama came, I received permission to leave. I wound up going back to Kopan, and one day visited Zopa Rinpoche, and we were sitting on the top of the old Kopan temple, which doesn’t exist anymore, having tea, and the sunlight, and it’s looking out over the peaceful Nepali valley, which is now crowded with buildings, but wasn’t at that time, and Rinpoche says to me, “Who’s kinder to you, Buddha or (we’ll call him) Sam?” And I thought it was a very strange question, because certainly Rinpoche must have heard about what happened. And certainly the Buddha is kinder to me than Sam, because the Buddha taught the Dharma. I mean, I owe everything to the Buddha. Sam, meanwhile….

This was, of course, not what I wanted to hear. I wanted sympathy. I wanted Rinpoche to say, “Yes, I know, Sam is difficult.” And then the other guy, Joe. Joe was another story. (That’s not his real name.) Joe had a reputation for being a problem. I wanted some sympathy: “Yes, these people are difficult. And you were brave, and you were kind, and you endured all their abuse, all their ridicule, all their insults. Thank you so much you worked so hard to benefit sentient beings at that center, even though they didn’t reciprocate it, all through your kindness.”

That’s what I wanted to hear. But that’s not what Rinpoche said. He told me that they were kinder than the Buddha.

I had to go away and really chew on that for a while. Rinpoche has a way of doing this with people. Some people can’t handle it. They really can’t handle it when he talks like that. But it was like, well, he’s my teacher, I’d better think about what he said to me. He wasn’t just saying it to be mean or something.

Just as somebody who wants to perfect generosity needs beggars and people who come and ask for things, then people who want to perfect fortitude need people who are unkind, who abuse them, who ridicule them, who insult them, who make things difficult for them. And those people, we should regard them as rare and dear, like a precious treasure. Because not everybody treats us like that. So we can’t practice fortitude with everybody. The people who treat us poorly are actually few and far between, when we think about it, compared to the amount of kindness others have shown us. We really need those people who are difficult. And they aren’t always so easy to find.

So that verse makes a lot of sense.

Even if you don’t want to, try it. All the techniques we learned in terms of this is a ripening of my karma, to this person himself is suffering. All these different techniques we have for dealing with anger. Practice them. And even though at first they seem rote, “Yeah it’s a result of my own negative karma, yeah because I was self-centered, so yeah, this person is treating me so awful. But how dare they, they can’t treat me like this.” Just try and contemplate that remedy. Not just reciting the words, but really try to see if you can nudge your mind in the direction of seeing the situation from that perspective. The more you can nudge your mind to try a different perspective, then the more that perspective will make sense to you, and the better you will feel, and the less power that person or that situation will have over you years later

This is our practice to do. Nobody can do it for us. We have to do it. But if we do it, it really helps, and it works.

So, may we work for the benefit of all these precious treasures who are so rare and difficult to find, but on whom we depend to attain full awakening. 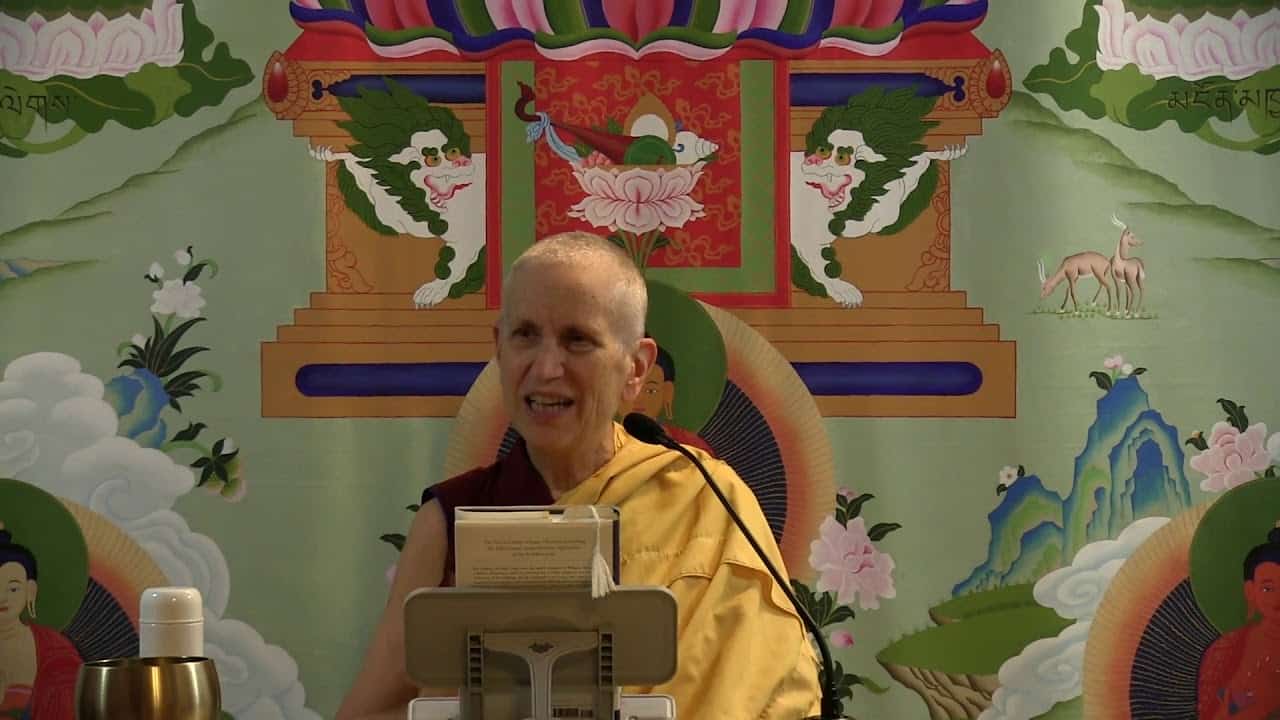 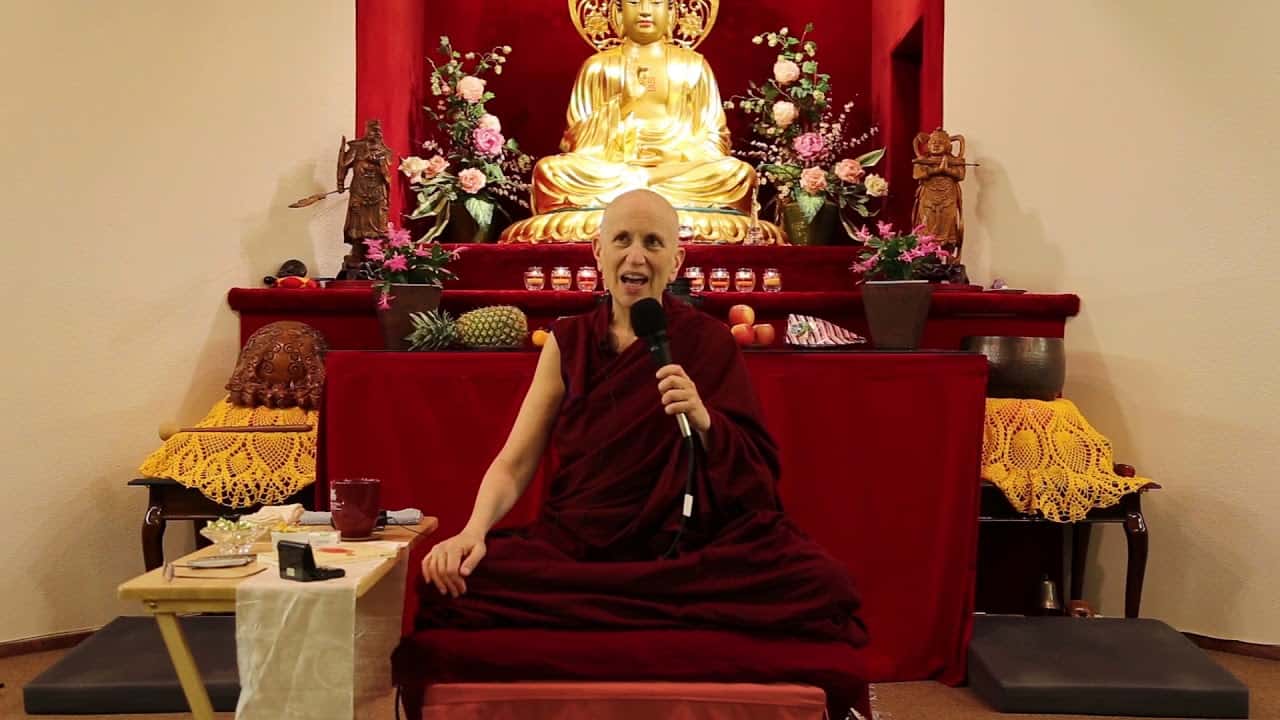