“What is to be most closely guarded when one is in a crowd?” And the answer is not your wallet. [laughter] “The actions of your body and speech, both of which are determined by the mind.”

What is to be most closely guarded when one is in a crowd?
The actions of your body and speech, both of which are determined by the mind.

The idea is when we’re alone we spend our time in meditation and observing our mind, and the state of our mind. And then when we go out and we’re with other people we still need to observe our mind, but we especially pay more attention then to our body and speech. Because when we’re with other people those are our avenues of communication. Of course, what we say and what we do all come from the mind, which is why we have to still keep an eye on our mind, and really explore the mind when we’re alone.

It’s interesting to actually look and see if we do this, because sometimes what we’re doing is, when we’re alone, are we looking at our own mind? No. We’re thinking about the body and speech of other people. Aren’t we? “So and so said this, so and so did that….” You know? And so here the instructions are, when we’re alone, to look at our own mind: “What am I thinking? What am I feeling? How am I conceptualizing the situation? How does the situation appear to me? Does it exist the way it appears? Am I adding some kind of inherent existence to things?” Or even, “Am I adding all my projections on other people’s actions and their words? Am I pretending to be a mind reader because I know everybody’s motivations for doing exactly what they do.”

We should be looking at what’s going on in our mind and questioning our own mind and how we’re perceiving, how we’re thinking about things, when we’re alone. Not thinking about what other people said and did. Okay? Because that doesn’t go anywhere, does it? “They said this, they said that.” “I like this, I don’t like that.” And on and on and on.

If we’re able to stay centered when we’re alone, then when we go out with other people there’s a much better chance that we’ll remain—at least a little bit—centered, and that our body and speech will be more geared towards kindness, and we’ll be able to refrain from negativities. Like when our mouth is about ready to open to say that really nasty comment. [Hand over mouth.] You know? We’ll be able to keep it closed. Or when we’re about to talk badly behind somebody else’s back, because we just spent the last two hours alone thinking about what they did and how they don’t like me and they’re so mean, then when the first person we see, of course we want to tell them awful that other person is so that they’ll be on my side and against that person…. If we’ve really spent the time alone looking at our own mind and pacifying our own mind, then when we’re out with people there won’t be so much of this impetus to speak badly about other people behind their backs. Or to criticize and complain about what other people are saying or doing.

And even if we haven’t totally pacified our mind when we’re alone, to really keep an eye on our body and speech when we’re with other people because, like I keep saying, our mouth can be a big weapon of mass destruction. And when you look, so often we are so unaware of the effect of our words and our actions on other people. We just totally, we’re so involved in ourselves, and, “I’ve got to say this, I’ve got to do this….” Without thinking what effect is it going to have on the people around me.

We need to have that kind of awareness, and then that will enable us to refrain when we need to refrain, and to instead convert it into speech that encourages other people, speech that’s kind. And the same with physical action, to stop the ones where we want to slap somebody or throw something, or whatever, and be able to refrain from that and thus create a more peaceful environment around us and prevent ourselves from creating so much negative karma.

And then when we do we can really use our body, speech, and mind in a really beautiful way, to create harmony and to encourage other people. When we see people doing something well to point it out, to encourage them.

They tell the story of the Kadampa geshe who had two different color stones and every time he would have a negative action he would one color stone in this pile, and whenever he had a positive action put the other colored stone in the pile. For us to do that…. Try that with your speech. After you talk, like okay, which pile do I put what my comment’s in. Do they go in the pile of encouraging people and creating harmony? Or in the pile of picking on people and creating disharmony? And to really do this over time, and to watch our speech that much. And in that way it opens a window to our mind. Because boy, if I’m bad-mouthing a lot of people, that’s telling me about what I’m thinking about when I’m not with people. And then when we look when we’re not with people and we’re sitting there with all of our nasty thoughts: “Oh, that’s why I’m so unhappy! Because I’m sitting here just letting my mind think nasty thoughts about other people.” And when the mind says, “But those nasty thoughts are right because they did this and they did this and they did this!” Then you look at them and you say, “So what? How do you know they did those things? How do you know they meant those things? And even if they did–so what? Do you want to be miserable?” You have a little discussion with yourself. (I have these kinds of discussions with myself.) Like, “Chodron, you know, this way of thinking is making you miserable. Do you want to be miserable? Or do you want to be happy?” Yes? 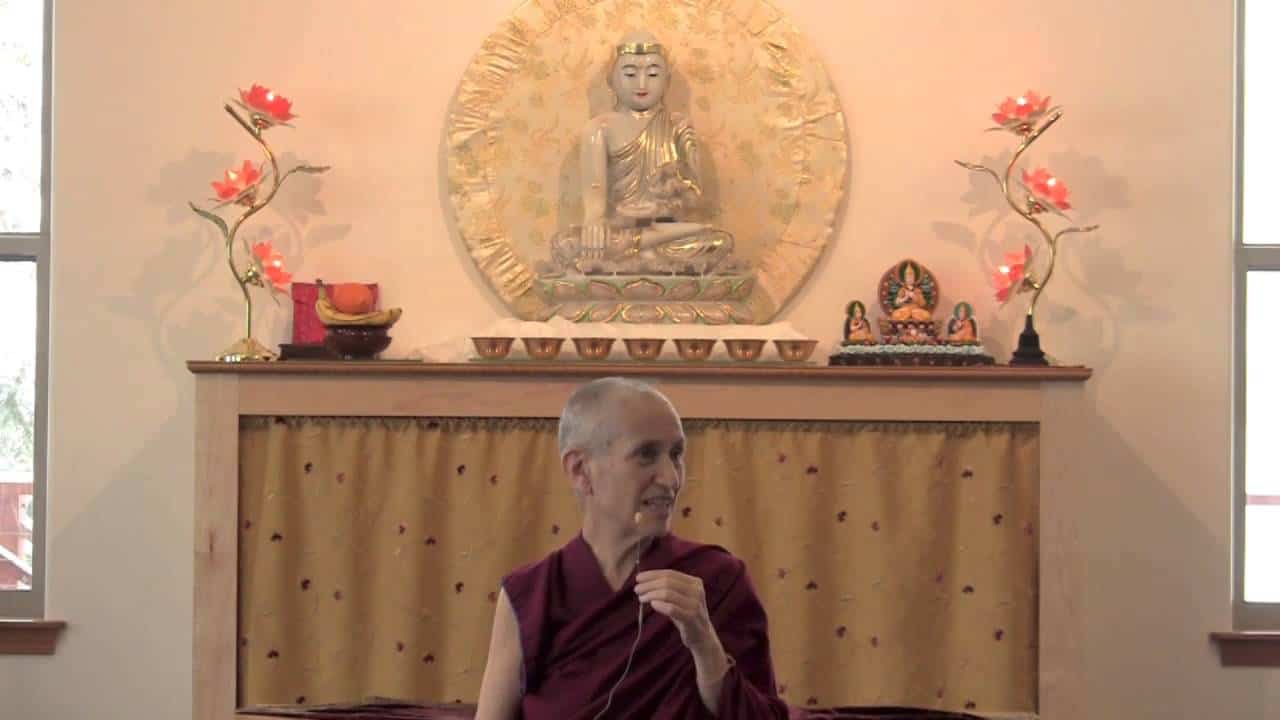 Verse 90: The auspicious omen of love 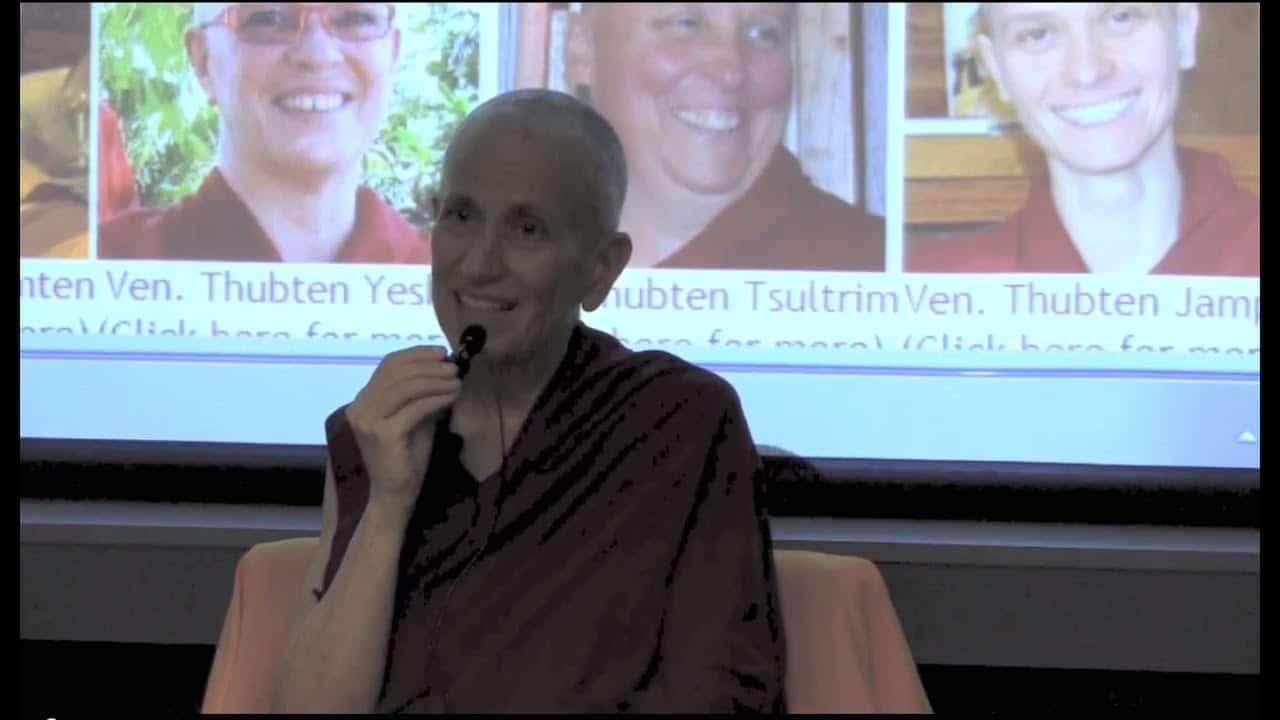