We’re on Verse 32, “Who is the master executioner slaughtering all sentient beings?”

“The terrifying Lord of Death who has power over the entire world.”

Who is the master executioner slaughtering all sentient beings?
The terrifying Lord of Death who has power over the entire world.

In Buddhism we use the expression “the lord of death.” It doesn’t refer to a real being. This is anthropomorphizing a natural occurrence that, indeed, is terrifying to almost everybody because at the time of death we separate from everything that we know. Our friends and relatives, we’re no longer with them. Our possessions, we can’t hang onto. We even have to give up our body, which is the most cherished thing. And then our whole ego identity. Because our whole ego identity is gained in relationship to the environment and all the other people in it. So we have all these ideas: “I am like this, I am like this. People treat me this way, they should treat me that way….” All of that disappears. Everything we’re familiar with disappears.

For people who are attached to things, this is terrifying. And for those of us who grasp at being a real person, as this image of this real person (who) we think we are dissolves then it’s very frightening.

Why does the Buddha ask us to reflect on this? Why is this in the text? It’s not to frighten us so that we get full of panic the way ordinary people do. But it’s to get us to realize that death is something certain, we have no idea when it’s going to happen, and at the time of death we can’t take anything with us. So we need to prepare ourselves now. Because the only thing that does come with us is our karma and the mental habits that we’ve developed. All the actions that we’ve done, the imprints of the actions, they come with us. But the people, the possessions, our body, our reputation, everything in regards to which we created all these actions—they stay here.

We may have stolen something in order to get something for our family. The family stays here. Whatever we stole stays here. The karma of stealing, the imprint from that karma, goes with us into the next life.

We can look at any action like this. Because most of us, when we make decisions, when we have intentions before we act, we’re only thinking of what is immediately beneficial. “I want this. I’ll take it.” Or, “I’m hungry, I’ll take it.” Without thinking what are the long term repercussions of my action even beyond this lifetime, into future lifetimes. So we don’t consider that. So we don’t think about the karmic imprint of the action. We don’t recognize that whatever person or thing that we were trying to protect or get or defend, that we separate from [it] and it can’t come with us. We forget all of that and just focus on now. What I can get now. And that view leads us to a lot of uncontrolled behavior.

I said last week, don’t be spontaneous when it comes to non-virtuous intentions. This is exactly it. Because we’re very spontaneous regarding procuring and protecting what we want. But it doesn’t pay off in the long run.

Similarly, we hesitate very often to do virtuous actions because it’s a little bit inconvenient, it takes some effort. You know? “Oh, I’m making an offering, then I can’t use that money for myself….” You know? “Oh I respect somebody, but then I can’t toot my own horn so other people won’t think I’m so great….” So we’re reluctant to do virtuous actions, again thinking only of the immediate benefit or harm, instead of the long-term.

When we meditate on death, when we contemplate death, it helps us really reassess our priorities in life. And what is important. Is “getting what makes me happy now” really important in the long run? Considering that I’m going to die and all that stuff that I’m trying to get is not going to come with me. Is being right really that important? When I die, all the people in front of whom “I’m right” don’t come with me. Is winning the game or winning the argument important? Again, in the long term, none of that comes with me. Is having every comfort that I want really that important? Again, none of that comes with us. Except the karma, the imprints of the karma.

The reflection on death really makes us stop and say well, what really is the meaning of my life? And how am I going to spend my time? And what do I want to have to show for it at the end of my life? Do I want possessions, a family, a great reputation, having had a good career, lots of possessions, some status…. Do I want that at the end of my life? Or do I want the seeds of positive actions? What is going to be more valuable to me at the end of my life? A scrapbook full of pictures? Or now they have the little things on tablets, one picture after another of your whole life. So you have this whole thing with all your pictures on it and you can look at it…. “Oh I remember this, I remember that. That was so wonderful. Oh this person was so good. That was….” You know? Do you want to have that at the end of your life? To just look back and see all the things that you were or did? You might think so. But really, what use is all of that? All of that stuff is gone in this life. It’s not even there at the end of our life. And then when we think about what we did in those relationships and to get those things that are now no longer here, then the burden of our destructive actions really weighs heavily.

And at the time of death there’s no time to do purification practice. There’s no time to forgive or apologize or let go of things. It’s like (snaps fingers) gotta go. You can’t say, “Lord of Death, excuse me, I’m not ready yet.” You know? “Can you delay my death a little while? I need to do some Dharma practice” No. That doesn’t work.

Since we don’t know when death is going to come, and it really is the “great executioner,” then it really behooves us to keep our lives in order and to avoid harmful actions, to purify the ones that we’ve created, to learn the techniques to calm our mind and release the afflictions. Because that’s what is going to be really beneficial to us at the end of the day.

And that is work that nobody else can see. So we’re not going to get a good reputation out of practicing the Dharma. You might get a good reputation out of going up different levels and presenting yourself as somebody in the Dharma scene. But that has nothing to do with being a good practitioner. Because being a good practitioner is what’s going on inside. Nobody else knows it.

If we’re trying to pull the wool over someone’s eyes, it doesn’t help us. Being a hypocrite in the Dharma does not help at all. Because karma is what rules the situation. What’s going on in our mind is the real cause of what we experience. So it doesn’t matter if everybody loves us, or if everybody hates us, if they approve, if they disapprove…. All that stuff is totally inconsequential.

We need to really get down to transforming what’s inside. And to really setting our priorities correctly so that we make use of our time wisely.

[In response to audience] The Buddha did set up some of our precepts because monastics did things that the laity found objectionable. So does the opinion of the faithful laity matter? It depends on if the faithful laity have wise opinions or not. Faith doesn’t necessarily indicate wisdom. So it really boils down to the wise.

Because I’ve had people who are long-time Dharma practitioners…. It’s so amazing. I remember there was one woman, she criticized me for not propounding women’s equality. And there was a man who criticized me for being against men because I said on a retreat that he couldn’t sit on a sofa next to his girlfriend. [laughter] And I mean these are people who are long-time practitioners. And yet one person told me, “Oh you’re too strict with how you keep your precepts.” And another one told me, “You’re too lax on how you keep your precepts….” Okay?

If my teacher told me something, then I’d really listen. But the other thing is, you know, who am I going to follow? I mean I really had to laugh when I got some of these accusations. 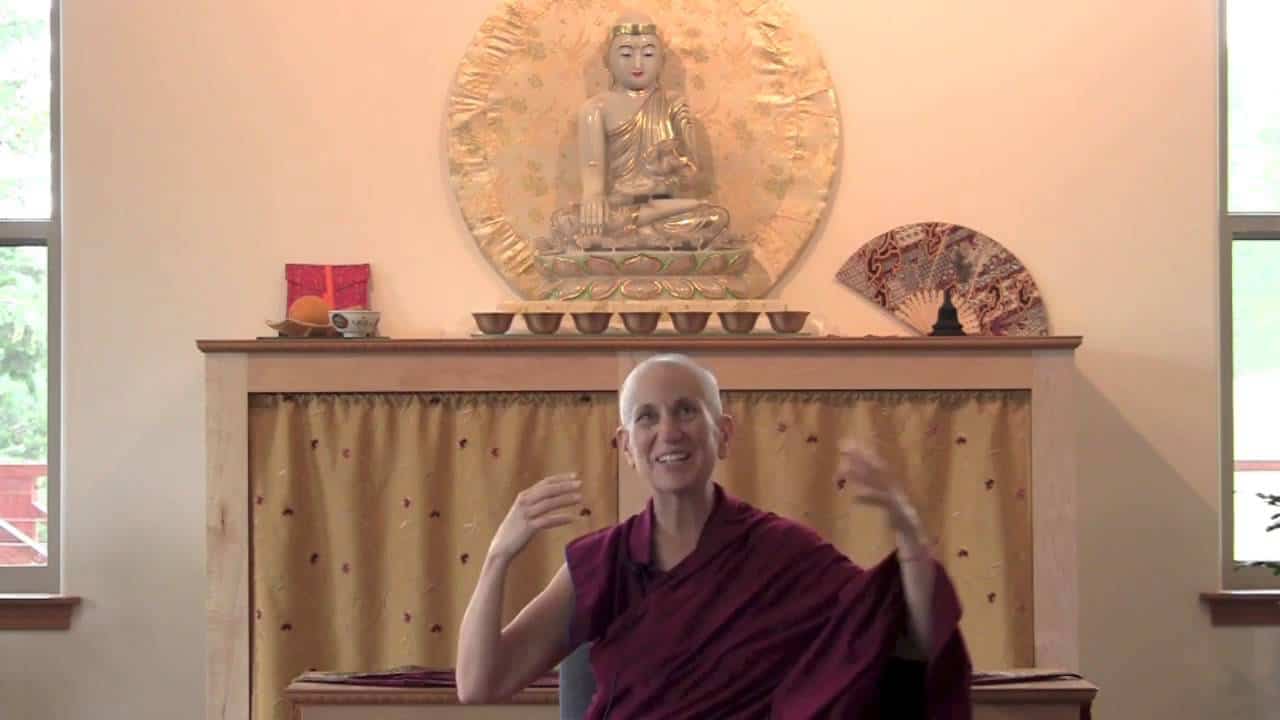 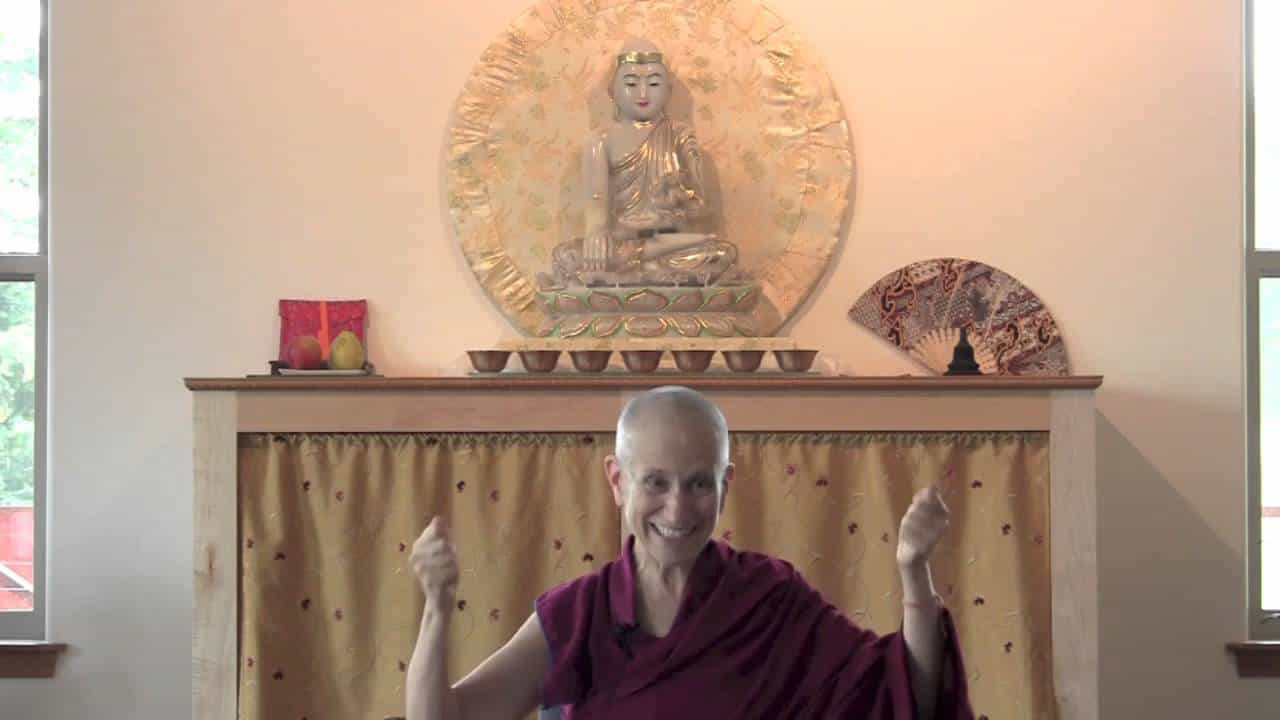