Let’s continue on. We stopped at the point where Tara is above our head and all these wonderful things have absorbed back into her heart. We left it in suspense to what happens next. So all that goodness doesn’t just stay in Tara’s heart; it starts coming down into us. Like I was saying last time, we don’t think of our body as so solid, but really let the light and nectar come into every part of our body. It can also wash over us too. At that time you think it fills your entire body and it dispels all the negative karma.

We’ve talked about negative karma, all the deeds that we have done in the past that we regret. You can imagine these as really yucky stuff: as feces, or as scorpions, or snakes, or whatever you want. You don’t think of those creatures as being inside of your body. Rather, when you think of the negative karma coming out, it can come out in that form. For all of these things, we’re going to go through them one by one, you’re going to have that visualization of these creatures, or feces, or just pollution and smoke, or whatever you think is disgusting. These things manifest as they come out of you. You feel like you’re really light, and relieved, and those things don’t exist any more.

You can also do this visualization thinking that your afflictions are coming out that way. If you have a lot of anger or resentment, if you’re holding onto a grudge, if you’re jealous, if you have a lot of greed or whatever—you can think of all of that coming out too. All of that’s getting purified so that your mind doesn’t get tangled up in it. So basically anything we don’t like about ourselves.

Your negative karma, your disturbing attitudes (those are the disturbing emotions), there can also be wrong views. If you’re holding onto a lot of wrong views, maybe thinking that, “Well, maybe there’s God that created us who’s going to save me.” Or maybe, doubt about karma, doubt about any other kinds of things, or wrong views about those things that you find are still stuck in different corners of your mind. Maybe not in the corners, maybe right in front of you! Then you can imagine those getting washed away, too.

Disturbing attitudes, negative emotions, disease—if you have any kind of disease or injury; that’s being washed away. All of our physical problems come due to negative karmas that we have created that have ripened. When we purify the karma, we’re purifying it before it ripens. We’re actually purifying the karmic imprints before they ripen.

When we think of purifying the disease or the injuries, then we think it’s already ripened but we’re trying to heal it. If something in your body isn’t working so well, or if there’s pain, or illness, or whatever, then you imagine this is all getting healed as the light and nectar come into you.

Then there are also the dangers of untimely death. So untimely death is when a very strong negative karma created in the past ripens when you least expect it in this life. For example, you might have the karma for a long life span but then also there’s another karma that can ripen in having a fatal traffic accident. For example, what just happened in Tucson. I think of the people that lost their lives there. That’s an example of untimely death because probably most of them had the karma to live longer, but some very strong negative karma ripened at that moment that caused them to die. It could be death also by a sudden illness, when a child gets cancer or something like that or again an accident, an injury, something.

All of these leave your body in the form of dirty liquid, or whatever else you think is yucky. Your body becomes very pure and clear. That’s very important, to think that your body is pure and clear. That’s what I was referring to last time. You don’t think of your body and, “Oh, there’s my stomach with all this half-digested food in my intestines,” and all these ugly things. You just think of your body as being filled with light and as very pure and as very clear. You’re not holding tension in your body, you’re not holding disease, and you’re not holding stress or anything else. This is all being let go. Your body becomes pure and clear, very bright. Your mind also becomes clear and blissful. Think your mind is very serene. You’re not anxious, you’re not worried, you’re not fearful, you’re not dreaming up stories of people not liking you, and getting paranoid over silly things. Your mind is just very relaxed and open and at peace. No civil war in the mind.

When I was leading the sadhana at the beginning of the retreat I may have mentioned that when this stuff comes out of you as dirty substance, if you want to, you can imagine the lord of death. Again, this is working with symbols. There’s not a real lord of death as some kind of monster who lives beneath the earth. As you’re purifying, he opens his mouth and all your negative karma and filthy things (the illness and the negative emotions and all that) comes pouring into his mouth. But for him, he thinks that is just yummy and delicious. You think that you’re satisfying the lord of death; and so at the end of the practice he’s completely satisfied. His mouth is closed with a double vajra so he can’t burp, he can’t vomit this stuff. He’s just so blissful and he goes back under the earth and is completely satisfied and stays there.

That’s the whole idea when we do the gektor, when we invoke spirits and send them away. [This is a short portion of some rituals in Tibetan Buddhism.] Actually the spirits can be representing our own negative states of mind. Instead of beating ourselves up for the negative states of mind, we imagine making an offering to the spirits. They’re satisfied, they’re at peace, and they go away. This lord of death visualization is that same kind of idea. 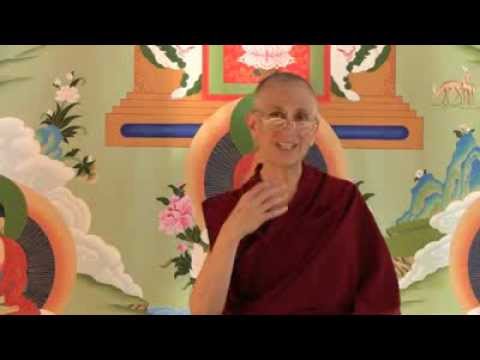 Light and nectar flowing from Tara 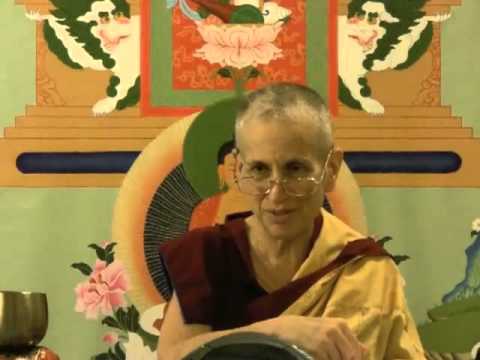 Review: Mindfulness of the body