Inspiration and long life from Tara

I wanted to continue with the description of White Tara above your head.

At Tara’s heart there’s a horizontal, white moon disk. The moon disk is flat and it’s round and it’s horizontal. It doesn’t go all the way across her body. You can make it as big or small as you want.

At the center of the moon disk is the white syllable tam. The tam is the essence of Tara’s omniscient mind, the essence of all of her realizations. The tam stands upright and if you would read it, you would be standing in front reading tam. So it’s standing upright.

Then light shines forth from the tam, going in all the ten directions, and at the end of each light ray there is a hook. The hook is not made of metal. It’s made of light so it’s not going to hurt anybody. It hooks back all the life force that has been scattered or lost. They say that we have a certain life force, a certain vitality. It’s listed, at least in the Mahayana tradition, as one of the abstract composites. It’s an impermanent phenomenon that’s neither form, nor consciousness.

When it is hooked back, it comes back—it’s been robbed, stolen, scattered by humans and non-human beings—and it’s being drawn back in the form of different containers. The containers are all filled with the nectar of longevity. One of the containers is an alms bowl that the monastics have. Another container is the cupola, the skull cup. And another container is the vase, like the different vases that they use in Tibetan rituals.

All those vessels are filled with the nectar of longevity and they are hooked back and they all dissolve into the tam at Tara’s heart. The tam is also made of light. Remember that.

Then again, the light rays radiate and they hook back the power and inspiration of all the Buddhas and bodhisattvas and those who have attained the realization of long life. In the other sadhana it calls it the power and merits of all living beings, mahasiddhis, scholars, universal monarchs, Buddhas, bodhisattvas, anybody who has this siddhi and even the virtues and merit of people who don’t. It comes back in the form of the eight auspicious signs. These eight are offered when you do a long life puja for your teachers. You offer these eight, so they’re ancient Indian symbols of auspiciousness.

You’ll often see these eight on the katas that we offer for our teachers. Also when a teacher is coming, then you draw them on the driveway where they’re coming. Liddy from France made these beautiful bookmarks with the eight auspicious signs. You see them in many different situations.

The eight auspicious signs are the fish, the vase, lotus, conch, the Dharma knot or the infinite knot, the banner, the wheel, and the parasol. Don’t ask me, “Why these eight? Why not seven or nine?” There are eight of them. “And, why these and not others?”

But you know, I think Dagyab Rinpoche wrote a book sometime ago about symbols in Tibetan Buddhism [Buddhist Symbols is the title] and I know we used to have it in our library. Somebody can see if it’s still there. He may explain these in there.

All the power and merit and the siddhi of longevity comes back, as those forms, also in the form of the eight auspicious substances which are: vermilion or sindura, a white conch, givam medicine (givam is a certain fruit), durva grass (I think it’s the kind that has a lot of knots in it), bilva fruit, yogurt, a mirror, and white mustard seed. It also comes back in the form of the seven signs or seven emblems of a universal monarch which are: the Dharma wheel, the wish-granting jewel, the queen, the minister, the elephant, horse, and the general. And it also comes back in as light and nectar.

All the siddhi of longevity, the merits and wisdom, and everything of all these beings, and virtue is hooked back and then it dissolves into the tam at Tara’s heart.

Essence of the elements

Then light radiates again and it hooks back the essence of the four elements of earth, fire, water, and air, as well as the space element. It’s basically the essence of the five elements. As the light goes out and hooks it back, Khensur Wangdak Rinpoche was saying in the initiation, that it comes back in the form of light and nectar.

The earth element is yellow light and nectar. And then the water is white light and nectar. The fire is red. The wind is green, and space element is blue. So those come back and join it. The thing is when we’re sick, it’s because these five elements are out of whack in our body. Here we’re calling them all back into Tara and then they’re going to come into us and we think that it rebalances the five elements in our own body.

Then also in the initiation, Khensur Rinpoche talked about invoking the blessings of the body, speech, and mind of the Gurus, the Buddhas, and the bodhisattvas. These are drawn back into us in the form of the deity, White Tara, her mantra (so the mantra syllables), her implements (so the lotuses), the seed syllable tam, and then also om ah hung. This one in particular, when it comes into our body, restores degenerated vows and commitments.

All these things have now been drawn back, been hooked back from all over the universe and hooked back into the tam.

This all draws back into them—in Tara’s heart above your head. 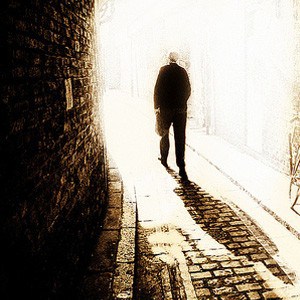 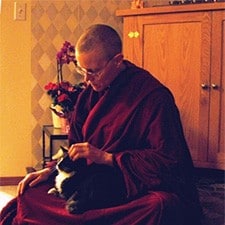