Let’s continue now with the White Tara sadhana. We’ve finished refuge and bodhicitta, finally after a month. Hurray! That’s really very important because if we lack those then what follows isn’t going to have a lot of meaning. So having taken refuge and generated bodhicitta, now we start the actual practice.

The sadhana then says, “Above the crown of your head the transcendental wisdom of all the Buddhas manifests as White Tara.”

“Above the crown of your head…” The crown—so above your head. Don’t worry about whether it’s touching your head, or an inch above, or four inches. It doesn’t matter. The transcendental wisdom of all the Buddhas appears as Tara. In other words, Tara is not some person. It’s not Saint Tara, or God Tara, or something like this; but Tara is a symbolic representation, a symbolic manifestation of the transcendental wisdom that is shared by all of the Buddhas equally. Anybody who is a Buddha has developed this kind of wisdom in their mindstream, as well as the compassion and so forth. Tara is one manifestation of that wisdom. She’s on top of your head, facing the same direction as you are.

“She has all the signs and marks of a Buddha.” This comes from ancient Indian culture. It was adapted from ancient India that there are certain great people, bhagavans, who are spiritually realized. They all have 32 major signs—like the crown protrusion on their head, the curl here, the way their teeth are arranged, the long earlobes, different things like that. They have 32 marks and 80 signs. They get these by accumulating certain types of merit.

This is explained in the Abhisamayalamkara, in The Ornament of Clear Realizations. It explains what kind of karma you do to get these certain physical marks. Tara has all of these signs and marks. She also has seven eyes: one in her forehead, and then the palms of her hands, and her regular eyes, and then on the soles of her feet. She’s looking out at the world with compassion.

We usually look out at the world with distraction. But she’s not doing that. She’s looking out at the world with compassion. She’s looking at you and at all the sentient beings around you with complete acceptance and compassion. This is a very important point. Tara’s not sitting there with a scowling face saying, “Yesterday, you did your Tara practice so lousy. I didn’t want to come today. Your visualization of me was so crummy yesterday.” Tara’s just not into that. That’s not what’s going on. [Laughter]

This is something that’s important because we so much have the tendency to judge ourselves and criticize ourselves. So much so that we think Tara and the rest of the universe has the same judgment and criticism. That’s not the case at all. So, imagine Tara looking at you with a lot of kindness. “Hey, well, you did your practice yesterday. That’s good.” And even if you didn’t, Tara says, “Okay, you didn’t do it yesterday but try today.” So you’re always meeting with something encouraging instead of the projection of your own judgmental mind.

She’s looking at you like that. She’s also looking at all the other sentient beings like that. So the person whom you can’t stand—Tara’s looking at that person with compassion. Now, don’t start criticizing Tara because of that, saying, “Look Tara, if we’re going to have a relationship, you have to be on my side, and I can’t stand this guy.” The way you have a relationship with Tara is very different than ordinary relationships. You don’t demand that Tara is being on your side. Tara is leading you to enlightenment so it’s our idea to try and follow Tara, for example.

Okay, so start with that as the visualization. 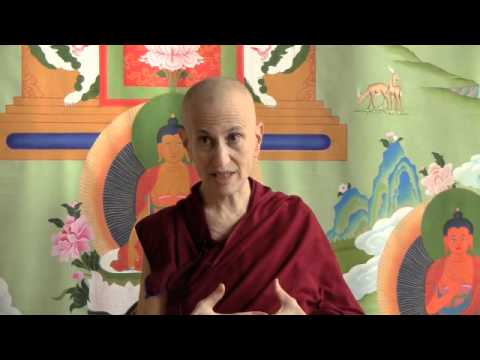 The benefits of change 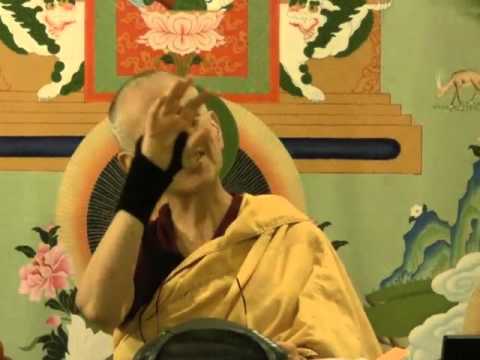 Three ways to meditate on the mind