I thought I’d just start on the sixteen attributes of the four truths, because they clarify a lot of misconceptions that we may have about the four truths. It’s very important to clarify our misconceptions, because if we have the wrong ideas then even if we meditate we can’t go forward in our practice. If we don’t have the right ideas we’re not meditating on the right things so we’re not going to get the right realizations. So we have to start with a basic correct idea first.

In the Theravada tradition, they often consolidate these into what they call the three characteristics: impermanent, dukkha, and then not self. In the Sanskrit tradition, it’s the same term but we translate it as selflessness, but it’s the same thing. Theravada say “non-self” or “no self” or “not self.” I personally think “not self” is more accurate from the Theravada view. And “selfless,” people get it confused with being very compassionate. So you just have to learn the right terminology to understand what’s going on.

In any case, of these four attributes of the first truth, the first one there is impermanent. Each of the attributes has a syllogism that accompanies it that explains this topic. It also specifies, it also uses an example of what it’s talking about to really drive the point home. Instead of saying “all true dukkha is impermanent,” it uses the example of the five (psychophysical) aggregates. It says,

The five aggregates are impermanent because they momentarily arise and cease.

We’ve heard this many, many times, and we might have an intellectual understanding, we might not. But the thing is, do we really get it? To realize impermanence isn’t just to realize coarse impermanence: the fact that buildings fall down, people die, retreats end, retreats begin, and things like that. It means also to really see that things are changing moment by moment. Because you can’t have the coarse endings of certain things without having the subtle change that happens in each moment. So it isn’t like we built Chenrezig Hall, and then it remains permanent, and then at some future time, it’s taken down. It’s not like that. The Hall, from the moment it was complete (which is actually difficult to find, which moment when it was actually complete, but anyway, from that moment) it’s been in the process of changing and decaying, never remaining the same. The idea is that because of this subtle change that occurs each moment you don’t need any other cause to make things change moment by moment. And if you wait long enough you don’t really need anything for the coarse change to happen either. Because eventually things are changing moment by moment, the coarse change is going to happen and they’re going to collapse.

This is a very, very good topic to spend some time on in your meditation, and go through your whole life and see—make examples of how you have refused to accept impermanence, and the suffering that it’s caused you.

It starts from very young. (True confession moment.) I remember being a child and you know when you’re little a year from one birthday to the next is like an eternity. I remember a time—I must have been very young—my parents had a birthday party for me. They had a clown there, and my friends came, and of course I was the center of attention and I got a lot of presents, which was the best thing of all. Then at the end of the day when the party was over and my friends went home and I had to clean up and then that was done. (Actually, I didn’t clean up, I let my parents do it.) At the end of the day, what did I do? After this wonderful, happy day? There was one little corner in my room, and I went in that corner and I cried. Bawling. Because it was going to be another year before I had another birthday.

This is an example of how we fight coarse impermanence. It starts like that. Actually, it probably starts even younger, but we don’t remember. When our mother, or our father, or whoever’s taking care of us, has to do something else when we want their attention. So they leave to do whatever they need to do, and we scream and we cry because that’s not supposed to happen. Impermanence is not supposed to happen. We’re not supposed to be separated from what we want and what we like even for a nanosecond. And this is our preconception as we come into this world.

If you really look closely, see how much you’ve suffered from depression, and discouragement, and feelings of inadequacy, and all these kinds of things because we haven’t accepted that things are transient. Maybe you rank number one in your class, you’re the best person at hula-hoop, and so you think that’s great, but then once you have that status, as the best hula-hooper, then you also have the pressure to keep it up. And things are impermanent. And you cannot maintain your status as the best hula-hooper in your elementary school, and sometime somebody else is going to be better than you. Tragedy. We just don’t like impermanence.

Very interesting to watch and see how much we’ve suffered. Relationships come together. When we like the people that’s great. When we separate from the people we like. Well actually, we don’t separate. Either they separate from us or there’s some intervening circumstance—somebody has an accident, somebody dies, or whatever—then again we don’t like it.

Very interesting to see the suffering, and then to really meditate–do some serious meditation—on impermanence to try and counteract our grasping onto permanence that causes all that suffering. You can start by just thinking about coarse impermanence, how things change. You get a job, you lose a job. Whatever comes together is going to separate. We all know, you have money, and then you don’t have money. You live somewhere and then you don’t live somewhere. When we make the choice we think it’s okay. But so many choices are made by our previous karma, and that’s when we suffer a lot. So to really do some very strong meditation on the coarse impermanence, and also on the subtle impermanence.

Specifically in a culture that emphasizes good looks and looking young, and yet moment by moment all of us are getting older. This is totally crazy-making because we’re supposed to look younger and more beautiful, according to what society says. But actually, the natural process is we’re getting older and uglier. This makes us totally crazy and brings up all sorts of doubts about how competent I am, how worthwhile I am, blah blah blah. All these doubts about who we are as a human being simply because things are subtly changing and there’s no way to stop it. But we want to stay at some indefinite age where we were the most attractive. I don’t know what age that is when we were the most attractive. But it’s usually somewhere in your late teens, wouldn’t you say? Late teens, early twenties. After that, forget it. But think of what your mind was like in your late teens and early twenties. Physically, the most attractive. Mentally, pretty messed up. Do you think? When I look at my late teens/early twenties, pretty messed up. Very interesting how those things go together. [laughter] Hopefully as you age you become more mature, then you’re no longer physically attractive. Like I said, basically after 21, 22, you are over the hill. We don’t think that, we don’t think it, you’re the millennial generation. Let me tell you, I was the baby boomer generation, and we’re still the most into it, the most competent, the greatest generation. Except that nobody pays any attention to us anymore because we all look old. The same thing is going to happen to all you millennials. Wait ten years and you’re going to be “oh the millennial generation….” And there’s going to be, I don’t know what the new generation is called, but they’re going to be the ones that are really top notch, that everybody talks about and advertises for. And you’re going to join the club of us old fogies. [They’re laughing. Just wait.] It’s true, isn’t it?

Spend some time thinking about coarse impermanence and then also subtle impermanence. And then also remember how impermanence can work for you, too. This is where we also forget impermanence, is when we’re in a bad mood. Or when something happens that we don’t like. This is going to last forever. I’m going to be depressed forever. Nothing good is going to happen in my life forever. Wrong again. But again, we hold onto things as being completely…. “Okay, I feel lousy this moment, that means the whole rest of the day is lousy, tomorrow’s lousy, my whole life is lousy.

I had a friend who was a hospice nurse and she saw people in really extreme situations, and she said that you can’t hold onto an intense emotion for very long anyway. She put it at twenty minutes or forty minutes, but at the most. That’s it. But when you’re in the middle of an intense emotion, forget subtle impermanence, you think this is totally permanent, forever. It’s actually changing moment by moment by moment. And it’s going to end. You can’t hold onto it. You may say, “But it comes back.” But it comes back and it’s different, it’s not the same. Is your mind the same in two mind moments? Are two moments of anger, two moments of depression exactly the same? No. So we have to remember that, and we have to remember that these things are also subject to coarse impermanence, that even some of our very down mental states, they don’t stay there. They’re not there 25/8. (That’s for people who work overtime.) 25/8.

Remember that, and to watch things change, and to be okay with them changing. And know that this impermanence enables us to change and eliminate our defilements and develop our good qualities. 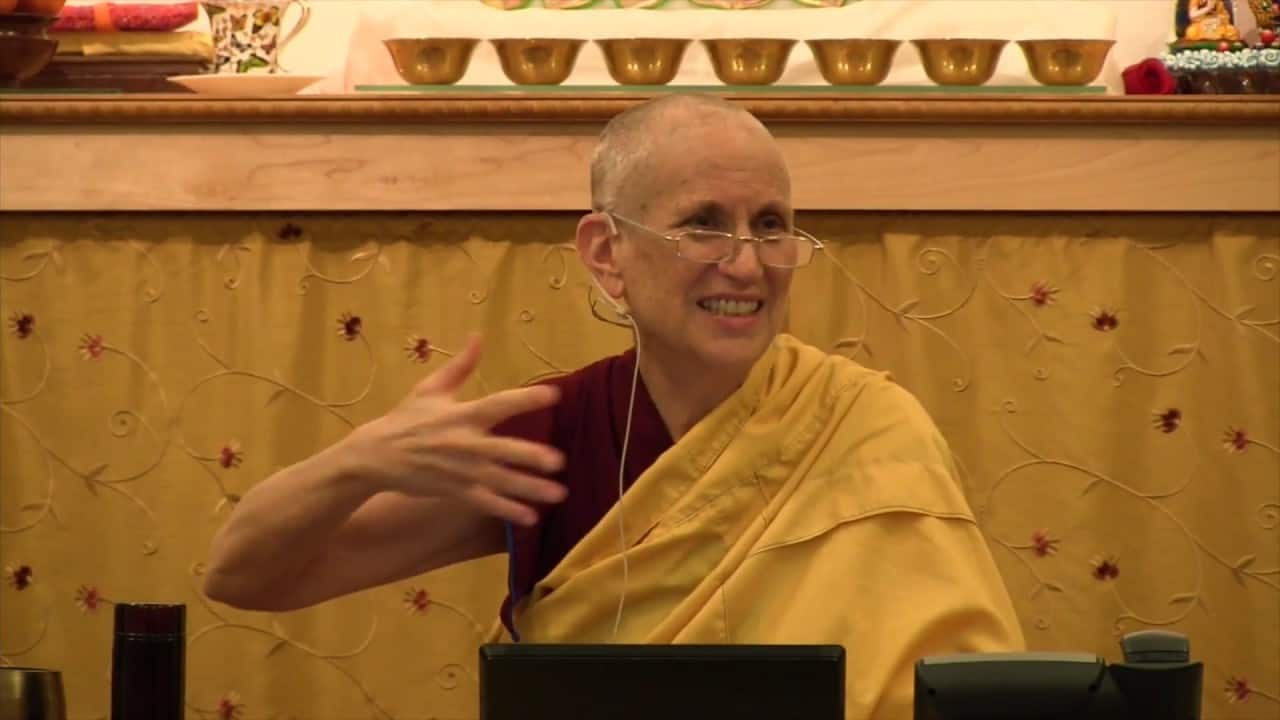 Taking on the suffering of others 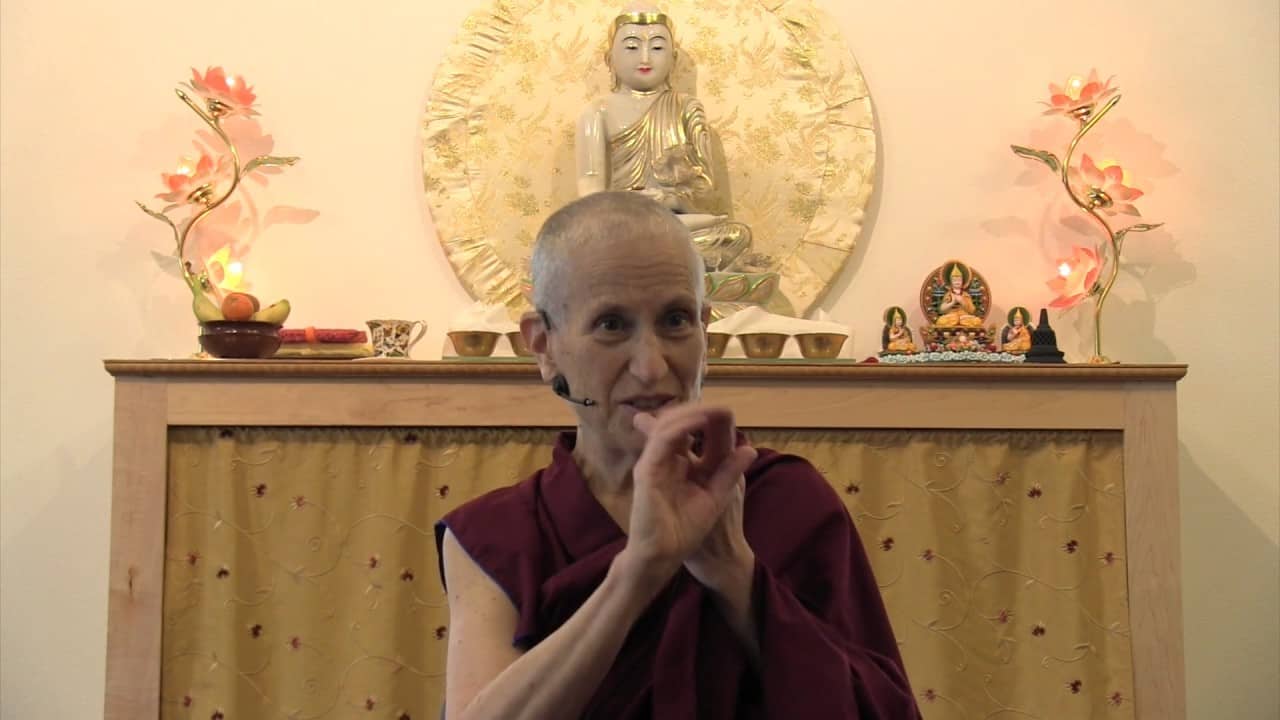