Today we’re going to start on the four attributes of true paths. When it comes to describing true paths there’s some difference between the Pali tradition and the Sanskrit tradition. In the Pali tradition it’s the eightfold noble path, which maybe we’ll get to later because I think it would be good to go through that briefly so people know that. And that’s, of course, included in the Sanskrit tradition, but when we talk about what the true path is from the Prasangika viewpoint it’s the wisdom directly realizing the emptiness of inherent existence. Of course, it’s built on everything else that is included in the noble eightfold path.

It also includes the Pratimoksha, if I remember correctly. Our monastic vows are considered true paths as well. And like I said, everything in the eightfold path is included in the Sanskrit tradition, but the real emphasis is on the wisdom realizing emptiness, because that’s the actual one that is going to cut the root of samsara.

There are four attributes of true paths:

The first one is,

The wisdom directly realizing selflessness is the path because it’s the unmistaken path to liberation.

The idea here is that this is the wisdom that actually leads to liberation. It’s the unmistaken path. That counters the wrong idea that there is no path to liberation. And if we look around society….. And remember the same happened with true cessations. The first attribute was indicating that true cessations do exist. If you look around, many people, the view of life is just, “This is it. There’s no way out of it.” They’re really not even aware of what they’re in. “There’s no way out of it. There’s no path out of it. So let’s just make the best of it we can and see if we can remain as happy as we can, and that’s it.” And that becomes the whole purpose of the life. Whereas when you have some awareness that true cessation does exist, nirvana exists, and that the path to it also exists, then the whole purpose of your life has a totally different meaning, doesn’t it?

Because when you see we’re in a really big jam, being in cyclic existence, we have a precious human life, this opportunity to really make some progress and try and get out of it, and there’s a path to follow, then we’ll put our energy into that path. When we have that strong in our mind then it really begins to overpower the laziness that leads us to sleeping too much, to getting distracted by meaningless things—the news and so on. I mean, you have to keep informed, but the compulsion to read the news. And also discouragement, and how we waste our time just feeling sorry for ourselves: “I can’t do anything, and anyway there’s no path, and what’s the use, it’s all hopeless.” When you really have some view that there is a path out, when you really believe that, then it’s going to come in direct conflict with the tendency to laziness. If we don’t think there’s a path then we’ll never learn it, we’ll never practice it, nothing really changes.

The second one is,

The wisdom directly realizing selflessness is suitable because it acts as the direct counterforce to the afflictions.

This eliminates the idea that the wisdom realizing emptiness is not the path to liberation. Some people may think, well there is a path, but it’s not the wisdom realizing emptiness. It’s the path of praying to God, or propitiating protectors. There are so many different paths from all the different religions. If we’re not sure about the wisdom realizing emptiness being the path then it’s easy to get distracted by all these other paths, some of which emotionally they make you feel better, just the idea of them. “I just worship God and leave it all to God, and I don’t need to do anything except worship.” And for some people that makes them feel so much better. For me it drove me crazy. I couldn’t do that. But for other people…. But then you follow that path, but where does it get you? Because that kind of path is not the direct antidote that is going to obliterate ignorance. We need something that’s the complete opposite of ignorance.

When we have confidence that this is the direct path, then of course we’ll be eager to practice it. And of course as we know, generating the wisdom realizing emptiness is no small feat, and it takes a lot of study, and then thinking about what we’ve studied and putting it into practice and meditating on it. And the study itself is not easy, you have to learn all these new vocabulary words that you’ve never heard of before, and all these concepts that you’ve never heard before. And then you have to hear these great sages debating each other over points that you have no idea what they’re talking about. But it’s all for a purpose. So if you really have confidence that this is the path, it’s going to overcome your ignorance, then you’ll stick with the studies and you’ll do them, and you’ll realize that it takes some time, so you go slowly, slowly, but as you go slowly, just like the turtle, and eventually we’ll get there.

Whereas if we don’t think that this is the real path then we say, “Well why learn all that stuff? It’s too

difficult, it’s too complicated, I’ll never understand it anyway, so let’s just say some mantra.” And that’s what many people in the tradition do. They figure that stuff is for the professionals, and I’ll say mantra. So you have a precious human life, and even if you don’t understand everything completely, you can certainly put so many good imprints and seeds on your mindstream, but you miss that opportunity.

This wisdom knows also the faults of the afflictions. It knows how ignorance is a wrong consciousness. And it knows the correct way to apprehend phenomena. It’s a wisdom that we can trust. And if we develop it inside then we can really trust it because we’ll see how it works.

Audience: That first point really struck me because my neighbor (that I used to live next to) noticed that I would get moody, and she would cheer me up by saying something like “Well this is as good as it gets.” And it worked for her, and it was helpful for me in the sense of she was very caring and I needed to kick myself in the pants, but what I was realizing as you were speaking is that view of “this is as good as it gets” really wouldn’t help me with aging, sickness, or death. What would I do with those, and that’s kind of what we’re confronted with. Whereas with this path, you use all those things. 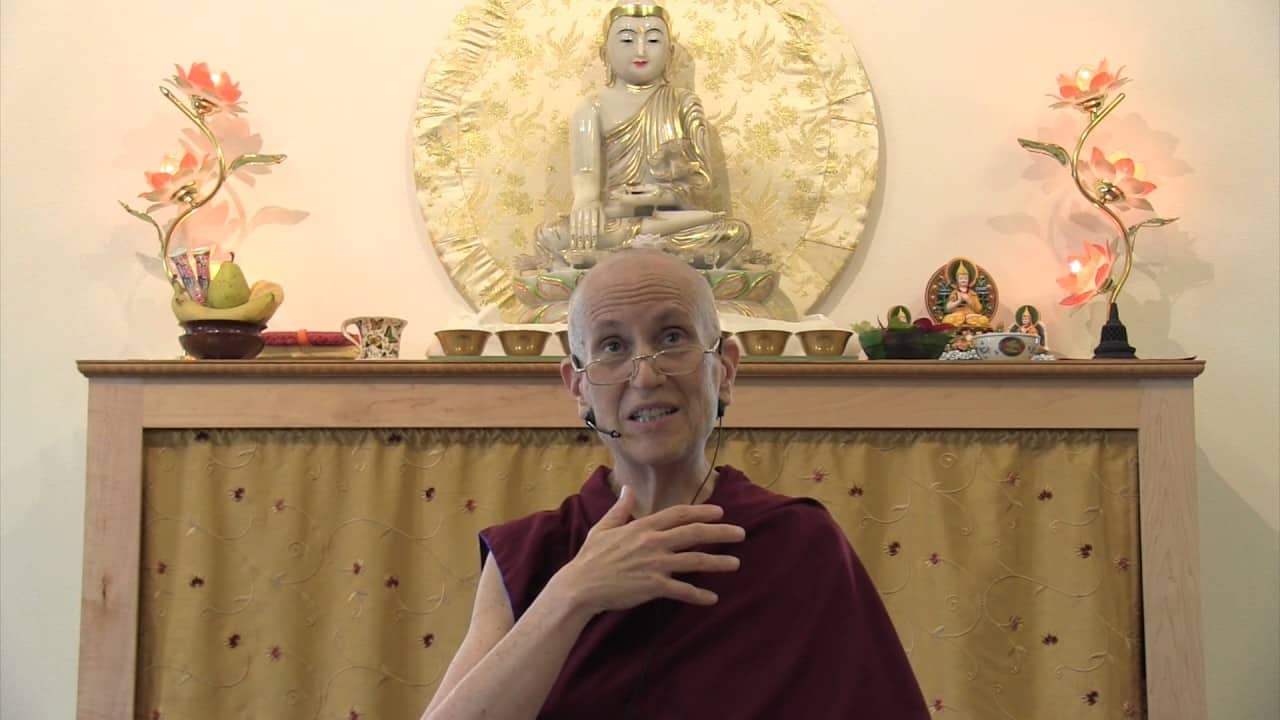 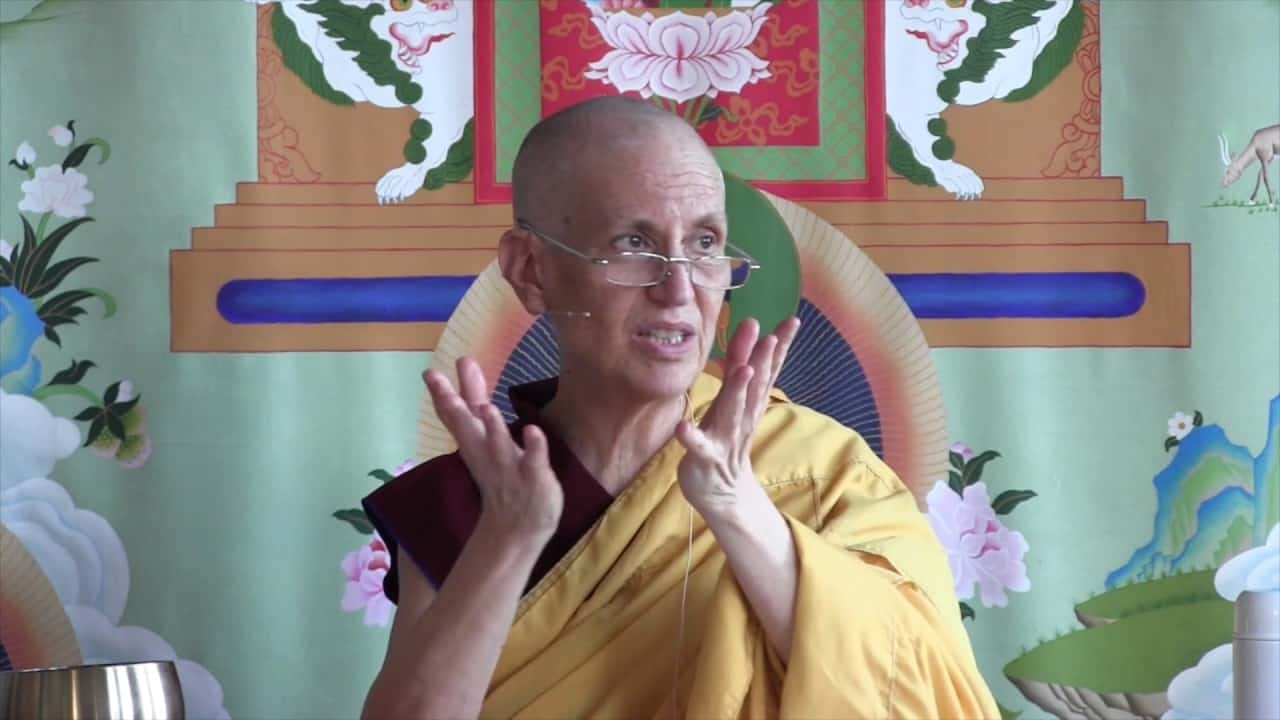