We’ve been talking about the four attributes of true cessations. It’s using the example of an arhat’s nirvana. To review:

Nirvana is the cessation of dukkha because of being a state in which the origins of dukkha have been abandoned.

Nirvana is peace because it’s a separation in which the afflictions have been eliminated.

This counteracts the detour that some people take when they get stuck in the meditative absorptions of the form and formless realm. Those are so blissful, and you suppress the manifest state of afflictions, and so some people take that as liberation and they stay in that for a really long time, but because it’s not actual liberation, when the causal energy is exhausted, kerplunk. Down into the desire realm.

The one we’re doing today:

Nirvana is magnificent [magnificent is the third attribute] because it is the superior source of benefit and bliss.

What are the three kinds of dukkha?

It’s free of those three types of dukkha.

For example, let’s say somebody generates the union of serenity and insight on emptiness. That’s going to bring you a lot of space in your mind, a lot of peace in your mind. So, if you say, “That’s nice, that’s good, I’ll stay there,” then you’re not going to accomplish your goal, because you’re confusing a state that’s on the path to nirvana for something that’s superior to nirvana. We don’t want to do that, because if we just become complacent on the path—we get some good experience and then we become complacent—then that’s going to last for a while and then it’s going to stop.

The fourth one here is:
“Nirvana is freedom….” (The term is niḥsaraṇa. There’s a Sri Lankan temple in Singapore called Niḥsaraṇa. Niḥsaraṇa can also be translated as “definite emergence.”)

Nirvana is freedom because it is totally irreversible release from samsara.

This counteracts the idea that you can attain liberation and then lose it. Kind of like you could win the jackpot and then become poorer again because you spent all your money. Something like that. This is really making sure that people understand that nirvana is the definite abandonment of all the afflictive obscurations. It’s not a temporary abandonment and then they’re going to come back again, but once we have irrevocably eliminated the afflictions there’s no possible way they can come back again. Why? Because when you have that wisdom that sees reality, and it has counteracted the ignorance, because that wisdom sees things as they are how can you have a resurgence of the ignorance that has been eliminated? It’s like once you’ve turned on the light in the room and the light is going to be eternal, how are you going to bring back darkness in the room? You can’t. Once arhatship is attained you’re good to go, forever. It’s not going to degenerate. There’s no way again to be reborn in samsara. That’s really good news, isn’t it?

These are the four attributes of true cessation. When we meditate on them deeply it can help us overcome wrong notions we have about liberation, such as “it doesn’t exist,” or, “gaining meditative absorption is sufficient,” or just having an inferential realization of emptiness is good enough, or even if you attain nirvana you can lose it again so why make the effort. If we have those kinds of misconceptions in our minds then we’re not going to practice wholeheartedly. Whereas if we can think about these and examine them closely and really look “why is that so?” and understand, not just “okay there are these four, what’s next?” but really understand why these four attributes are true, then that can eliminate a lot of our doubt and confusion about what liberation is. And having eliminated that, then just gives us a lot of open space to practice. Because what stops us so often? It’s doubt, isn’t it? “Is this possible?” Or you take a detour, you go the wrong way. These four will help us to avoid that and will enable us to really develop a pure intention for liberation. Or in our case what we’re seeking is non-abiding nirvana.

Audience: How does this match up with the idea that some of the hearers and solitary realizers might still have some afflictions. Is that only a lower school’s point of view?

Venerable Thubten Chodron (VTC): That must be lower school’s viewpoint, it’s certainly not Prasangika viewpoint. I know there was a big debate—when was it, maybe around the time of Ashoka or slightly after him—about whether arhats can get some of their afflictions back. There was some kind of debate. But I think they settled it, they had another council, and they said no, that once arhatship is attained they’re free of afflictions and that’s it.

Audience: I always get a little nervous about how easy it would be to fall into the bliss of meditation and not keep going, so I’ve thought about the antidotes and it would seem that bodhicitta would be one really powerful thing that would keep you going, but then for the hearers and solitary realizers, do they talk about what keeps them on the straight and narrow….?

VTC: For the hearers and solitary realizers, their motivation would be renunciation and the aspiration for liberation. If they have some kind of introspective awareness they can tell that they’re not yet arhats, and then they will keep on going on the path.

In the same way bodhicitta keeps you going on the path, but you could probably get somebody who says, “I got pretty far, this is good enough.” And mistake it for full awakening when it’s not.

Again, this is some of the advantage of when you’ve done some study and you know what are the attributes

or qualities of nirvana. What are the qualities of awakening then you can check your mind and see, “Do I have those qualities?” Or my object of meditation, does it have those qualities? That’s the advantage of knowing that is you have some reference to check yourself. And of course, if you have a good teacher he or she will keep you on your toes, too. Send out a few of Atisha’s cooks to see how liberated you are. [laughter] “Let’s test your liberation. A few Atisha’s cooks, a few monks from Italy….” [laughter] There we go. We become humble again. 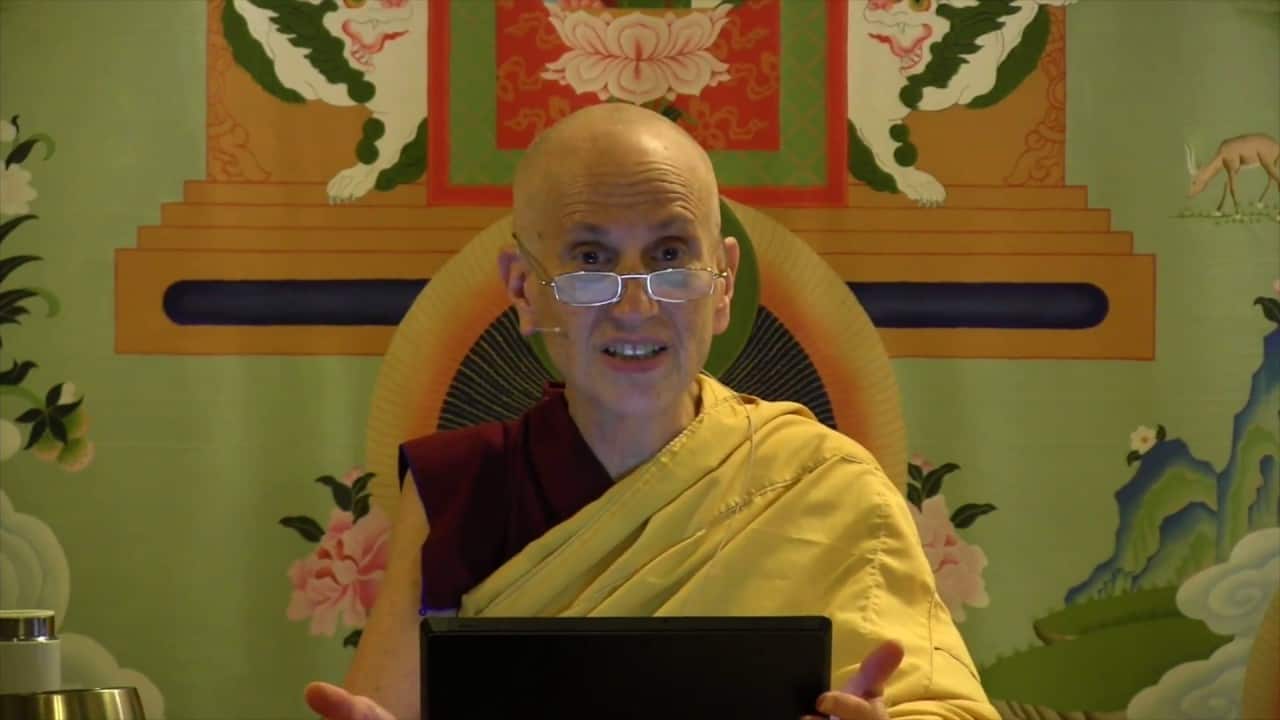 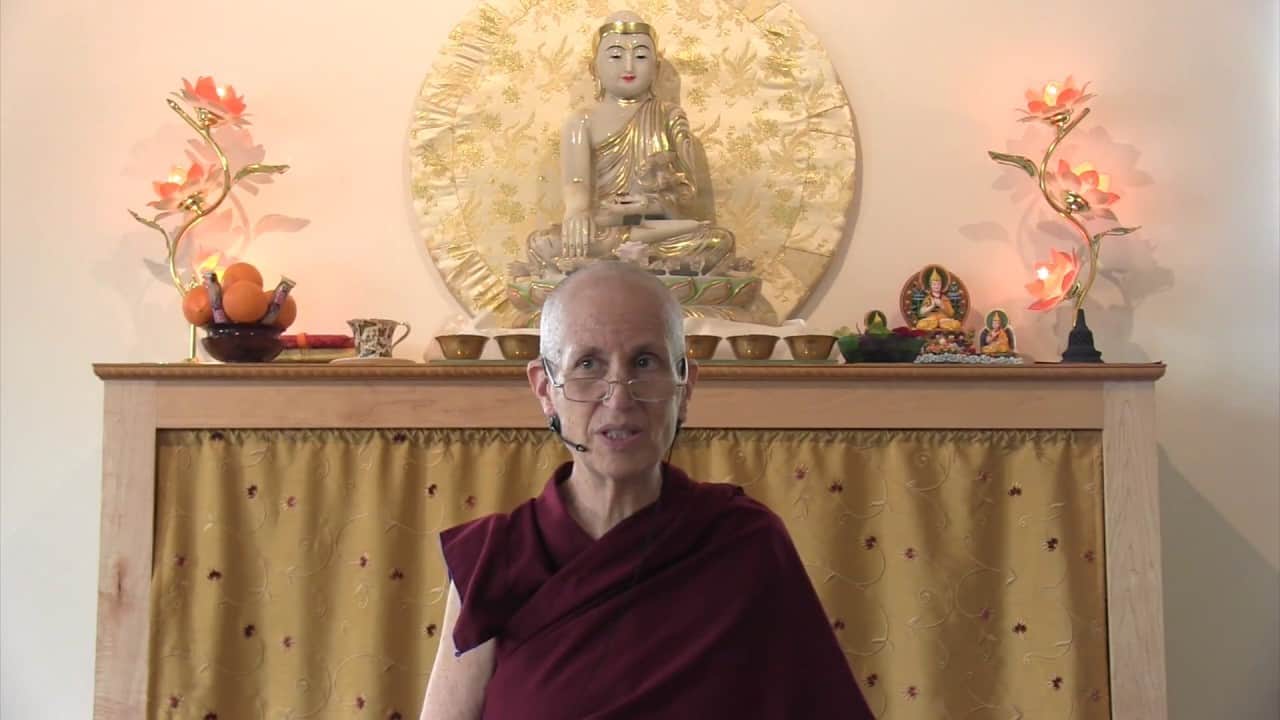