We’ve been talking about the four attributes of the true origin of dukkha. The first one (to review) was that it is the cause of dukkha because it makes dukkha constantly occur. In other words, our dukkha arises from causes, it’s not without causes. And the second one was that craving and karma are origins of dukkha because they repeatedly produce all the different kinds of dukkha. That overcomes the idea that our situation is due to just one cause. We have to expand our minds and really look at all of our actions, all of our mental states, everything that is going on–whether we rejoice at actions after we’ve done them, whether we regret them, whether we purify them, whether we don’t. All of this has to do with the extent of the influence of the afflictions and craving and karma.

The third one (that we’re on today) says,

Craving and karma are strong producers because they act forcefully to produce strong dukkha.

If you don’t believe that you experience strong dukkha—because we had these delightful spinach and fruit smoothies today, so you think samsara is pretty great because of that—then what can I say? [laughter] Go back and do more meditation on the four establishments of mindfulness, because they really bring out the fact that samsara is really an unsatisfactory state altogether.

This one of strong producers counteracts the idea that our dukkha can come from an external cause, such as a Creator, an external being. So many faiths have that kind of idea, that not only were we created by some other prior intelligence, but that this prior intelligence arranges what happens in our lives, or causes what happens in our lives in one way or another. To test us. Or a more modern version of that is they don’t actually say a prior intelligence, but somehow things are planned such that there are lessons for us to learn in life. As soon as somebody says “I have a lesson to learn,” as if it were planned by somebody else, then it’s bringing in that idea of some kind of external creator.

If there were somebody else causing our problems, then we should really talk to them. Instead of worshiping them, we should complain. [laughter] Kind of like when you don’t like the president, you complain. Don’t you? Similarly, we’d say we don’t like this at all.

You can see that people who have this kind of belief, it assuages their inner pain because they feel that they have no control over what happens to them. To say, “It’s God’s will,” it’s just very comforting for them. “I have no control over it, some superior being planned this, it has some purpose that I don’t understand, but I can just relax and trust.” It’s very comforting for somebody who believes in that kind of way.

For those of us who that kind of viewpoint doesn’t satisfy, because we say, “Well if somebody else is responsible for our suffering, why did they make us suffer? And if it’s so we could learn lessons, well if they’re a creator, why didn’t they create us smarter so we didn’t need to learn those lessons?” For many of us that kind of explanation doesn’t suffice. And when we look we see that the things we experience, the rebirths we take, are due to our own actions. And then that makes us actually take responsibility and change our approach, change our actions.

When you say it’s due to somebody else’s will, then you have no power, and you never think that maybe you have to change your actions. Except maybe to please that other being. But again, if that other being is compassionate and all-loving, they shouldn’t depend on us pleasing them.

One of our volunteers is a teacher at a middle school, and a few years ago one of her students was killed. Was it a car accident? Something with a car. And the child died. The community around–it’s in Idaho–quite Christian. So the friends were told, “Well, this is God’s will.” And apparently one of her students said to her, “I don’t like God if this is what he wills. For my friend to die. When my friend didn’t do anything.” That child’s thinking.

Sometimes we blame a creator or another person for our experiences. Sometimes we just say there’s a lesson to learn as if there was a lesson plan created by somebody else.

In Buddhism, nobody created lessons for us to learn. There are definitely things we can learn. But whether we learn or not is up to us and no external being created these learning opportunities for us. It’s just our karma that is ripening. And then we can either learn, or we can keep doing the same stupid things. It’s kind of up to us.

Also, sometimes, if we get tired of blaming an external being, or thinking that there’s a lesson, then we blame other people. Why am I suffering? Because this person did this, and that person did that. And again, attributing the causes of suffering to outside of ourselves, instead of seeing that our actions have an ethical dimension, and that we have a choice when we act. We often say we believe in rebirth, but when we make choices and decisions…. Not even major choices or decisions, but just we’re choosing all the time when we have an intention to do something. We often don’t take future rebirths into consideration when we are choosing the actions that we do or the words that we say. Not realizing that, then when things don’t turn out the way we want we get angry at somebody else. That also doesn’t work. We keep doing it, and it keeps not working. You can even win a court case–this accident was due to somebody’s recklessness–but it doesn’t undo the accident. We may be insulted by somebody slandering us, and then we sue them for libel, but even if we win, the basic problem is our attachment to reputation and praise. And that doesn’t really change so much.

Really keeping that in mind, and really stay focused—ignorance, craving, karma—these are strong producers of dukkha, not just today but in all of our previous lives and in all of our future lives unless we start to do something about it.

These kinds of meditations, they aren’t the life, love, and bliss kind of meditations. But I think they’re very helpful for making our minds sober. When we start to get a bit too excited about our spinach fruit smoothie, or the next Dharma activity we’re going to do once this retreat is over, then it just kind of brings us down to really, what is my main problem? What is my main situation? I’m in samsara under the influence of afflictions and karma. Why do I have all my different problems in life? Because of that. That’s the main problem. So instead of getting upset about all the little problems, let’s focus our attention on the main one and counteract it, and by doing so then all the little ones automatically go away.

Sometimes in the teachings the Buddha gives us the carrot approach, and sometimes the stick approach. And I think we need both of them. Do you see how these kinds of teachings are hammering away at our ignorance that says, “Yeah I believe in rebirth, but….” Or, “Yeah I believe in karma, but…. Yeah, I know that my happiness of this life isn’t the most important thing, but…..” That these kinds of things really they hammer away at that and we need that. We very much need that. 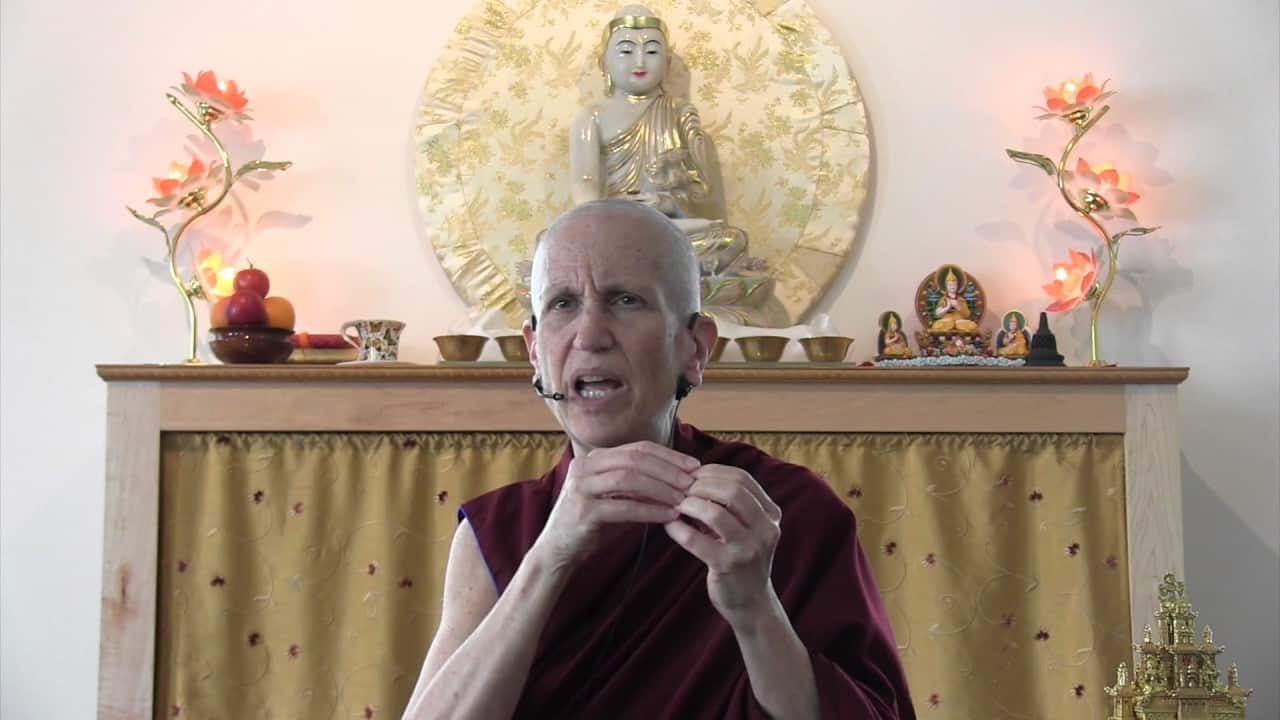 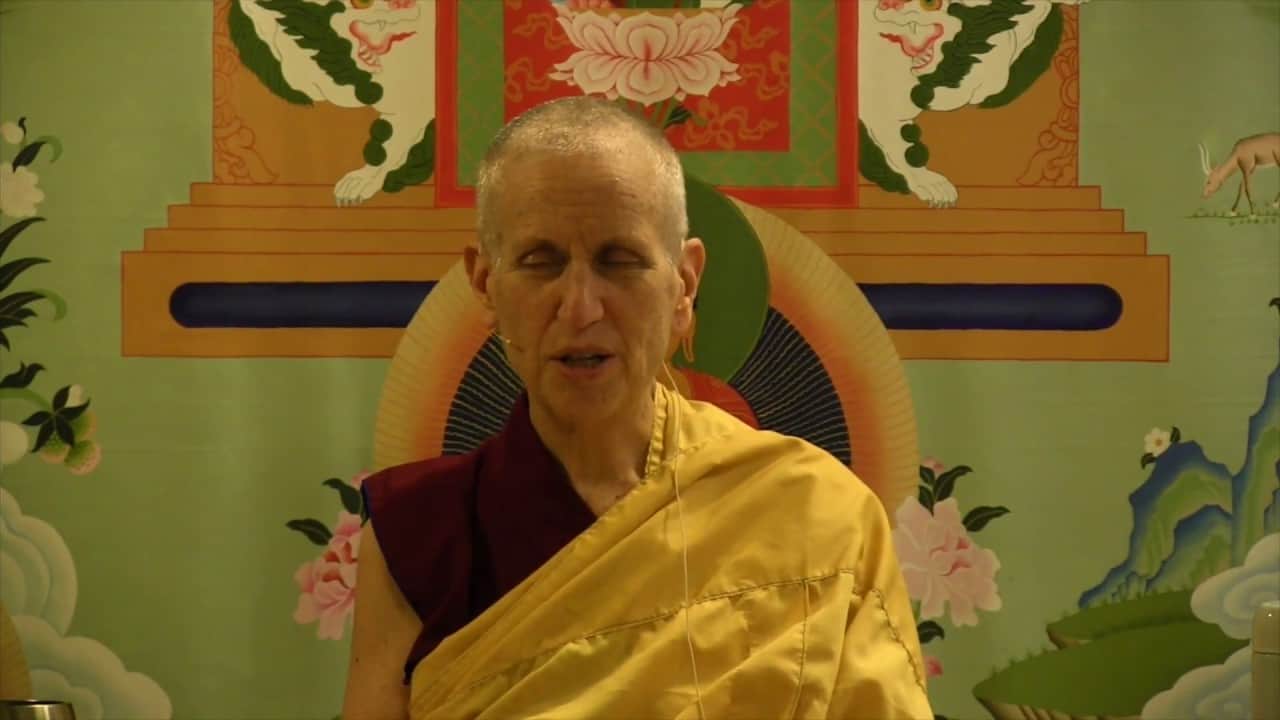