Excitement and laxity; not applying and over-applying the antidote

The final three of five faults to concentration

In terms of the five faults [to concentration], we’ve talked about laziness—my favorite one—and then forgetting the object or not being able to sustain the object in our meditation—our next favorite one!

The third fault actually has two parts: one is excitement and the other is laxity. We know those very well. Excitement is the mind that is distracted towards objects of attachment. Very curiously here, in this presentation by Maitreya and Asanga, it really highlights excitement. It doesn’t say anything about getting distracted by anger, or wrong views, by doubt, or anything like that. That’s why I like to include both presentations [of the five hindrances and the five faults to concentration] because together it seems to me to really flesh out the hindrances a little bit more.

Then, in terms of laxity, there’s a gross form which is really where the mind is dull. Not where you’re drowsy and falling asleep, but just where the image isn’t very clear. Also there is a more subtle form of laxity: in which the image is clear but there’s not an intensity to the clarity. They say that it’s easy for mediators to have this subtle form of laxity and not recognize it and think that they’ve actualized serenity. There’s a subtle form of laxity that you can easily mistake as serenity because there’s clarity but it’s not very vivid and bright. It’s not very intense. They say to really be careful about that one.

The antidotes to laxity and excitement

In the case of the gross (or the coarse) agitation or excitement because the mind’s too energetic, you want to settle the mind. To do this meditate on death, meditate on the disadvantages of samsara, and so forth. Of course, if you can just renew your mindfulness and get your mind back, that’s the best thing to do. But when it’s really strong, you need to temporarily go off your object of serenity and do one of these reflection meditations on impermanence or death, or defects of samsara, or something like that.

This is important to realize because, I know for a long time when my mind would get drowsy, then I would think about death. Like, “Oh, I’m going to die. I’d better wake up.” In some instances (like when you meditate on death), they give that as an antidote. They say don’t sleep because you’re going to die. But in this case here, if your mind is too lethargic then you want to give it some happy energy, uplifting energy. So you don’t meditate on death at that time, but something that’s going to encourage and uplift your mind.

Not applying the antidote

The last fault is over-applying the antidote. In other words, you’ve dealt with the problem, you’ve gotten your mind back, and you still continue to apply the antidote. In this case now the antidote becomes a distraction. It’s kind of like as a parent, when your child’s acting out, you tell the child to calm down. The child calms down and you keep telling him to calm down. That only makes more problems.

So those are the five faults and the eight counteractions.

Audience: Say you realize that you’re really off: that my mind’s hyper, so to stop and meditate on death and do the nine points [of the lamrim death meditation]. But by then, when the mind gets sober, I’m actually so into the nine points that there’s a point where I wonder, “Should I stay with where I am (which is actually having a meaningful effect), or should I go back to where I left off, (which was my intent).”

Venerable Thubten Chodron (VTC): So the question is if you’re doing a retreat to cultivate serenity, then you use the antidote of the death meditation to calm your mind down to the point where you can then bring it back to your object of meditation (which is the figure of the Buddha, or the breath, or love, or whatever it is) because that’s the main focus of your retreat.

You’re saying that you start to do the death meditation. It starts to bring some real experience so you don’t really want to go back. I would say that if you’re doing the White Tara meditation, it depends on what context you are meditating on death. If you sit down to start your meditation, and you realize that your mind’s really hyper and you meditate on death in order to calm your mind and help you get a good motivation, then stay with your death meditation. That’s the purpose that you’re trying to use it for: to calm your mind so that you can do a meditation (so that you can do the Tara sadhana). So that’s one context of using it.

Audience: I’ve been trying to create the good intensity of the object and the mind becomes tight. How do you work with that?

VTC: Then you meditate on death again. You see when we’re talking about excitement and laxity— In excitement the mind is too tight. In laxity the mind is too loose. So you’re saying if the mind’s too loose, you meditate on something to uplift it and then it gets too tight. Well, try and just meditate on something to lift it to the point where you need it. You know we really tend to be extremists. It’s like the water’s too cold so then we put our hand in boiling water. And then it’s too hot, so we hold ice. We’re just too extreme. We need to get somewhere in the middle.

But this happens in all areas of our life, doesn’t it. We so often go from flip-flop, from one extreme to the other extreme. We don’t know when to stop. 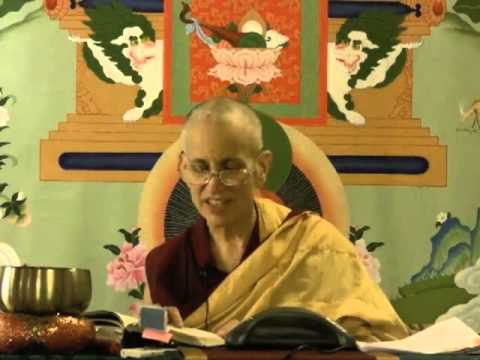 Identifying mental factors within our own minds 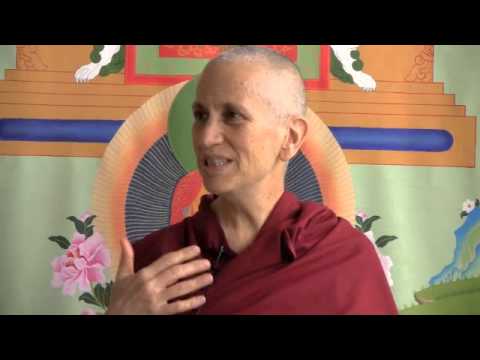 The mantra and purifying karma