Somebody is asking about when we do the self-generation practice. We generate ourselves as the deity and then use that generated deity that is the manifestation of our wisdom realizing emptiness. When we use that as the object for cultivating serenity or shamatha, how big do you visualize it? Gen Lamrimpa writes in his meditation book, and usually it’s said, that when you’re visualizing the Buddha external to yourself (not as a self-generation, but external), they usually say the smaller the better because it helps your concentration. So you are focusing smaller and being really sharp. They start out saying if you can, do it the size of the sesame seed. If you can’t do that, try the size of a thumb. If you can’t do that, try about a foot high.

In terms of visualizing yourself as the deity, it’s the same thing. Usually we start out with the deity the size of our regular body, because that’s the kind of feeling that we have for what our body is. What’s interesting in doing this is we begin to get a sense of how much our awareness of our body is actually conceptual. We usually think of our body as, “I’m just having this direct experience of it.” But anybody who is a teacher of elementary school children will know that you have to learn how to identify your body and your body image. Kids don’t naturally have that. Babies get frightened by their own crying and they can’t identify when they look at what is their body and what isn’t. That whole way of when we sit there and just feel “my body,” that’s conceptual in our mind. It’s really quite interesting to look at, because it feels like there’s a real body there, but it’s basically our concept of our body.

What do you think? You’re an elementary school teacher? Did you have to teach kids how to, get a sense of their body?

Audience: Not so much that but to keep away from other people’s. [laughter]

Venerable Thubten Chodron (VTC): She had to teach them to keep away from other people’s bodies. That’s true.

Audience: I’ve learned a few things about perception in infants, how they learn perception. They go through these stages of where, for example, you have a toy and you put it away from them, and they won’t remember that it’s even there. Later they’ll hit a certain developmental stage where they remember things. Infants have all these kinds of learnings like that and they come on developmentally.

VTC: Definitely. There are whole developmental stages to our perception, but then often we begin to make these things quite concrete afterwards.

It’s interesting when you’ve dissolved your body into emptiness, and then you generate as the deity’s body and think that it’s your wisdom that’s generating. Why do we automatically feel that the deity’s body is the size of our ordinary body? We’re so ingrained with this notion of our ordinary body. You can be sitting like this, and Tara’s sitting like this, and then all of a sudden it’s like, “Well, wait a minute, where’s my hand? Is it here? When I’m meditating, do I have to sit like this to really develop serenity on the meditation object? But if I’m sitting like this, wait a minute, what’s going on here?” It’s quite interesting. I think it really makes us question our notion of our body and who we are, how much we identify with this body. Even after we’ve supposedly dissolved it into emptiness, we have a very strong conception, “It’s here.”

Audience: When I’m doing this visualization, I find that for me to have a more vivid visualization I have to bring up the qualities. I don’t think you’re supposed to do that, but I say, “Swift and fearless,” or any of the verses of Praises to Tara.

What’s really important is that body is made of light. So you don’t feel it as you feel your regular body. It’s a different kind of mindfulness of the body meditation. When you’re doing the four establishments of mindfulness, you’re doing it on this body, and coming to understand what it is, and what it’s composed of, and so on and so forth. When you’re doing it on Tara’s body, similarly, you’ve generated this body made of light, and you come to be familiar with it and what is it made of, and how is it structured. How does it feel to have a body of light? Having a body of light that is not inherently existent is going to feel a lot different than our ordinary body.

If you’re meditating on the image of yourself as Tara and trying to develop single-pointedness on that, you have to keep coming back to that. So, your stomach isn’t going to hurt. Your little toe isn’t going to hurt. Things aren’t going to itch. All these things that we associate with our regular body made of flesh and blood, we’re going to have to dissolve those things into emptiness as we focus on this non-inherently existent body that’s just appearing. Why is it made of light? Because that helps us to see that it’s not inherently existent. It’s like a rainbow. It’s not a body made of light [in the sense that], “This light has this specific form, and the light only goes so far and then it stops.” That’s our idea of light, isn’t it? “Okay, I’m Tara made of light and it’s the light that only goes that far and that’s me.” We’ve got to start to question that. So it’s a different kind of mindfulness of the body, but quite effective.

Then I suppose as you get more focused, you could probably make it smaller. But again, I wouldn’t try to do that right away because your mind will get too tight. 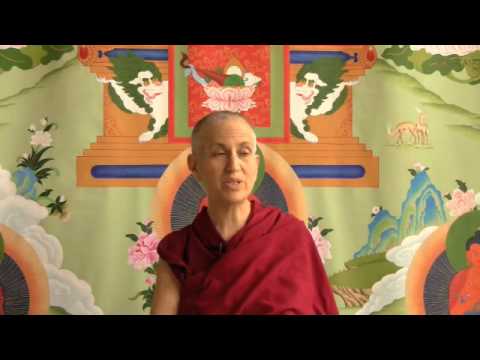 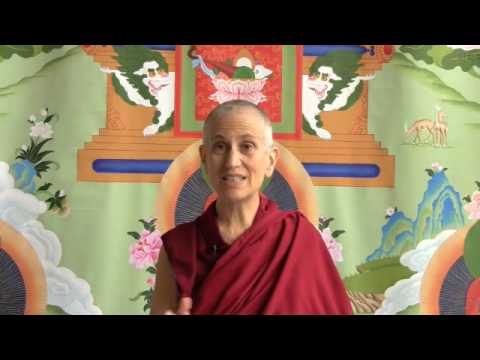