There are some questions here. Somebody is asking about when you do the absorption of the Buddha into you: “To do this, it seems like you already have to have the mind of the Buddha to be able to do the meditation correctly.” This is where our perfectionist mind gets us tangled up. We forget the word practice. We forget that we do these visualizations not because we already are those things, but because we are trying to become them; in the same way when we’re little kids we dress up, and imagine doing all these adult jobs. By having that imagination, when we grow up we will then be able to do it. Similarly, here too, when the Buddha absorbs into us we shouldn’t think, “Oh, my meditation’s a failure, because I’m not a buddha after the Buddha absorbed into me.” If we were already a buddha we wouldn’t need to do this meditation.

Please remember when you’re doing things on the level of imagination, you’re not doing them wrong if you don’t end up with the final result. When you visualize yourself as the deity, when you’re meditating on emptiness, you arrive as the deity and then in the middle of it you may think, “My big toe hurts. Oh, my whole meditation is a failure, I haven’t meditated on emptiness. I haven’t done the self-generation correctly. This technique doesn’t work for me.” Don’t have those kinds of expectations. These are all ways for us to practice, to try these things, to slowly gain the understandings.

This whole judgmental critical mind is a very big problem for us. This whole mind that sees one little instruction, then if we don’t get the result we think we should get, one of two things happens. Either we say, “I’m a failure.” Or the second thing we say is, “The Dharma doesn’t work.” Where does that leave us if we do either one of those things? Can we afford, in our suffering state of samsara (going around and around in rebirth), to get stuck in either of those ideas when we need the Dharma so desperately to cut through the root of our samsara? That mind that goes to either of those things is just completely the ignorant mind, self-centered mind, sabotaging us. We can’t afford to follow that mind because it will lead us in the wrong direction.

It takes time for us to gain some conviction in the Dharma. When we’re new and we hear the teachings, sometimes we get a flurry of excitement in the beginning because a lot of things click for us. Then time goes on and, “Well, I’m still the same old person.” Then we start doing some practices with all these expectations like this kind of question indicates. We need to give ourselves time to develop conviction in the Dharma. We do that by studying, and thinking about it, and asking questions, and trying it on.

Over a period of time, when you start to realize that what the Buddha said applies to your own situation, and that it actually makes sense, then you get some conviction in it. Then, based on that conviction, you keep practicing and you don’t have the expectation that you’re already supposed to be a buddha. Your conviction becomes the Buddha’s description of the basis (what is right now), and his description of the path (of how you transform that, how you practice it), and his description of the result (where we are going to). We have confidence in all three of those and we begin practicing the path in order to get to the result. But we have to do that through understanding the basis, where we’re at right now.

We don’t get to the end by expecting ourselves to be at the end. To practice, we need this kind of confidence in the teachings. I know for me at the beginning, the way the confidence came to me was how the Buddha talked about how attachment is a source of suffering. I had previously thought that attachment was a source of happiness. When I began to look at my life I realized, “Wow, the Buddha’s right!” I began to see what an amazing amount of attachment I had. At that point I could have said, “Oh, I have so much attachment. I’m doing it all wrong. I’m not supposed to have any attachment because attachment is bad, yet my mind is plagued by it. I can’t practice the path, it’s all wrong. I’m wrong, the path is wrong, it doesn’t work. I’m going to go out and have some pleasure instead.” Go back to my habits. I could have done that, but my mind didn’t work that way because I knew if I went back to the attachment, I’d be in the same hole I was in before.

The way my mind went was, “Oh, my goodness, I’m seeing so much attachment in my mind but this is exactly what the Buddha said was the cause of suffering, and he’s right!” When I look at my life, this attachment was driving me nuts. I thought it was happiness the whole time. So even though I still have all the attachment, now at least I see that it’s something that doesn’t serve me. Where did I get that understanding? It was from the Buddha’s teaching.

From that basis then I felt, “Wow, the Buddha’s a good guide.” And I thought, “Wow, the path is working. It’s working in that it just made me be able to identify this thing that was causing me so much misery, that I thought was a cause of my pleasure.” So even though I still had it, there was progress on the path from being able to identify it.

Instead of hammering ourselves on the head because we still have attachment and we aren’t buddhas yet, when the Buddha absorbs in us say, “Oh, I recognize now more of what’s keeping me from doing that, what the source of my suffering is.” Being able to recognize that is progress. That gives us really deep conviction in the Buddhadharma, and that deep conviction is what’s going to sustain us over the long term.

Whereas, if we go into the Dharma with the same mind that we go into when we’re studying in a secular field, like, “Well, I study it, and then I’ve got to know it, and tell the teacher what they already know,” then that’s not the right way to approach the Dharma. If we go into it expecting ourselves to be like the NBA, it’s like, “I’ve got to be the best basketball NBA player right away or else the coach is going to yell at me.” Meanwhile, you’re in fifth grade basketball and you’re three feet tall.

So none of that makes any sense, does it? Don’t expect yourself to be an NBA champion. Just having an interest in playing basketball, even when you’re small, that’s good. You’re going to get there. Michael Jordan, he’s a basketball player, right? (I get them all confused.) He was once three feet tall too, wasn’t he? He didn’t come out of his mother’s womb being like that. Oh, my goodness, what his mother would have gone through. So it’s the same way when we’re practicing the path. Please remember this. It will save you a lot of misery. 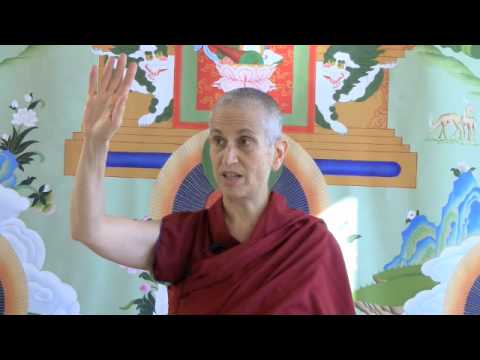 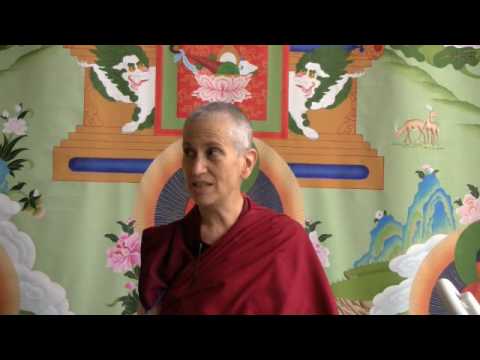