Question: How does negative karma get purified during White Tara sadhana without doing the four opponent powers?

Venerable Thubten Chodron (VTC): In the text of the White Tara sadhana, the four opponent powers aren’t listed out one, two, three, four, but you include them in your meditation. The refuge and bodhicitta are there at the beginning, then doing the White Tara mantra and the visualization of the light coming through is the opponent power of remedial action. Then, if you are going to purify at all, what motivates you to do it is having regret; and the regret should, hopefully, bring a determination not to do it again. If you have regret, but you don’t have the determination not to do it again, then I am not sure how sincere the regret is. You know what I mean? We have to look at that action and just (say,) “Uuugh! I really regret that. I am not going to do that again. It doesn’t serve me, it doesn’t serve anybody else. ¡Hasta finito!” So, you generate that kind of feeling and then you do the sadhana. In that way it includes the four opponent powers even if they are not listed out one by one – in your mind you include them.

Question: Can we elaborate on the visualization to add other qualities we aspire to? For instance, thinking that the uptala flower represents strength, discipline, and determination because it grows out of the mud? 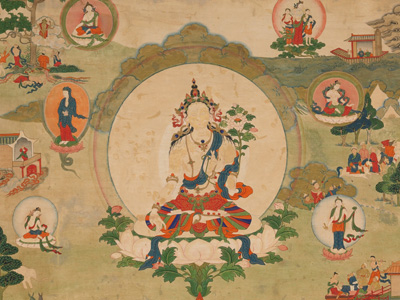 Tara is holding the uptala flower. They have their roots in the mud but are unstained by the mud. (Photo by Google Cultural Institute)

VTC: Yes, Tara is holding the uptala flower. That is the strong image, and why they are very much connected with bodhisattvas is because they have their roots in the mud but are unstained by the mud. In the same way, a bodhisattva appears in our samsaric realm but is not overwhelmed by the pollution: the mental pollution and degenerations of our samsaric realm. When you think of the uptala flower, the lotus flower, you can add those symbolisms to it. Think of the determination, strength, and discipline to grow out of the mud and be unstained in the mud, and yet to be able to be of benefit to all the other sentient beings. Yes, take that kind of meaning and symbolism into the visualization when you do it. If you have different meanings that you might give to some of Tara’s attributes, I don’t think there is any harm in doing that. You might have your own personal associations.

For example: Tara has anklets. Many years ago, before I became a Buddhist, I went to India and I came back wearing anklets—the kind that jangle when you are walking like the Indian women wear. That kind of completed my whole outfit with my brightly colored skirt, long hair and earrings, the whole thing. For me, thinking of Tara wearing anklets is just like, “I am giving up all of that with great happiness. I am tired of creating an image in front of other people. Whether it is that image or another image, I am tired of creating it.” For me personally, the anklets could represent that.

I remember I was wearing the anklets and I went on my first teaching job (I was a teacher before I became a nun) and it was at an inner city school. I came in (wearing the anklets all the time) and it was a fifth grade class. The kids are (saying,) “What is this teacher doing? She jangles all time.” I thought they would see it as kind of cool. They didn’t. They thought it was weird. So, you may have certain associations with (perhaps) Tara’s posture or her ornaments, or different things like that, so you can add that to the meditation.