Verse 104: The most amazing drama

Verse 104: The most amazing drama

What is the most amazing drama to be seen even in dreams?
The scenes that appear to the senses that should be understood as illusions.

Our previous verse was talking about the perfection of wisdom in meditative stabilization, in your actual meditation session when you’re analyzing and determining how things exist. Then when you come out of your meditation you try not to just go back to normal old way, but you have to really try and integrate what you learned in the meditation throughout the day.

If you have no understanding of emptiness when you come out of your meditation session you don’t even think about it afterwards. It takes time to really develop some understanding.

When you have some understanding of emptiness, to the degree that you have an understanding, then when you come out of the meditation things don’t appear quite so solid.

They say that when you have attained an inferential realization of emptiness, beginning at that point when you come out of your meditation then things appear to you as like illusions in the sense that an illusion (or a dream as mentioned here) things in a dream, things in an illusion appear to be quite real when you’re in the dream, or when you’re experiencing the illusion, but they aren’t. They don’t exist as they appear at that time.

So the mind is very easily deceived by thinking that things exist as they appear when we’re dreaming or when there’s an illusion, but then when we kind of wake up and realize how things actually exist we see that there’s something there but it doesn’t exist the way it appears.

The same thing is just with the normal way our senses function is things appear objective, out there—there’s this objective world out there that we’re trying to deal with, and yet after we meditate on emptiness we realize that it’s not an objective world there, it’s like an illusion in that it appears objectively but it doesn’t exist that way.

Another good example that they use in the texts is like a reflection in a mirror. When you look in a mirror you see that face, and that face looks so real. And if you’re a young baby or if you’re a little kitten you see the reflection in the mirror and the baby wants to play with the baby, and the kitten wants to play with the kitten, they think it’s real, they don’t realize that it’s not like that. So although there’s no real face in the mirror (or no real kitten in the mirror) there is a reflection and an appearance, and that reflection and that appearance can still function. So it’s not a real face, but it’s not like there’s nothing there. Because you can use the reflection of the face to brush your teeth and paint your face and squeeze your zits and everything else like that. [laughter] Even though it’s not an actual face.

So in the same way, although things appear to us to exist separate from the consciousness, intrinsically existing out there as things that we just happen to bump into, and thinking that our perception of them is real and true, to see that actually things don’t inherently exist like that, they aren’t an objective reality cut off from the mindstream. However, they still exist.

So things exist, because we say we’re all here, and we say I do this and you do that. So things exist. But they’re not out there objective. They’re related to our consciousness in some way. According to the Prasangika viewpoint they way they’re related to our consciousness is that we conceive them and give them a name, and in that way we relate to them.

But the thing is we forget that we’re the ones who conceived them and gave them the name, and instead we think that they have their own identity out there independent, but themselves.

So, coming out of the meditative equipoise in which you see the emptiness of all that projected stuff we’ve put on things, when you come out of that meditative equipoise there’s still the appearance of inherent existence but the bodhisattvas at that point (or the hearers who have entered the vehicle) they don’t grasp those appearances as real. By not seeing those things as so real then there’s much more spaciousness in the mind.

Which is nice, because you can see right now how tight our mind gets. Anybody’s here mind get tight? And why does our mind get tight? Because we believe what we’re thinking. And we also believe that what our senses tell us is an objective truth. Because we have these beliefs like that, that are so narrow, then of course we get all tangled up in how we see things. Because we’re putting a way of existence onto them that they don’t have and then what do we do? We have to fight with what we created.

A very easy example is if…. This is what we do in thought training, it’s an easy way to understand it. Somebody criticizes you. If you label that person “enemy”—they criticized me, therefore they’re an enemy—then every time you see that person your mind is unhappy and suspicious, and you’re defensive even though the person’s just walked in the room, and that’s simply because we gave the label “enemy” and then forgot that we were the ones that gave that label. Whereas, according to the thought training teachings, if somebody criticizes you, you say that person’s helping me, they’re a kind sentient being for showing me the things that I need to work on, for helping me purify my negativities. So you label that person “a kind sentient being.” Then whenever they come into the room you say there’s that kind sentient being who may help me learn about my faults and what I need to improve on, and I’m really grateful to that person. And then when you see that person you’re not all like frozen and fearful because you have a different conception and gave them a different label.

Our mind is so powerful in just how it conceives something and what it labels it, and how that creates our experience. So really seeing that things don’t exist as they appear, and that they exist merely nominally, gives us a whole lot of mental space.

That’s the illusion-like meditation that this verse is referring to here. 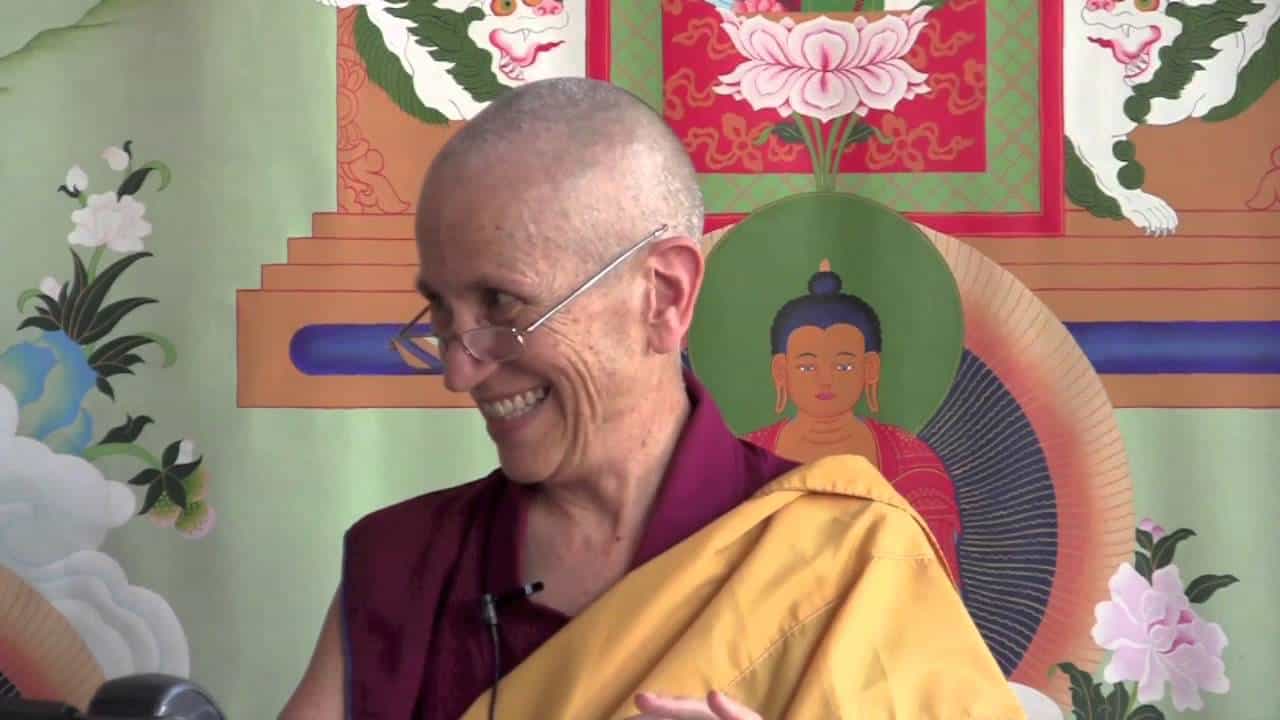 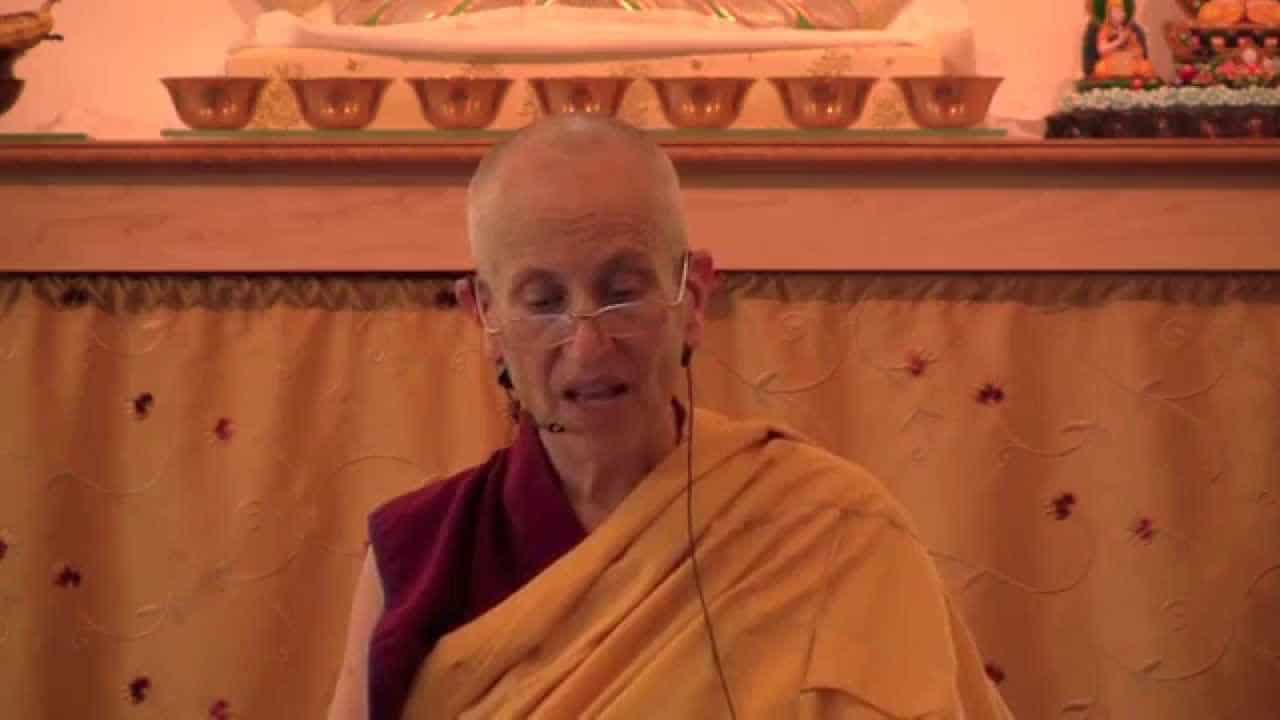