Verse 52: The antidote to apathy

Verse 52: The antidote to apathy

“What is it that makes one lose everything one ever wanted?”

What is it that makes one lose everything one ever wanted?
Dissipating apathy that fails to persist in any task.

Dissipating apathy that fails to persist in any task…. So, I think I’m done with the talk now. You guys can just figure it out by yourselves, I don’t care. [laughter]

Dissipating apathy—we just don’t care. And so it’s interesting because it says, “What is it that makes one lose everything one ever wanted?” Why does apathy make us lose whatever we ever wanted? Because to get what we wanted—in a worldly way or especially in a Dharma way—we have to exert effort. We have to exert energy. Apathy is the opposite of exerting energy. Apathy is a kind of laziness. And in particular, apathy is, “Well, I just don’t care. I don’t care that much. I’m not going to try.”

For example, today I wasn’t prepared for Jeffrey’s teaching. So I got in there, I didn’t even know where we were, and I’m looking over Venerable Tarpa’s shoulder, where are we, what’s he talking about? And at that point I could have just said, “I’m not prepared, I don’t know where we are, I don’t know what he’s talking about, forget it, just sit here.” But I didn’t. I said to myself, “I’m not prepared, therefore I have to listen especially attentively and take really good notes, because I’m not likely to understand what he says because I didn’t read ahead.” So I took more notes than usual and tried to pay better attention because I wasn’t prepared. Instead of just saying, “I don’t know what he’s talking about so forget it.”

But we often do that with apathy, don’t we? We don’t give ourselves a chance to actualize our own dreams and our own wishes. We just say, “I can’t do it, it’s too hard, I’m too stupid, I don’t understand, it doesn’t matter anyway, so I’m just going to sit here.” And that’s what we do, isn’t it?

We become our own worst enemy with that apathetic mind state. We’re shooting ourselves in the foot all the time. Because we have the potential, we have the power to do something, but we don’t do it. Instead we tell ourselves we can’t. And then we just sit and feel sorry for ourselves and sulk and complain that the world’s unfair. And then wonder why we’re so unhappy.

True or not true? It’s interesting, isn’t it, how that kind of apathy really leads to a lot of unhappiness. It becomes very, very self-defeating. Having joyous effort is the opposite of this apathy and laziness, and so it’s really important that we have joyous effort.

There are four steps to joyous effort. Joy, aspiration, mindfulness, and pliancy.

So, practice cultivating joy, aspiration, mindfulness, and pliancy or flexibility.

It’s like, you go to work at a job, and you’re like, “Oh, I don’t like this job, and this is wrong, that’s wrong, ugh.” But you go to work every day because you see the benefits of it. So how come when it comes to Dharma practice we give up on ourselves? Even though Dharma practice has so many more benefits than going to work. So we need to see those benefits and see the good conditions we have, and apply ourselves with mindfulness, and learn to be flexible and pliant.

Having said that, I’m now exhausted. I don’t want to do anything for the rest of the day. [laughter]

I was just thinking that regarding apathy, sometimes we don’t even start something because we look at it and we say, “That’s too big.” And that would be like looking at our forest—240 acres, the forest really needs to be cared for—and saying, “Oh, there are 240 acres, it’s too big, let’s just forget it.” And just leave it all with all this debris and overcrowding, and who cares. But we don’t do that, do we? We do a little bit every year. And slowly it’s getting there. You can see that. I mean, just the thing of you do a little bit every year and you stay on track, and then things go forward.

[In response to audience] I think first you get discouraged and then you get apathetic. You get discouraged: “Oh, I’m incapable.” So something’s wrong with us. Or: the path is too hard. “Oh, bodhisattva path, too difficult, I can’t do that.” Or: the result is too high and unattainable. “Oh, buddhahood, hah.” And so we discourage ourselves by our own way of thinking; and then having gotten discouraged, we say, “Well, why try? Why do anything? I’ll just sit here.”

[In response to audience] It’s true, most people don’t remove their afflictions because of lack of interest. Because we don’t see the benefits of eliminating our afflictions. It’s like a person who’s sick who just gets so used to being sick that they forget the state of wellness exists and they forget what feeling well felt like so they don’t even try to get well. So we’re so used to our afflictions that we just accept them and feel defeated and don’t even try. We’re not interested. Too hard. Let science develop some pill, then I’ll take the pill.

[In response to audience] Yes, I was wondering if this one that he put in here was a different list…. But yes, steadfastness and then rest. Steadfastness is continuing on, doing what you can do as you’re able to do it without giving up. And then rest is, when you’ve completed something, give yourself a pat on the back, rest, so you can engage in the next thing full of energy. Instead of this constant push, push, push….

Sometimes in the middle of doing something you need to take a rest so you can continue with it. So you do that, but then that’s where steadfastness comes in, you’re taking a temporary rest but you steadfastly continue going in that direction.

[In response to audience] Yes, sometimes we have a hard time knowing we need to rest. Recognizing it. It’s a hard thing to be a balanced human being. Because sometimes we need to rest, and we don’t notice it, or we notice it and we refuse to do it. Other times we need to really become more active and renew our energy, but we say, “I’m too tired to do that,” and so then we don’t try. So knowing when we need to do what is a talent that requires a lot of trial and error. But it’s a really good talent to learn. How do I learn how to be a balanced person? 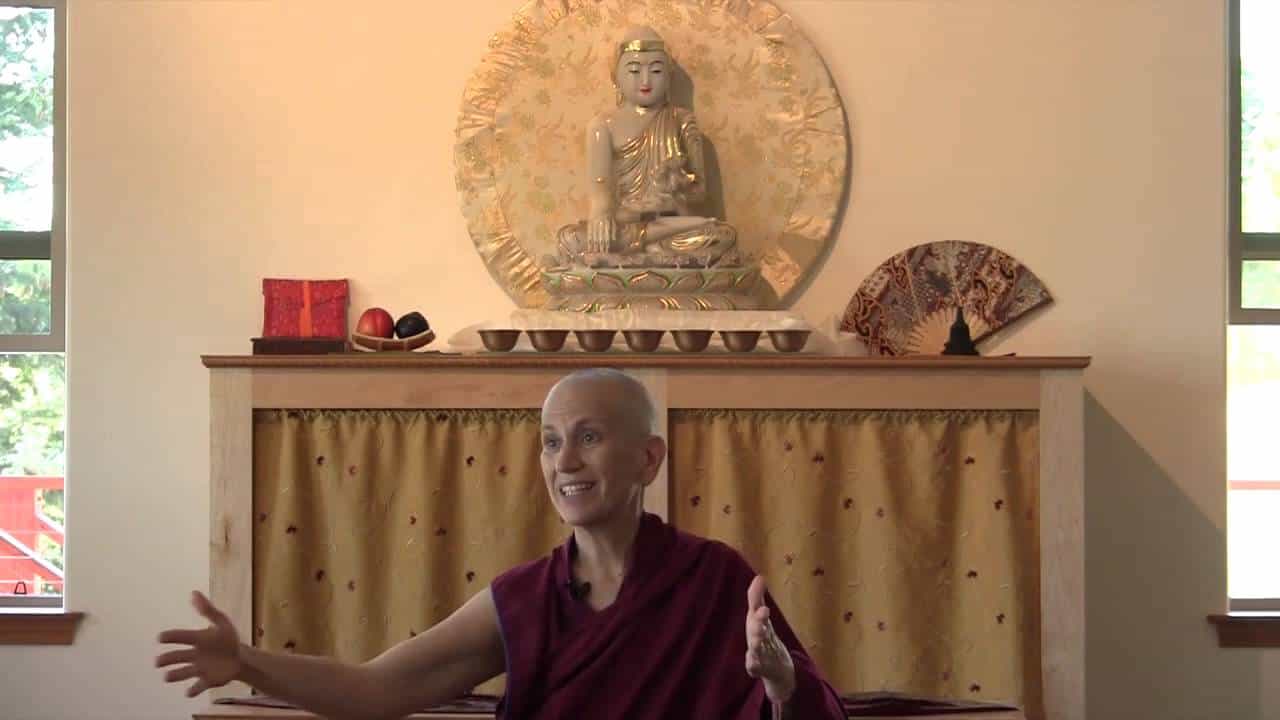 Verse 51: Destroying the garden of happiness 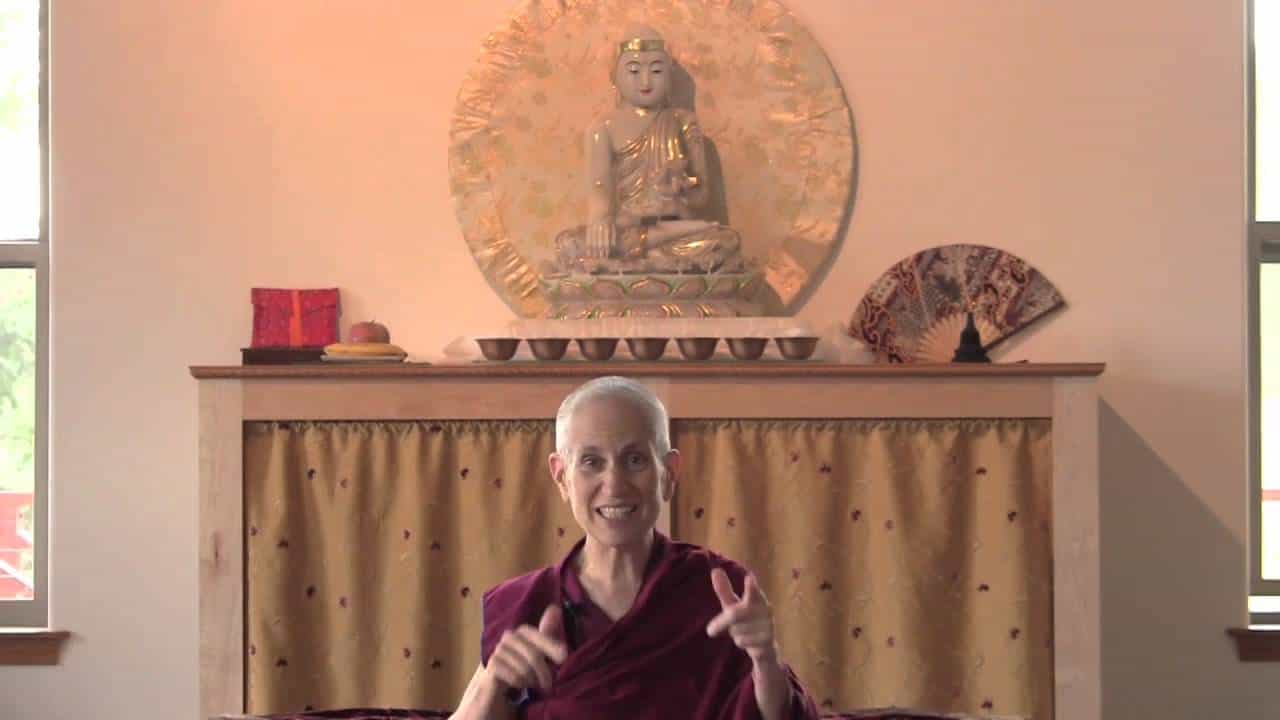