Verse 40: The one who infects others’ minds

Verse 40: The one who infects others’ minds

Verse 40: “Who most infect the minds of all the people they meet?”

“Those with harmful intent, but with soft and cunning words.”

Who most infect the minds of all the people they meet?
Those with harmful intent, but with soft and cunning words.

We can put ourselves on both sides of this situation. Not just on one.

We usually think they infected my mind with their soft and cunning words. But if that happens don’t we have some responsibility? Isn’t it us that is naive and not thinking clearly, not assessing situations properly? Because often, when we are attached to someone or something we project goodness on them, and then whatever they say, whatever they do, we don’t use any discriminating wisdom. Because we want so badly to love them or be loved by them that we take anything they say as the truth. So we leave ourselves open to other people’s soft and cunning words. And the real culprit is our own attachment. Isn’t it?

And we can see this. When we’re attached to someone or something, boy, I mean, we lose our discriminating wisdom because we want so badly for something to be a certain way that our mind just makes it that way … until it falls apart and we realize it was never that way to start with.

That’s when we’re on one side of the “soft and cunning words.” The other side is when sweet innocent me speaks in a way that…. “I really didn’t mean that, you misinterpreted it.” [Whispers] “But I really did mean it.” Do you know what I mean?

Or sometimes we are aware of our motivation, but we’re out to get something for ourselves. Or to teach somebody a lesson, for their own benefit. Right? Out of compassion. We do that so much, don’t we? So, on both sides of the situation, whether we’re the one being deceived, or whether we’re the one deceiving…. On both sides, we have some responsibility.

And the thing about this is that when we accept our responsibility—no matter which side we’re on—then it’s possible to (at least in our own minds) resolve the situation with the other person, and put it down. Whereas when we don’t accept responsibility and we constantly project it onto other people…. “Look what they did to me. They manipulated me. They deceived me. They used soft and cunning words.” Or “They should have called me on what I was doing. Yes, sure, I had a bad intention, but that’s their responsibility to call me. So they fed my bad intention!” In other words, I have no responsibility for my own bad intention. Somebody else should have stopped it. Right? You see what I’m getting at? You know, always blame blame blame and I’m sweet innocent me. Which always puts us in the position of never being able to resolve anything. Whereas when we’re able to own our own responsibility—and I’m not talking here about blaming ourselves or assuming responsibility for things we’re not responsible for, but for clearly seeing situations and accepting responsibility—then we can clear things up and we can go forward in our lives with a clear heart and a clear mind, and having learned something from the situation.

“Well, maybe…. But you don’t know what that person did to me….” [laughter]

But maybe some people know what we did to them.

[In response to audience] Right, so where does trust fit in? Because we don’t want to walk around paranoid, suspicious, not engaging with anybody.

Learning to trust people in the right amount is a balancing act and a skill. And it’s hard to get to the right amount because our minds often don’t see things clearly. So when we’re attached to somebody we trust them too much. Because we’re wanting something to be a certain way. Sometimes out of ignorance we trust somebody in an area where they’re not trustworthy. So we have to figure out. Because some people are trustworthy in one area, but not in another area. So it’s not that somebody is totally untrustworthy. Usually that’s not the case. But in one area you can trust them and in another area you can’t. And so our thing is to be able to assess in what areas of life certain people can bear our trust, and in what areas they’re not able to bear our trust.

It’s a rare person who we can trust in absolutely everything. I mean, you want to say “I trust my Dharma teacher with everything.” But if your Dharma teacher doesn’t know how to fly a plane, would you trust them to be the pilot of the plane that you’re flying in? No. So that doesn’t mean they’re totally untrustworthy. Whereas the pilot…. You may trust them to fly the plane, but you wouldn’t trust them to lead you on the path to awakening. So to figure out in what areas we can trust. And it’s hard to do that. We often get it wrong. And often different circumstances come up that we weren’t aware of, or that weren’t planned or expected.

[In response to audience] Well, you know, we say somebody “betrayed us” often when we had unreasonable expectations. And so sometimes we may expect something of someone that they never agreed to. Or sometimes they may even have agreed to it, however, their ability to assess their own behavior is not always perfect.

For example, you might be in a very close relationship with somebody, and somebody says, “I will never criticize you. Ever ever ever.” And you believe that. And you trust that. That’s kind of an unreasonable expectation, don’t you think? I mean, we would love it in a very close relationship to believe it when somebody says, “I will never criticize you. I will always support you.” But hey, this person is a sentient being. Their mind is under the influence of ignorance, anger, and attachment. Even if they say they’re never going to criticize us, are they going to be able to do that? Doubtful. And yet, we kind of, due to attachment in that situation, then kind of gloss over things.

[In response to audience] Very true. When we make trust concrete, like friend, enemy and stranger, and then it’s all or nothing. I mean, that’s due again…. We’re clinging, we want so desperately for something to be a certain way. And this is…. Life knocks us around in a lot of ways about this. For sure. We’re all going to get knocked around. And then sometimes it’s only in retrospect that we look back and we go, “Oh, my expectations were incorrect.” Even if that person said that they would do that, I expected them to never have a negative thought and go back on what they said. But you know, sentient beings have negative thoughts.

I mean, even if the Buddha was in front of us, as time went on I’m sure we would find something to say the Buddha didn’t live up to my expectations. The Buddha betrayed my trust. But it’s not because of the Buddha. It’s because of us.

This is sometimes quite painful in our lives. But I think…. At least what’s happened to me is, when I’m able to see my part in it then the pain goes away. Because then I know, okay, I can do something about this. 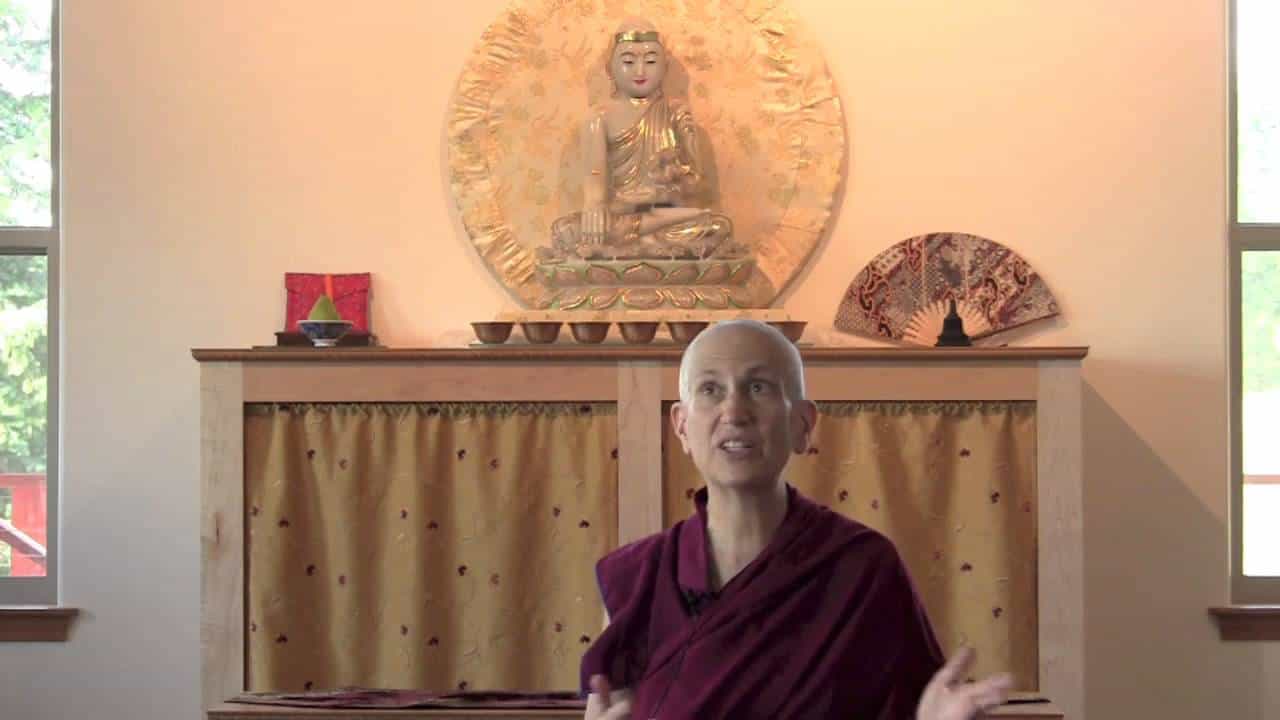 Verse 39: The poorest of all beings 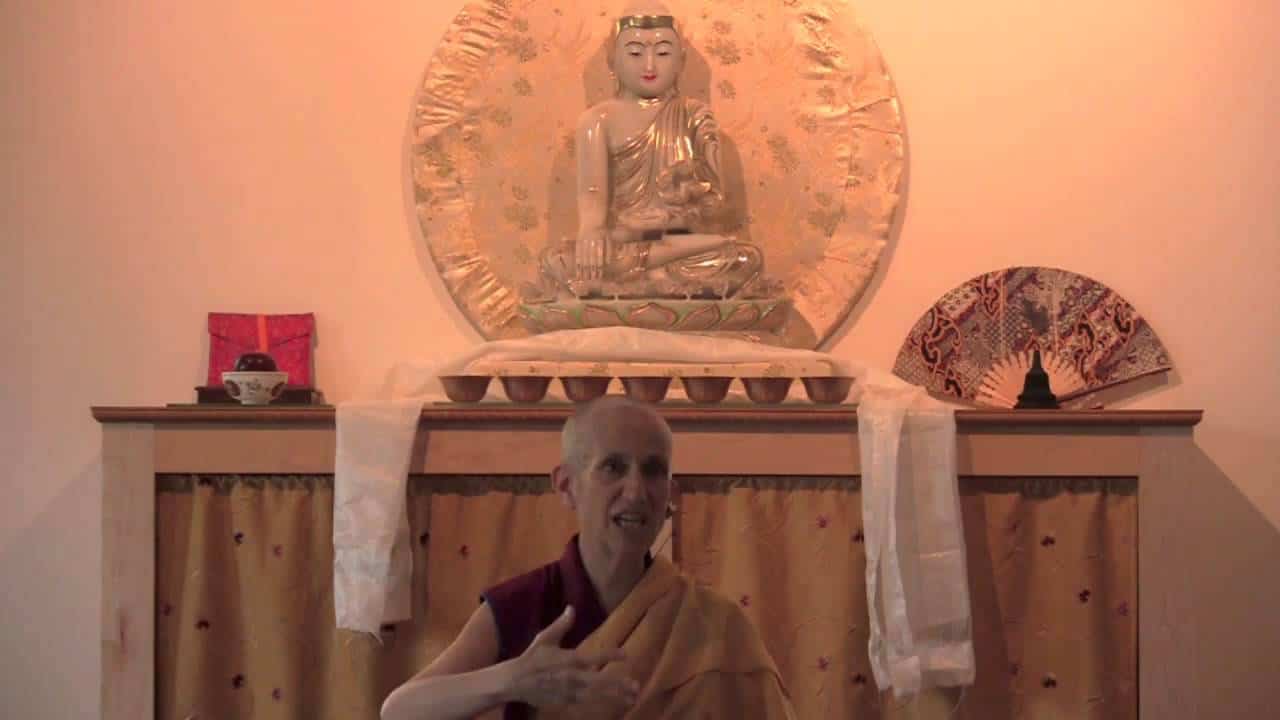