Yesterday we were talking about corrupt bosses, right? “The evil spirit that devours others even when they’re not hungry. People in power who abuse those under them and consider them as worthless as grass.” Considering whoever you have power over as simply being your servants and it’s up to you to boss them around and tell them what to do and so on, really abusing power that way.

Then Verse 21 talks about the situation from the person who is the employee or the child or the disciple or whatever. And it says:

Who lives in the hell realms while appearing in the world of human beings?
The person who works and toils under a corrupt executive or boss.

This is looking at it from the viewpoint of the person who is exploited or who is abused. And I think what the Dalai Lama is pointing out here is that—well, clearly when you’re being exploited or abused you live in hell. But you also have the power to do something about it. It may be difficult because you’re in a lower position and so people tend to lack self-confidence and sometimes the world blames the victim and so on. But there still remains the option to leave the situation.

I remember once…. It wasn’t this exact situation, but His Holiness was giving a public talk and somebody wrote the question and said, “I’ve had this job and the boss is really bad and he’s really mean to us and makes us do all these things and I’ve tried doing something about it and I can’t do anything about it, and it’s really awful, and what do I do?” And guess what His Holiness’s answer was? “Quit.”

And sometimes when people come to me with that problem, I tell them and they go, “Ahhh! But I can’t! I can’t quit!” Really? Your boss is nailing you to the—wherever you’re working? I mean, there exists that possibility. It’s just most people don’t want to do that. But then they have to take the responsibility for not doing it. Instead of saying, “I can’t,” say, “I’m choosing not to.”

In this kind of situation, the person who looks like a human being but is in the hell realms. How are they in the hell realms? Well, first of all, in this very life, when you work for somebody who is corrupt or abusive, you’re miserable, aren’t you? I mean that’s kind of right there very clear and evident.

Second of all, when you work for somebody like that, then due to that person’s influence—and often it’s not just hinting it’s directly telling you—you have to do unethical things. Many people come to me and they say…. Well some of them say if you don’t do unethical things how are you going to close the deal? How are you going to make any money? So this is seeing it from the viewpoint of the boss.

I had a friend who was an executive in Levi Strauss in Hong Kong and she said when you act unethically actually it hurts your business because the people find out and they don’t trust you and they don’t come back. Whereas if you act ethically and you treat people fairly people will come back and in the end it’s good for your business. So, the boss has that choice to make.

But sometimes people come to me and say, “Well my boss didn’t say in so many words that I have to lie but that was the message. What do I do?” I usually say think about whether you want to continue at that job or not. And some people really freak out.

I’m not quite sure what kind of answer they’re wanting from me when they ask that question. I think they’re wanting me to give some solution that will make their boss change. How can I do that? If you’re boss is like that…. Okay, maybe you have a relationship with your boss where you go and talk to them and say look, this isn’t boding well for the company and everything, and maybe your boss would listen. But usually those same people who ask that question don’t want to go to the boss and say anything. They want some kind of magical something that I’m going to say that can make it all go away? Which of course I don’t know what to do. So I usually say really consider whether you want to stay in that kind of position if somebody is telling you to act unethically. Or if somebody is abusing you, or if somebody is sexually harassing you. You don’t have to stay there. There are things you can do. Sometimes the things you do may bring you consequences you may not want. But then you have to choose. Which set of results do you want?

Because I think if you let yourself go along with working under somebody who is really corrupt and unethical, in the long run you wind up creating so much destructive karma that’s going to bring the result of a lower rebirth. And if the government finds out in this life, and you get arrested, are you going to blame it all on your boss? And the government is going to say, “Really? You didn’t do anything?” When you did do something because you went along with it. So I think people have to think.

And personally speaking, I think being able to live with yourself at the end of the day is the most important thing. The money you make—the money comes, the money goes. But if you can’t live with yourself because you don’t like what you’re doing to other people through your job, then no amount of money can ever relieve that internal unhappiness from you. So I think we have to think carefully of that kind of thing.

[In response to audience] Yes, it’s fear of the unknown: If I say something there might be a worse situation. But there could be a better situation.

I read a story about one psychological test where they did some kind of game where somebody would actually score better if they eliminated some of the bad choices. But because they didn’t want to eliminate any possible choices, and make any kind of commitment, they actually scored lower.

We see that sometimes we do that in our lives. We won’t make a decision—which IS making a decision—and meanwhile, things are happening. But we’re so afraid of closing doors that we keep everything open, and then everything remains in this state of personal confusion because we can’t get anywhere.

I think when we’re afflicted with that kind of mental state we really need to see, first of all….

First of all, what we want is not possible.

What we’re wanting is to be able to choose this decision and after some time, if it doesn’t bring what we want, we want to go backwards in time to the initial point and then choose another way. Or we want to keep doing this and choose five ways so we get experience of all five, always going back in time, and then come back to the original moment of time and then choose amongst the five which one we’re going to take because now we know what the outcomes of all five are.

Is that possible? No.

I was telling that to somebody just in the last few days—because of the consecration—that I made some big mistakes before starting the Abbey. And it was only because I made those mistakes that I finally broke through some internal weaknesses of myself that enabled me to go forward and start the Abbey.

I made the mistakes and I learned from them. And without having made those mistakes I don’t know if I ever would have learned those things.

[In response to audience] But see, the thing is in the structure where people only relate to the person here [at the top], then they cannot get support from their colleagues. Because they don’t trust their colleagues. They only trust the big person. They could, if they were smart, get support from their colleagues. And many people do that and then go to the abusive person and say look, we’ve all noticed this going on and etc. But sometimes people are, because of their own way of thinking, they limit themselves. And oh, this person [at the top] is the Buddha, or this person is this and I only listen to them. In which case they won’t talk to their colleagues. Because their colleagues become competition for the attention of the big person. That happens in many organizations. And it’s a mess when it does. 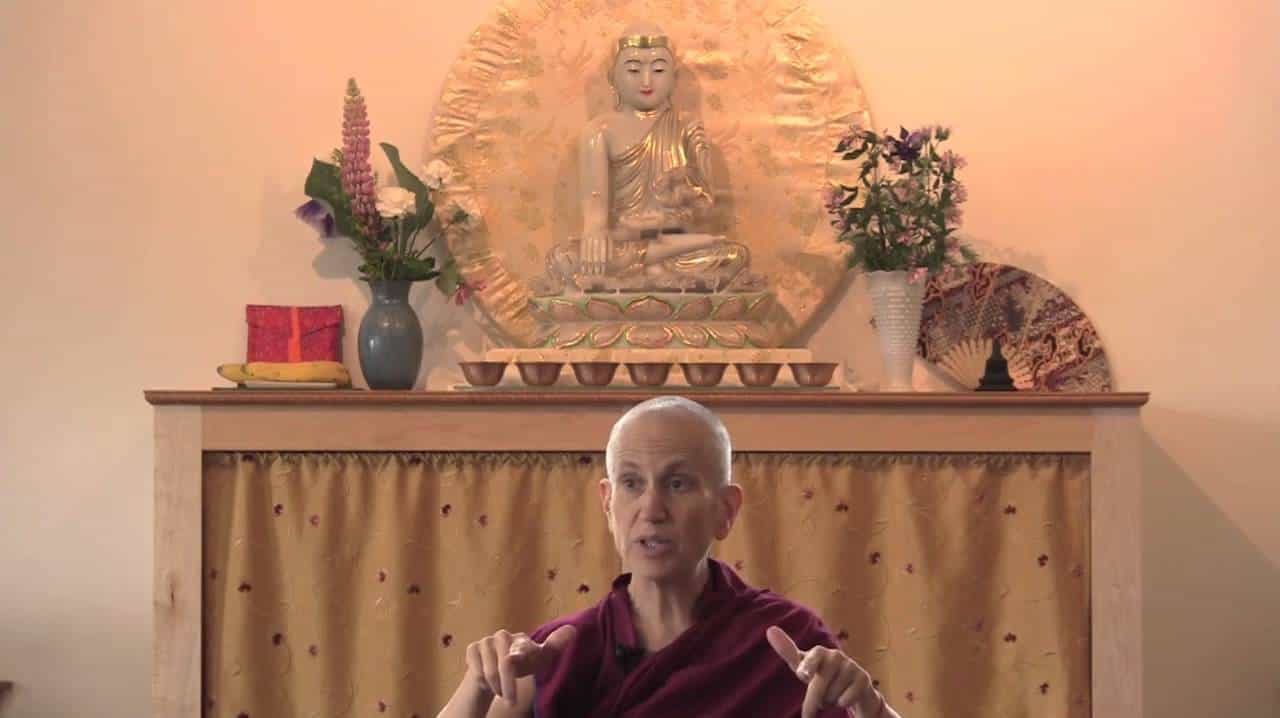 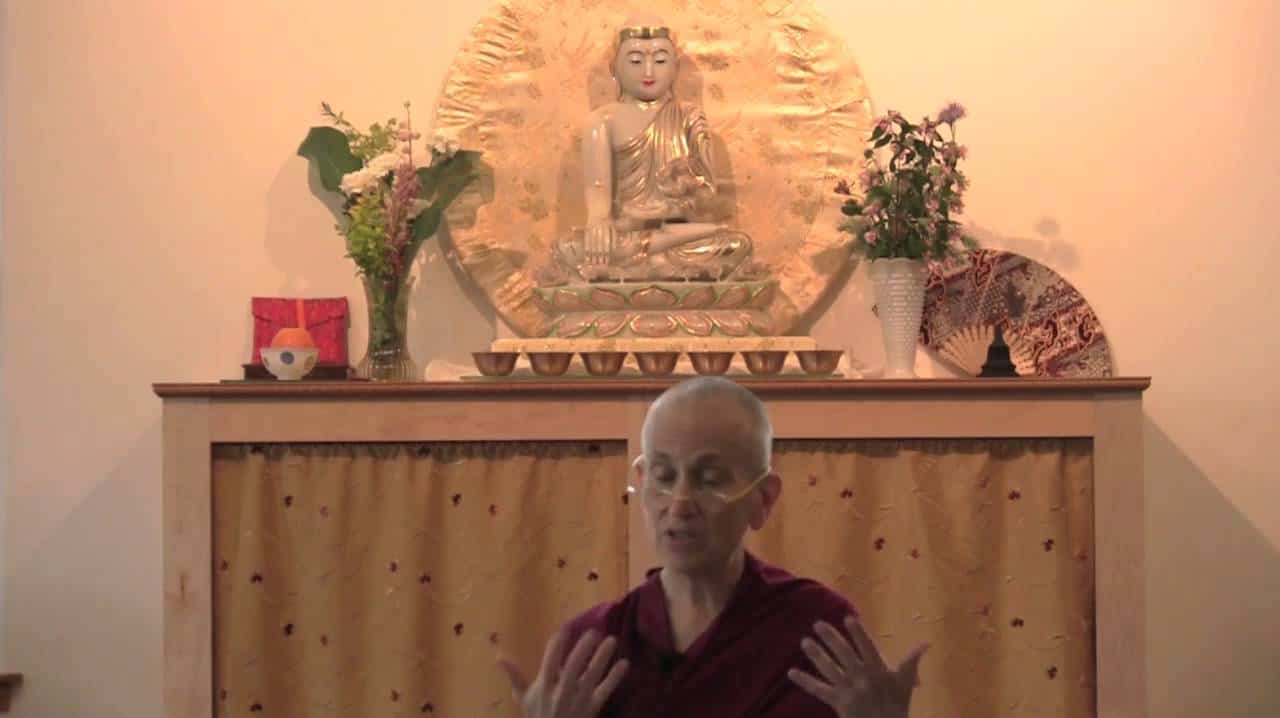