Pacifying the demon of doubt

Pacifying the demon of doubt

We have another really good question here. It starts out, “I’m struggling with the demon of doubt.” I think a few people probably would’ve said that. So, the first part of it is, “How are the Buddhas helping all sentient beings especially if these sentient beings are not Buddhist?”

The Buddhas when they help sentient beings don’t necessarily have to appear as Buddhas. They can manifest in whatever form is most effective in communicating with somebody. If you look at the example of your life, most of us here were probably not born in a Buddhist family and yet somehow we met the Dharma. So, didn’t the Buddha help us? In some way? Hasn’t the Dharma and the Sangha helped us already, even when we weren’t Buddhist, to be able to meet these teachings and practice them?

The other part is saying she gets snagged on the aversion with, “This religion is the only way to be enlightened.”

Now, who said that? First of all, the Buddha didn’t intend to even found a religion. He just shared what he knew. He had no idea to start a religion, and he certainly had no idea that people would go around saying, “This is the one way to get to enlightenment or else.” That’s certainly not the Buddhist way. Any path that teaches us renunciation from cyclic existence, that tells us how to develop the bodhicitta, and that has the correct view of the nature of reality, no matter what you call that path, is a path that can us lead us to enlightenment. If something doesn’t teach renunciation but teaches you to really delve into all your sense pleasures and be attached to cyclic existence, if something teaches you to not have love and compassion for sentient beings but to just take care of yourself, and if something has the wrong view of the nature of reality, then those paths are not going to lead us to enlightenment, no matter who taught them. You have to look at what is it, what are the realizations we need to gain, and what path teaches us those realizations. It’s not a thing of saying this religion is the one and only religion.

[The question continues]: “I know other teachers have said we need to believe unknowable things that the Buddha taught, such as the wisdom of the rest of the teachings such as the four noble truths. But some of it is hard to accept.”

If a certain topic is puzzling then try and ask questions about it. Do some reading about it. Listen to some teachings on it, discuss it with other people. We especially need to discuss things with other people. You get new perspectives and new ways of looking at things. When you listen or read teachings, you get new information you didn’t have. Then you think about things based on all of that.

If it still doesn’t make a whole lot of sense just put it on the back burner for the time being and come back to it later. You don’t need to make yourself believe anything that doesn’t feel right to you. That’s very important because we really want to follow a path due to understanding, not due to threats or fear of what’s going to happen if we don’t believe. That takes all the joy out of a spiritual practice, doesn’t it?

When we have understanding then our faith is based on conviction that we’ve developed ourselves, and then it’s not undiscriminating faith. It’s faith that is developed through understanding that’s the best kind of faith because it’s going to be stable. Then if somebody else comes up to you and says, “What you believe is a bunch of hogwash, blah, blah.” It doesn’t upset your mind and cause you to have doubts for you’ve really thought about things deeply. You know why you believe what you believe. Even if somebody says something, you can think about it. It usually, at least for me, very much reinforces what I already know and deepens my understanding of it. Try and look at things in that way.

I had plenty of people telling me I was nuts. Well, that happened before I was a Buddhist, but especially after! [laughter] 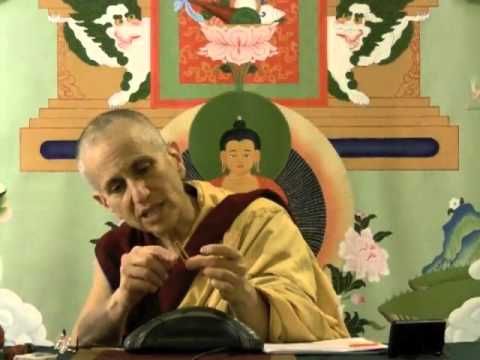