I bow down to the venerable spiritual mentors.

I will explain, as well as I am able, the essence of all the teachings of the Conqueror, the path praised by the Conquerors and their spiritual children, the entrance for the fortunate ones who desire liberation. 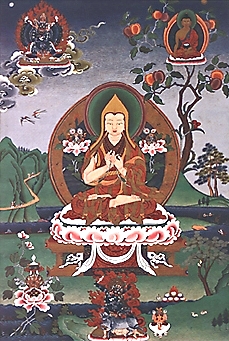 Listen with clear minds, you fortunate ones who direct your minds to the path pleasing to the Buddha and strive to make good use of freedom and fortune without being attached to the joys of cyclic existence.

By contemplating in this way, do not generate even for an instant the wish for the pleasures of cyclic existence. When you have, day and night unceasingly, the mind aspiring for liberation, then you have generated the determination to be free.

However, if your determination to be free is not sustained by the altruistic intention (bodhicitta), it does not become the cause for the perfect bliss of unsurpassed awakening. Therefore, the intelligent generate the supreme thought of awakening.

Swept by the current of the four powerful rivers,1 tied by the strong bonds of karma which are so hard to undo, caught in the iron net of self-grasping egoism, completely enveloped by the darkness of ignorance.

Born and reborn in boundless cyclic existence, unceasingly tormented by the three sufferings2—by thinking of all mother sentient beings in this condition, generate the supreme altruistic intention.

Even if you meditate upon the determination to be free and the altruistic intention, without the wisdom realizing the ultimate nature, you cannot cut the root of cyclic existence. Therefore, strive for the means to realize dependent arising.

One who sees the infallible cause and effect of all phenomena in cyclic existence and beyond and destroys all false perceptions (of their inherent existence) has entered the path which pleases the Buddha.

Appearances are infallible dependent arisings; emptiness is free of assertions (of inherent existence or non-existence). As long as these two understandings are seen as separate, one has not yet realized the intent of the Buddha.

When these two realizations are simultaneous and concurrent, from the mere sight of infallible dependent arising comes definite knowledge which completely destroys all modes of mental grasping. At that time, the analysis of the profound view is complete.

In this way, when you have realized the exact points of the three principal aspects of the path, by depending on solitude, generate the power of joyous effort and quickly accomplish the final goal, my spiritual child!

The Three Principal Aspects of the Path