Other perspectives from listeners

A three-part series on how to work with disturbing emotions after mass violence. These talks were given after the back-to-back shootings that occurred at the screening of a Batman movie in Aurora, Colorado on July 20, 2012 and at a Sikh temple in Oak Creek, Wisconsin on August 5, 2012.

So some people who watched the previous two Bodhisattva’s Breakfast Corner talks about the mass shootings wrote in with some comments. So I thought I would read a couple of the comments that people made. There were several people who thanked me, so I don’t need to read those. [laughter] But there are some other people who presented some other perspectives that I thought were interesting.

So one person said: “I feel that meditating on emptiness is the most effective cure. My feeling is that one needs to view mass shootings like one sees all contaminated phenomena. One may remind oneself about causes and conditions that lead to premature violent death and one may look at mass shootings as a reminder that that our precious life is easily lost and that one should liberate oneself from cyclic existence for the benefit of the others sooner rather than later.”

The three principal aspects of the path

Okay? So this person is taking it into the three principal aspects of the path.

So if you see it in terms of renunciation, then we see the shootings as indicative of impermanence, and that our precious human life is easily lost. And that while we have this opportunity to create virtue we definitely should, and not create non-virtue. And then beyond that just to get out of cyclic existence altogether because what’s the sense of going up and down on the merry-go-round in all of the different realms of existence where you could meet this kind of suffering over and over and over again, and even be on any side or any role in this kind of situation. So let’s get out of samsara altogether.

And then of course, seeing it to instigate our practice of bodhicitta. So renouncing samsara not only for ourselves but for everybody else, and let’s get everybody else off the merry-go-round so nobody has to be in these kinds of violent situations, on any end.

And then she also brought up the third principal aspect of the path, emptiness. And if we’re able to look at these situations as dependent arisings, dependent on many, many different factors, and not take them as concrete things that we overlay with a kind of meaning and mode of existence that they don’t have.

That’s rather difficult in this kind of situation. You know? Because violent situations like this are ones where we see in an extremely concrete way. And the idea, “Well how would I even begin to see this situation as empty of inherent existence? I don’t even begin that.” And then, “If I see it as empty then am I just going to become totally apathetic, and say, “Well, it’s all empty so there’s no inherent existence, so what to do?” And you don’t want to become apathetic and misunderstand emptiness and use it as an excuse for apathy. So it really requires some thinking about.

Dissecting a situation into its parts

But, as with any situation, to be able to look at it, and, if we dissect it into different parts and different pieces and different factors then we can see that it’s something that isn’t one, solid event, that there were many multiple causes and conditions coming from all over — some from this life, some from previous lives. Many different people’s karma, many different situations in this life. And when you really look at it it isn’t just one solid thing. It’s like each person in that theater—or in the Sikh temple—had their own experience. And each person came out of it in a different way. And so rather than us putting one concrete vision on top of it, to see well wait a minute, you can look at it from a variety of perspectives. There were lots of things going on there. It wasn’t something fated or predetermined or concrete that could never be changed. It’s something that is dependent. It doesn’t exist on its own. And so to begin to … especially what we want to do is loosen whatever very heavy, concrete emotional reaction we have towards it.

Then another person wrote in—I love these kinds of very dramatic, simplistic situations: “If someone walks up to me and shoots me dead and my last thoughts were ‘Oh nuts, that guy’s got a gun. Don’t shoot me. Don’t shoot me. I don’t want to die,’ what are the consequences for my next rebirth?”

Okay, let’s leave aside the … because I had the image of you just walking on the street and somebody walks up and goes BANG! I don’t think he means it like this.

So, our last thoughts do impact our next rebirth in the sense that what we’re thinking is likely to make different karmas ripen. So if, at the time of death, we’re angry, then it’s going to make (probably) some kind of non-virtuous karma ripen. If, at the time of death, the mind is accepting and calm, takes refuge in the Buddha, Dharma, and Sangha, then there’s going to be a virtuous karma that ripens.

We shouldn’t think it’s just what’s going through your mind at the time you die, because the whole thing is a matter of habit. We die the way we live, don’t we? So if we want to create the cause to have a virtuous thought at the end of our lives, we better start having a lot of virtuous thoughts now. And also, if we want virtuous karma to ripen at the end of our lives, then we need to create some kind of wholesome karma right now. So it isn’t a thing of, you know, wait until the end of your life and “I take refuge” and you know, there you’re saved. It doesn’t work like that. Okay?

So, I think what this person is leading to is the importance of really living a wholesome life moment by moment while we’re alive so that we’re constantly planting good seeds in our own minds, and constantly cultivating the kind of qualities that we want to grow in ourselves. And then if we do that, at the time of death there’s much more likelihood for that kind of thought to arise. And even if it doesn’t arise naturally, if we’ve done enough Dharma study maybe we’ll have the idea of, “Gee, I should really call up a positive thought at this moment, this is not the time to let my afflictions run rampant.” And so switch the mind into refuge or bodhicitta or an understanding of emptiness at the end of our lives. Because that does impact what karma ripens.

So, I thought these were quite interesting reactions and responses to what we’ve been talking about. 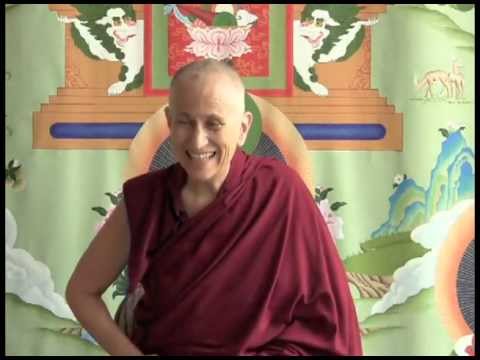 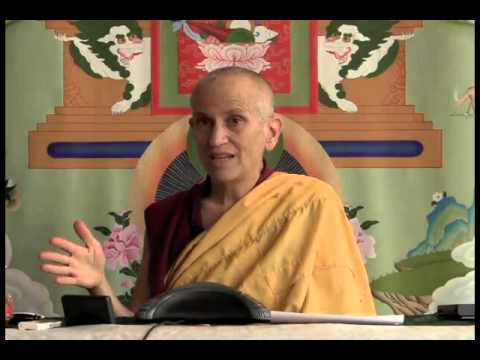