By some good fortune I was invited to attend the second Gethsemani Encounter, a six-day interfaith dialogue between Buddhists and Christians, held at Gethsemani Abbey, Thomas Merton’s monastery in Kentucky. Organized by Monastic Inter-religious Dialogue, a Catholic monastic organization, the dialogue consisted of about twenty Buddhists (Theravada, Zen and Tibetan) and thirty-five Catholics (mostly Benedictine and Trappist, with representatives of a few other orders). His Holiness the Dalai Lama had intended to be present, but was unable to attend due to illness. 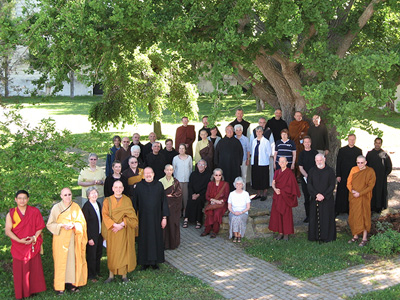 Participants of the second Gethsemani Encounter. (Photo by UrbanDharma.org)

The schedule was full with early morning meditation, two sessions in the morning, a Buddhist ritual, lunch, two afternoon sessions, dinner, and a Christian ritual. Our topic was “Suffering and Its Transformation.” Each session began with a brief summary by a presenter of his or her paper, which all of us had read beforehand. This was followed by an hour of discussion on the topic. We were encouraged to keep our comments brief, so that as many people as possible could contribute to the large group discussion. The formal sessions were only one aspect of the conference; so much valuable interchange occurred in personal discussions during the break times.

The first day the theme was “Suffering Caused by a Sense of Unworthiness and Alienation.” Here we emphasized our personal suffering and how to overcome it. As we were just getting to know each other, the discussion remained somewhat intellectual, although some of the presenters told personal stories. In many cases, the discussion focused on explaining theological or philosophical points of one faith to members of the other.

The second day the ice was broken and people spoke more freely. This day’s topic was “Suffering Caused by Greed and Consumerism,” during which we talked about the challenges facing society as a whole as well as individuals. My paper was on “Spiritual Consumerism,” in which I discussed the potential effect of consumer mentality on both spiritual seekers and teachers in the West.

The third day we focused on “Suffering Caused by Structural Violence,” in which we were asked to examine how our own religious institutions caused suffering as well as how societal structures and laws perpetuated misery and injustice. We talked about the “elephant in the room” that we hadn’t spoken of previously—pedophilia and its institutional cover-up in the Catholic Church. Then, we spoke of “clericalism,” the perpetuation of the values and power of the male elite in both of our religions. Both women and men spoke openly here, without animosity or defensiveness.

The fourth day we dwelt on “Suffering Caused by Sickness and Aging.” Interestingly, in the discussion we spoke of how to help others who were dying and then our different theological views of life after death. In the third sessions, one participant pointed out that we had avoided speaking personally about sickness and aging even though one presenter had led us through such a meditation. At this point, participants opened up and told moving stories from their lives about how their religious practice had helped them to deal with illness and accidents and how those events propelled them to deeper practice.

The Buddhists in the conference were a mix of Asians and Westerners from the Theravada, Zen (Chinese, Korean, and Japanese), and Tibetan traditions, and not everyone knew each other. Thus we decided to get together over two evenings to introduce each other. These introductions were fascinating and very helpful, especially for those who did not know much about other Buddhist traditions or about Buddhist activities in the USA. Those of us “young ones” (I’ve been ordained 25 years) rejoiced at our elders’ practice. Geshe Sopa had been a monk over 60 years and Bhante Gunaratna over 54!

The last day two participants gave summaries and dialogued about their impressions before the conversation was opened to all participants. The goodwill was palpable.

I’m still digesting the experience, but a few points are prominent. First, I was struck by the fact that the Christians continually cited and talked about Jesus’ life whenever they spoke of Christian doctrine. While the Buddha’s life is an example of how the Dharma is to be practiced, we usually discuss the teachings without referring to his life or extensively analyzing what different episodes meant.

Second, I was jolted when Fr. Thomas Keating said that young monastics entering Christian monasteries do rituals, service work, and so forth, but they aren’t taught a practice, a method of meditation for working with their mind. As he was saying this, across the room a young Benedictine monk nodded his head vigorously. This was corroborated by a nun who told of a near-death experience she had and said that she came out of it knowing that she had to find a practice to do. She now does centering prayer, a Christian practice taught by Thomas Keating.

Third, I could feel the faith and the good intentions of the Catholic monastics there. I could also feel the weight of the history of the Catholic Church, the wars it has perpetrated, the cultures in which it has been an imperialistic power, the injustices towards which it has turned a blind eye. I wondered how my Catholic friends felt about that: to what extent did it pain them to see the harm done in the name of God and Jesus? How do they feel being part of that institution?, It took me a long time in my Buddhist practice to figure out that Dharma and Buddhist religious institutions were two separate things. The former is the unstained path to enlightenment, the latter are institutions created by us flawed sentient beings. I could have faith in the Dharma without having to get involved in the politics of Buddhist institutions or defend institutional errors. I wonder how my Catholic monastic friends stand in that regard, where the authenticity of the Church is part of the religious doctrine itself. I also wonder how we Buddhists can learn from the Church’s history and avoid such difficulties ourselves in the future.

Fourth, the Catholic and Buddhist nuns bonded very well. The last day two Catholic sisters suggested we nuns get together over a weekend in a smaller gathering so that we could go into topics of mutual interest in more depth. That would be great!

Fifth, it was unusual for me to be in a gathering where I was one of the youngest participants (I’m 51). The intellectual inquiry, patience, stability, and willingness to learn of those who had been ordained forty or fifty years inspired me.

I haven’t yet heard talk of specific further gatherings, but undoubtedly there will be some. The mutual interest and support was wonderful. The organizers are planning to put out a book with the papers and dialogue from the conference.