Tomorrow is the Miracle Day, it’s the 15th of the first lunar month in the lunar calendar. It’s one of the four great days in the Buddhist year, in which your merit multiplies. I don’t know the math of the merit, the merit math, but some so many million times. It’s very good tomorrow if we really have a very in-depth kind of day of retreat, and quiet, and people doing their sessions, do some extra practices if you can—either prostrations, or mandala offerings, or mantra, do some circumambulation. It’s a day in the Tibetan community when people really do extra practice, and so I’m going to do some extra things.

The reason for this day is that at the time of the Buddha there were some of the matted-hair ascetics who had developed different magical powers. They challenged the Buddha to a contest because the Buddha was getting to be a little bit too famous for their liking, and thought that they would be able to defeat him in the miracle contest. And of course the Buddha… for him those things are unimportant, they’re called worldly super-normal powers. Even somebody without any realization of renunciation or wisdom can have those powers, you get them just by concentration or some people have them just according to karma. The Buddha was not one to accentuate those, or emphasize them, but these people just kept pushing and pushing and pushing. Finally the Buddha consented and of course he outdid them all in his merit, in his display of miracles, and so they converted and became the Buddha’s disciples. And then of course he put them on the right path to enlightenment which is different than having all these kinds of miraculous powers.

Now in Buddhist practice there is a place for developing these powers. For somebody on the bodhisattva path they’re useful for benefiting sentient beings. So bodhisattvas would develop them so that they could know the karma of the various sentient beings that they met. Then they could see if they had the best karmic relationship with them to teach them and lead them, or if somebody else did. They would use them to see what kind of disposition somebody had, what kind of interests. Are they more inclined towards arhatship? More inclined towards the bodhisattva vehicle? Are they somebody who has a nature of devotion and faith, or they’re somebody who likes to analyze things critically? And so you can gain all this kind of information about somebody, and if you have compassion, then with that information you know how best able to benefit that person. It’s in that way that the bodhisattvas develop these kinds of powers.

And so there are different kinds of powers that they can develop. I think in this case the ones with the super-normal powers of like the walking on water, and going under the earth, and flying in the sky, and kind of having fire come out of your body.

But the main thing is your bodhicitta practice. That’s the most important thing. Because even if you have those kinds of powers, if you don’t have bodhicitta, they don’t get put to good use and they could even be used in a harmful way to oneself or to other people. 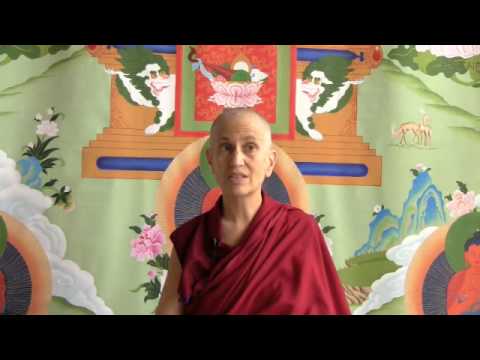 Why we need monasticism