His Holiness once talked about the importance of compassion, altruism, and so forth, and really encouraged people to broaden their mind and see that nobody is inherently evil in any way (or nobody is inherently defective in any way). He told the story about an Israeli who interviewed him before his trip to Israel. Of course the reporter asked about Hitler and the Holocaust. His Holiness was saying, “Hitler’s just like everybody else; he’s not inherently evil. He got that incredible hatred that he had due to certain conditions and causes that arose in his life. But that’s not inherently who he is.” His Holiness said that when he got to Israel, some people were asking, “You don’t think Hitler was bad?” And so, he was laughing because he said, “Oh, in their minds, even from the time he came out of his mother’s womb as an infant, he was murderous.” And so His Holiness was chuckling at this kind of view. But it’s the same kind of thing we do when we form an opinion of somebody. We make them all one thing and we think that’s all they ever are. I was thinking the other day (somebody was referring to anxious mothers, and tyrants, and things like that), that kind of labeling makes somebody into a certain thing, and that’s all we ever allow ourselves to see them as. That really limits our ability to see their kindness, to see our interdependence, to see how we are like them and how they are like us. How we’re all wanting happiness and not wanting suffering.

Another thing His Holiness said was that there are different kinds of motivations that we can have in refraining from harming somebody. One is the motivation that we’re going to get in trouble. Second is the motivation that we’ll experience the karmic consequences. The third is the motivation that this person is just like me and doesn’t want to suffer. He was saying, in terms of the first motivation, that it’s certainly the one we learn as kids. Don’t do something because you are going to get whacked, or scolded, or sent to your room, or whatever. The idea is that we don’t harm others out of fear. But, he was saying that’s not actually virtuous because your mind is so knotted up. Of course, it’s certainly better than harming other people. Nonharming out of fear is definitely preferable to harming. But the second motivation is to go past that and understand karma and its effects. Then, we don’t harm because one sees that we’ll receive the suffering result ourselves of the harmful actions that we do toward others. That is something virtuous and it brings a good result, but at the same time, it’s also limited. The third motivation is when we really look at the other person and say, “Wow, they want to be happy. They don’t want to suffer. I care about them, and I’m concerned about their wellbeing. I’m concerned with how they are. I want them to be happy. I don’t want them to suffer.” With that kind of awareness and motivation, we refrain from harming somebody. That’s like operating with bodhicitta; when we do all of our actions out of bodhicitta.

His Holiness gave those three motivations as examples of different ways that we can do the same action, in this case refraining from harming, but get totally different karmic results out of it depending on our motivation. To really look at our mind, we sometimes have to start at the lowest motivation, because that’s where we’re at. When we were kids, we didn’t fight with somebody because we’d get yelled at, or spanked, or something. But then hopefully, we do not just stay there, but progress. Some of us just stay there. Some of us don’t even get there, instead we just kind of just “Shine it on.” Or, “You want to punish me, so what?” Then we’re really in trouble.

But as much as we can have that altruistic intention that really genuinely wants others to be happy and that cares about their welfare, then our lives are transformed, and much more bodhicitta grows in us. That motivation of compassion and love is not bodhicitta. It’s compassion. It’s love. Bodhicitta is the aspiration for enlightenment motivated by compassion. Still, creating that kind of compassion and love are definitely beneficial. And then if we direct it toward generating bodhicitta, it’s quite wonderful.

Audience: Would you say that if you’re just recognizing that, “I wouldn’t want to do that to others” would that fit in?

VTC: “Do onto others what you want them to do onto you.” So I don’t want other people to hit me, so I don’t hit them. Yes, I think it kind of falls in there somewhere. That’s kind of a first step that we get to, isn’t it? We have to develop empathy for other people. So, I don’t like to get hit. I don’t like to get criticized. I don’t like people to impinge on me. So I won’t do that to others. That’s one thing. Still above that is, “I really care about others in a positive way. I don’t want to harm, because I don’t like to be harmed.” This is still on the side of, “I won’t do something bad to somebody.” But, it’s not taking the extra step of, “I’m going to do something that really benefits them.” Of course the two aren’t always so distinct. We could be angry and go, “I want to tell somebody off.” Then think, “Oh, I’ll lose my reputation and other people will think I’m bad.” And then we think, “I will also create bad karma and be reborn in a lower realm, so I won’t do that.” And then, “Well, I don’t like people to tell me off, so I won’t tell them off.” That’s different than saying, “I really care about the person’s feelings. I really care about their feelings and they are unhappy. They are troubled right now. So not only will I not tell them off, I’ll see what positive thing I can do and be of benefit, if I can.” 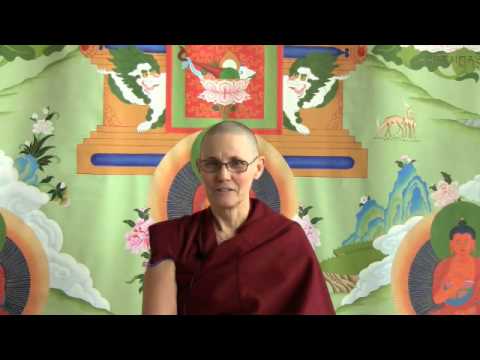 The Buddha is free from fear 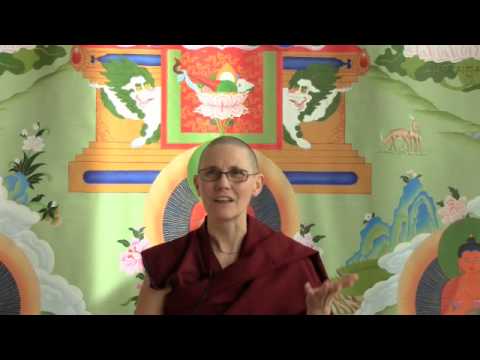 The antidotes to fear