Wisdom of the Kadam Masters: Antidotes to jealousy (download)

We’ve been talking about the antidotes. We’ll finish that up today. We talked about impermanence as an antidote to attachment. And attachment, anger, and jealousy, just to imagine getting what you want and then asking yourself, “Now what happens? Now am I satisfied? Now is this going to be what really makes it for me?” Then it becomes quite evident quickly that that’s not going to do it.

For jealousy in particular the antidote is rejoicing, which of course you don’t want to do when you’re jealous. But I think sometimes the pain of jealousy forces us to do that. I don’t know about you, but for me jealousy is extremely painful. You feel totally trapped by it. And it’s such a disgusting state of mind. Anger, you can go to a friend and say, “Oh, I want to vent because they did this and this and this.” You can’t go to a friend and say, “I’m so jealous,” because it’s such a disgusting mind that who wants to even admit having it? So if we can’t admit having it, then that makes it very, very difficult to oppose it. We have to be able to admit it, not only to ourselves but to others. Although it’s not very wise to tell the person we’re jealous of that we’re jealous of them. That does not work very well. You have stuff you’re projecting on them; as soon as you tell them you’re jealous of them then they start projecting stuff on you and then everything gets really messed up. So I find it’s better not to do that, but to try and deal with it internally.

Also, one thing that works very well with jealousy is to imagine: “I’m really jealous of somebody because they get to do (whatever), or they have certain qualities.” And then I say, “Okay, what would happen if I were that person? What would my life be like if I were that person? I’m so jealous of them, I want to be them, I want to have those opportunities, so okay, I’m going to switch and be them.” Then, that means all of them. So then what’s my life going to be like having all of the conditions that that person has?

Whatever it is that we’re jealous of, it always comes with some drawbacks. If we really see: “If I change positions with that person, am I going to want to have his kind of personality? Am I going to want to have to follow through on doing all the opportunities that I get now that I’m them?” Do you get what I mean? Really switch places and see, “Do I want to be that person?” And my answer is usually, “No.” I have enough problems already, I don’t need their problems. Because whoever it is we’re jealous of, they have their own set of problems, don’t they? They have their own internal suffering. And sometimes their internal suffering and their problems come from the qualities and opportunities that we’re jealous because they have and we don’t. But if you really imagine switching places with them, then you say, “Do I want to deal with the disadvantages too?”

Sometimes there’s jealousy when different people get to travel with me. “Oh, how come so and so gets to travel with you, and I don’t, and they got to go last time….” First of all, nobody’s thinking about me and my feelings, they’re only thinking about themselves and their opportunity to latch on and fly somewhere, but then you go and you look at what it’s like to do that. Then you have me scolding you all the time, because I am not easy on the person who travels with me, because my feeling is they’re doing it to be trained, so I’m going to train them, and when they make mistakes I tell them. And I don’t do it in the nice sweet, “You may not know this, but, please do this and don’t do that.” Because they’ve been there, done that before and now they’re messing up. So first of all you have me scolding.

You have to carry all the suitcases, which you don’t even like carrying your own, let alone mine. You can’t eat what you want, you have to eat whatever is being served where we’re going. You can’t be the star of the show because you’re the attendant, so your whole wish to be star of the show, you can’t do it. Of course you try and do it because you chat up everybody around you, because you’re the one who gets to meet all the different disciples, so you meet everybody, then you’re Miss Popular, and then what? You’re Miss Popular, but in the process of becoming Miss Popular then you’ve neglected your duties, and you’re mind’s gone off to left field, out of the ball park, so you usually wind up for a good scolding for that. You can’t do what you want when you want to do it because your job is to be the attendant.

Then of course you have all your projections on all the people that are coming and wanting to see the teacher. Sometimes you think, “Well, I’ve got to protect the teacher so I’m going to tell all these people ‘no.’ Because I’m so good, protecting the teacher.” But that’s not your job. Your job is to facilitate those people coming. But your job is also to prevent the teacher from getting exhausted. If you sit there and you’re “Miss No,” you think you’re a republican for the day and all you do is “no no no no,” then that doesn’t work. And then if you go the other way, “yes yes yes yes….” then the teacher’s flat out exhausted, and lets you know that in no uncertain terms. And then as soon as you forget something, you’re supposed to check in on the airline and you don’t, or you’re supposed to coordinate this and that, and you forget…. It’s not like this a free joy ride to go travel and have people treat you wonderfully.

So really think of it when you get jealous.

Or somebody else gets to go teach a class, and it’s not you: “She’s the one who always gets to teach the class, not me.” Why are you jealous? Because you want, again, to be Miss Princess spiritual mentor in front of a group of disciples who are going, and that’s a good motivation? Then you get to go be Miss Princess, and then what happens? You get tired, but you can’t say, “I don’t feel like going tonight.” or “I don’t feel like teaching this class.” you try to “oh I’m too tired.” Well tough, go anyway. Well, except you usually find somebody else to replace you. But you’ve got to go. And then people come up and ask questions afterwards, and you’re tired after giving a talk, you’re tired of being Miss Princess, you want to go lie on your bed with the pea under it [laughter] but all these people are standing in line to talk to you. And they all ask their questions, and their questions are sometimes telling you their whole life story.

What I’m saying is when you’re jealous, really think if you want to have the opportunity or do the thing that you’re jealous of the person for.

One of my friends was telling me that when she was taking a class she scored first place. And probably other people were jealous of her because of it. But then she suffered from all the anxiety of “how am I going to place first on the next exam?” And the other people, who didn’t place first, didn’t have that anxiety.

So you really have to check if you want what it is you’re jealous of.

There was one woman when I lived in France who had been married a number of years to some man that she really liked, and then he went off with a younger woman. At first she was really desolate, and I said, “Look, you’re so lucky, you don’t have to wash his dirty underwear and dirty socks and clean up after him now. She gets to.” Because that’s true, isn’t it? If you’re married to somebody, you’re the one who gets to pick up after them. Or you become their secretary. Or you’re the one that they vents on whenever their angry. So you have to look at the whole situation when you’re jealous of somebody and see if you really want the whole thing or not. Because usually when we’re jealous we are exaggerating the good qualities of whatever it is we’re jealous of. “Oh, that only has good qualities, if only I could do that.” 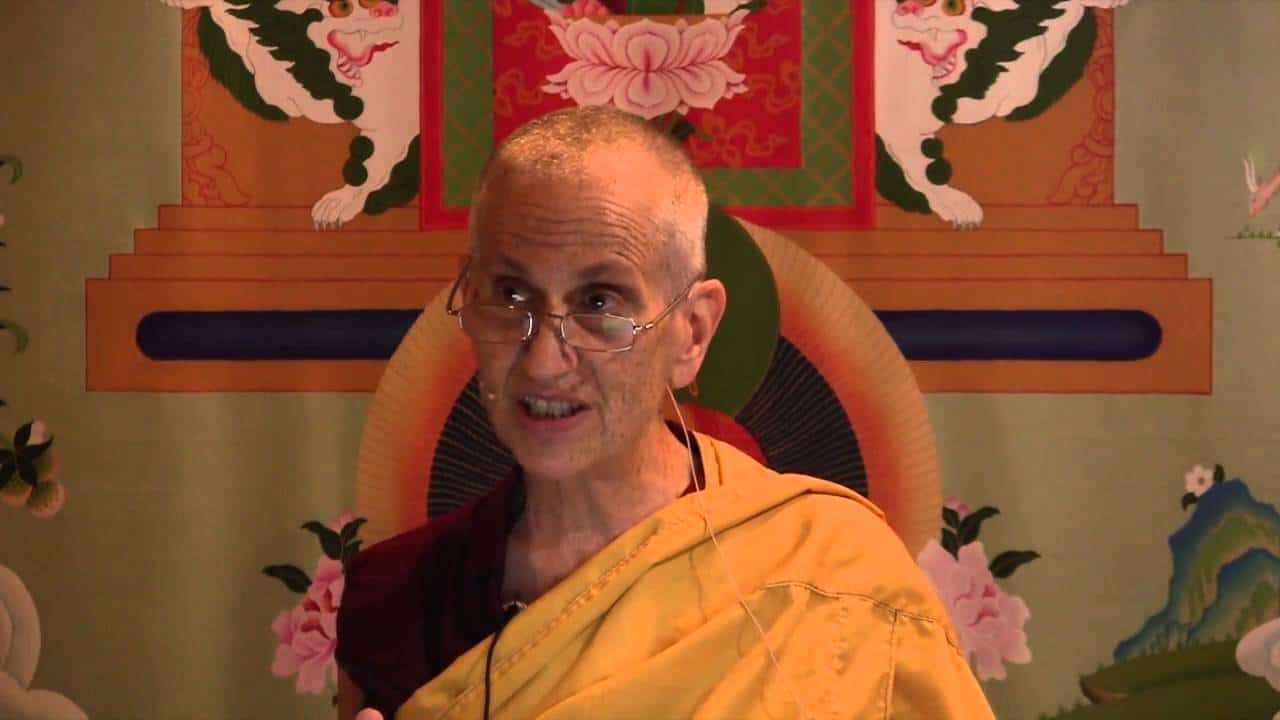