“Comrades in Alms: Venerable Thubten Chodron discusses the challenges and joys of being a Western Buddhist monastic.” Interview by Marie Scarles for tricycle.com.

Can traditional forms of Buddhist monasticism—which include vows of celibacy and the renunciation of worldly pursuits—flourish in a culture that’s saturated by an opposing set of values?

In October 2015, over 30 Buddhist monastics met to discuss the ways their training can serve the modern, Western mindset. The 21st Western Buddhist Monastic Gathering, held at Sravasti Abbey in northeastern Washington, brought together monastics from numerous traditions to collaborate, practice, and support one another. The theme of this year’s meeting was “The Challenges and Joys of Monastic Life.” 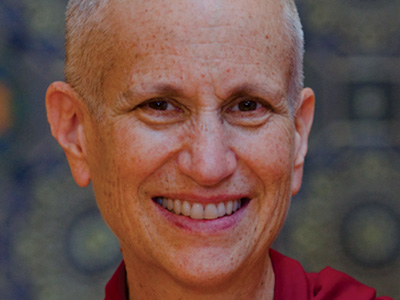 Venerable Thubten Chodron, who is the founder and abbess of Sravasti Abbey, recently spoke with Tricycle’s editorial assistant, Marie Scarles, about the gathering and her experiences as a Buddhist nun.

Can you tell me a little bit about the history of the Western Buddhist Monastic Gathering?

It was started 21 years ago by a Tibetan nun in the Bay Area. As the years went on, more people came and more groups were invited—it wound up becoming a really wonderful event. We see it as a gathering of friends who have a common purpose and common values. It gives us a chance to meet with people who are like us, people who really understand and appreciate the monastic way of life.

As far as I know, there’s no analogous meeting that is held in Asia or within one Asian country. What are the particular conditions of the U.S. or of the West that have led to the necessity and interest in having a gathering like this?

In Asia this hasn’t happened because people don’t speak the same language. Here we all speak English so we’ve been able to learn from one another, to see the commonalities in Buddhist traditions and to acknowledge the differences. It’s given us a chance to discuss how to set up a monastery in the West so it’s compatible with Western culture but still a Buddhist monastery. We can discuss the kinds of issues that come up in a community and how to handle them.

Also, because there are so many different Buddhist groups in the U.S., this gathering is a chance to hear about one another’s traditions. Rather than hearing things second-hand and passing down rumors and stereotypes, it’s better to meet and become friends. We have so much in common as monastics. In European countries and Australia it’s similar, because you have so many traditions together in one space. By comparison, in a country like Thailand, almost everybody is Theravada. They have their own systems and their own groups. Each group within the Theravada tradition in Thailand is going to get together with other people in their own group. The same happens in India with Tibetan Buddhists. The West is a place where people reach out and meet people who are different.

Is there a difference between the way monastics are regarded here versus the way they’re viewed in Asia?

For sure. In Asia, if you go and live in a Buddhist community, it’s a totally different ball game than living as a monastic here in the West. If you’re in a country where there is a huge Buddhist community, people understand something about your life as a monastic. When you’re living here in America you go out and you get all sorts of interesting responses. People have no idea what you are!

I can imagine! Westerners are not particularly accustomed to shaved heads and orange robes. How do you think this affects the way people relate to you?

I’ve heard some people say, “Oh, it creates a distance with other people.” But my experience is that it creates a bond with other people. I’ve always worn my robes in town; I’m always clearly identifiable. When they see us in public, people have some kind of need or curiosity or admiration, and so they reach out. I have people come up to me and say, “Do you know the Dalai Lama? Are you a Buddhist?” You find this kind of thing, especially now that His Holiness is well known in America. Some people will say it in a more tactful way, like, “What are you?” When I tell them, they say with appreciation, “Oh, I knew you were some kind of religious person.”

I’ve had people ask me about rebirth and if I could please explain it. One guy on an airplane unburdened what was in his heart to me. I guess I was a safe person!

I have some amusing stories to tell, too. [Laughs.] One time—actually, this has happened more than once—a woman came up to me and very kindly and compassionately put her hand on my shoulder and said, “It’s okay, dear. When the chemo’s over, your hair will grow back.” They say it with so much kindness that I just respond, “Oh, thank you very much.” If I’m not running off somewhere I’ll say, “Oh, fortunately, you know, I’m doing this by choice. I’m a Buddhist monastic.” People don’t know what you are, but they’re curious and they’re interested. I find that when you explain things to them, they understand and they get it. They understand why somebody might want to be a monastic and the special things that we do or don’t do.

The thing that I find most disturbing is, at times, the response from Western lay Buddhists. Lay Buddhists in Asia love the monastics and respect what we’re trying to do. But Western lay Buddhists often rely on old stereotypes and don’t understand what monastic life is and what it’s about. That is more disturbing to me personally than general people in society who have no clue what Buddhism or monasticism is.

What are some of the stereotypes of Western monastics?

Sometimes, you hear people say, “Monastic life is old-fashioned. We don’t need it now. It’s no longer relevant.” Or they’ll say, “Oh! You’re celibate? Are you repressing your sexuality and denying feelings for intimacy?” Or, “Oh, you’re ordaining. Aren’t you escaping from reality?” It’s jarring, especially when it’s lay Buddhists in the West saying these kinds of things.

What are some of the difficulties of being ordained in a cultural climate that is not monastic-friendly?

The values of our American culture and the West, in general, are aimed toward the idea that happiness comes through the five senses. We’re called desire-realm beings for a reason. Our minds are perpetually distracted outwards toward and looking for pleasure from sense objects. That doesn’t simply mean nice things to see and smell—it also means reputation and status and love, approval and praise, all of these things that come from the outside. The whole image of a successful life in America is based on external things: having money, being famous, having good relationships with your family, and maybe being artistic. Whatever field you’re in, everybody wants to be the best and they want to be known as the best. So the world vision of a successful, happy life is very different than a monastic’s vision of a successful, happy life.

Do you think some of these pressures are unique to the U.S., as opposed to the rest of the world?

Being attached to external things is universal to living beings. We all have the same afflictions; it doesn’t really matter what society you’re in. Society will influence exactly how it looks on the outside.

Another topic you discussed at the gathering was the cultural difference between Western monastics and your Asian teachers and supporters. What were some of the issues raised?

I see this much more as a cultural thing, not so much as something that is solidified in the teachings themselves. I know you can point to passages in Buddhist scriptures that would support the opposite—you can do that in any religion. But my personal feeling is that the obstacles to change are not the few passages in the scriptures, they’re the cultures that the dharma is embedded in.

And it’s not like American culture is gender equal, either. I’ve had some interesting experiences, in that regard, where you would think that people would be more aware of gender equality in the West, and they aren’t at all. The first one that comes to mind is whenever I get a letter from someone who doesn’t know me personally. It’s usually addressed “Dear Sir.” They assume that if you’re the leader of a monastery, you must be a monk. This happens in the West.

Related: Gender Revisited: Are We There Yet?

Is there anything else you would like to add?

Yes! The joy of being a monastic and that Buddhist monasticism is something important. Not that everybody has to be a monastic—that’s their individual choice. But monasticism is an important element of the dharma and to the existence of the dharma in the West. Whether or not people are ordained, I think it’s important to have an understanding of what monastic life is—why somebody would become a monastic, what our role is, the importance of monasticism in preserving and spreading the dharma, as well as ways that the lay community and the monastic community can cooperate and learn from each other.

I think that there really needs to be broader education about monks and nuns and monasteries and things like that so that there can be better relationships and more understanding.

If you’re someone who is suited for monastic life, this lifestyle can be very joyful. You have a real sense of purpose and meaning in your life. There’s a special feeling of closeness to the Three Jewels [the Buddha, dharma, and sangha], and you can be more transparent as a human being without having to play a lot of games. You have dedicated your life to the dharma and to benefiting others; that intention steers you in a wonderful direction. Of course there are the challenges of working with our ignorance, anger, attachment, and self-centeredness and cultivating love, compassion, and wisdom, but as you see yourself and those around you change, there’s a lot of satisfaction.