Qualities of the Dharma Jewel

Qualities of the Dharma Jewel

The Essence of a Human Life: Qualities of the Dharma Jewel (download)

To continue with the qualities of the Dharma refuge, again from gyü lama. Yesterday we did the Buddha Jewel, today we’re doing the Dharma Jewel.

What brings about the true cessations are the true paths. The true paths are minds that are informed by the wisdom realizing the ultimate nature of reality, their emptiness of inherent existence.

When we’re talking about true cessations there are two factors: the natural purity (which is, again, their emptiness of inherent existence, which is their ultimate nature), and then the purity of the adventitious defilements (the purity of the mind that has removed those defilements). “Adventitious” meaning “temporary,” because in Buddhism all the defilements of the mind are temporary, they all have antidotes and can be removed.

In The Sublime Continuum there is a verse about the Dharma Jewel I’ll read, and it lists the eight qualities, then we’ll go through those. It says:

The first quality is the excellent quality of being inconceivable. Inconceivable. It’s one of those words that means different things in different contexts. Here it means that it can’t be conceived of exactly as it is. According to the logicians who get very tangled up in confused logical reasonings. The example they give is of the tetralemma, saying things are not existent, not non-existent, not both, not neither, and then these logicians don’t know how to properly understand that, and then they say, things are neither existent nor non-existent, and they’re some kind of spacey, ineffable something that’s inconceivable. But that’s not what true cessations are. Or true paths, for that matter.

Here, “inconceivable” means that those logicians with those kinds of confused views cannot conceive exactly what the Dharma Jewel is all about. This is referring specifically to the true cessations. The true cessations, like all phenomena, exist by being merely designated in dependence on a basis of designation. They’re realized by a non-dualistic mind in which subject and object have been fused, like water poured into water.

The second quality is being without the two. Here the two that it’s without are the portion of afflictions that it’s the freedom of and the polluted karma that it’s also the freedom from. Afflictions and polluted karma, they’re the causes of samsara, so here when you’re developing true paths and true cessations you’re eliminating these causes of samsara. So it’s free of a portion of those two.

This freedom, again, has to be experienced by the individual. It can’t be described by words. But I think we can get a little bit of a hint if you think what would it be like to never get angry again, no matter how somebody talked to you, what they said, anything. They could say, do anything, but inside you anger would never arise, and you had the confidence that anger would never arise. And you are not suppressing that anger either. It’s just that the anger and the seed of anger are completely gone. That would be really nice, wouldn’t it? That gives us a little feeling of what it might be like.

Here, you have to remember, conceptualization—even though they call it conceptual thought, or conceptualization—it’s not referring to our gross conceptual processes, like me thinking in words to myself. It’s a much more subtle type of conceptualization where the mind is grasping to things existing in a certain way and not even realizing that it’s doing that.

The fourth quality is the excellent quality of purity, meaning that the Dharma Jewel is not mixed with any of the obscurations. It’s free of any kind of obscuration that prevents it from realizing the nature of reality directly. That’s because that arya paths are wisdom consciousnesses directly realizing emptiness—at least how they’re being spoken of here.

The sixth quality is it’s of the antidotal class. This was the point that I couldn’t remember from before. When we’re talking about true cessations, we’re talking about the eradication of afflictions and their seeds by a mind that is of the antidotal class. In other words, a mind that realizes emptiness. The reason we’re doing that is because you may be sitting here listening right now, and you’re not angry, so in one way we could say there’s the cessation of anger in your mind, but that’s not a true cessation because it’s not brought about due to a wisdom consciousness that uproots the cause of the anger and the seed of anger. It’s brought about simply because you haven’t bumped into something that’s making you mad at this moment, but the seed of anger still exists, so the possibility for anger still exists.

The true path is of the antidotal class. In other words, it perceives things the exact opposite way from the way ignorance holds things, and thus it can overcome ignorance, and thus the true cessation that you’re left with is something that cannot change, that cannot degenerate at all. Once that portion of afflictions is eliminated it’s gone for good. It can’t come back.

That’s real security. Everybody’s looking for security these days. I think true paths and true cessations are the real security. Financial security? We’re never going to have. Relationship security? Also unpredictable. But this kind of security, through our spiritual practice, is something that’s attainable.

The seventh quality of the Dharma Jewel is the excellent quality of true cessations. That embodies those first three qualities: being inconceivable, being free of a portion of the afflictions and the polluted karma, and being without conceptualization, so there’s no appearance of true existence or grasping at it. The seventh one summarizes the first three.

To be a Dharma Jewel you don’t need to have all eight qualities, you just need to have some of them. For example, the liberated path, it only has the qualities of true paths, it doesn’t have the qualities of true cessations, because the liberated path itself is something that’s conditioned and impermanent. True cessations are permanent. With the Buddha Jewel you need all eight qualities. With the Dharma Jewel you only need some of them.

[In response to audience] An arhat would have all of these. It says it applies to the aryas of the three vehicles.

Usually when you talk about Buddha, that includes all four kayas. You have to talk about “arya buddha” if you’re talking about the person, a person who is a buddha, because the omniscient mind of the Buddha is not a buddha, is not a person. The nature truth body is not a person. They’re attributes of a person. They’re basis of designation of the arya buddha. But remember, the basis of designation and the designated object are not the same thing.

[In response to audience] The conventional Buddha Jewel.

[In response to audience] This kind of explanation helps you understand exactly what the Buddha, Dharma, and Sangha Jewels are. That’s why I’m going through this, even in the context of a text that is a very general text, that’s meant kind of for the people off the street, because I think it is important for people to understand exactly what the Buddha, Dharma, and Sangha are. Usually when they teach the topic of refuge they give very simple explanations. One of my teachers would say, “It’s like when you’re a little child and a big dog comes to bark at you and you’re scared, you run to your mama. You take refuge with mama.” They say, “It’s that kind of feeling of you’re going to the Three Jewels of refuge.” That gives you some—you know, if you’re really new and not thinking deeply about stuff—that gives you something. But I think that people nowadays, His Holiness is really encouraging everybody to learn and study, and I think people really want a better Dharma education now and aren’t content just with simply knowing the general things. They want to understand better. So that’s why I’m explaining it in this context. 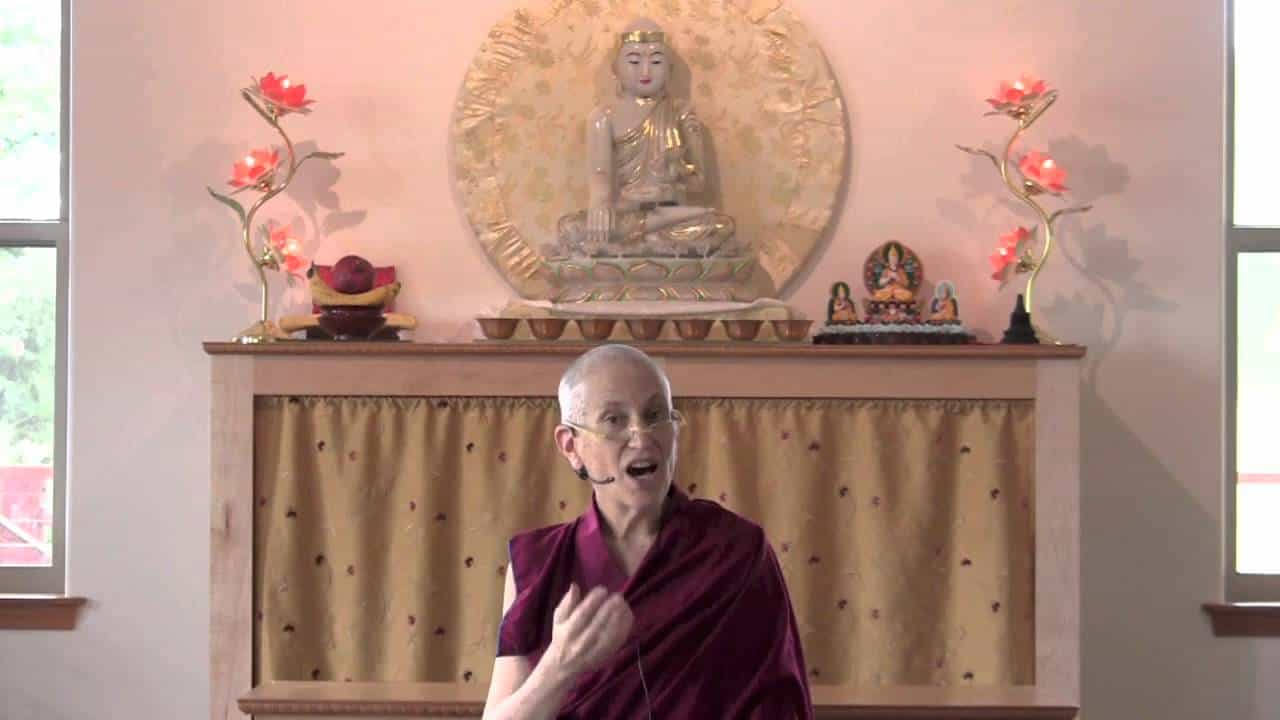 Qualities of the Sangha Jewel