The Essence of a Human Life: The certainty of death (download)

We’ll continue with The Essence of a Human Life: Words of Advice for Lay Practitioners that was written by Je Tsongkhapa. We are on Verse 4,

Death will definitely come and will quickly come.
Should you neglect to train your thoughts
again and again on such certainties
you will grow no virtuous mind,
and even if you do, it will be spent
on enjoyment of the glories of this life.

The first line, “Death will definitely come and will quickly come.” We have some resistance to this. Yes? Death will definitely come. That’s some resistance. But well, maybe it’ll come. But it will quickly come? “Absolutely impossible. I have too many things I want to do. There are too many things going for me in my life. And actually, I’m too busy, I don’t have time to die. [laughter] And I’m involved in doing so many projects, and have so many friends. I am so embedded with this world, how could I possibly die? I’m just too embedded in it. I’m glued to this world. It couldn’t let me die. And anyway, if I died all these people would protest and so surely I would stay alive, if people protested.” That’s what we do, don’t we? We protest and then the situation changes.

It’s helpful, how they have us meditate on this with the nine-point death meditation, it’s very helpful because the first big point there is that death is definite. So that chips away at the first resistance we have.

The second big point is that the time of death is indefinite. That chips away at that.

And then the third is that the only thing that’s good for us when we die, that we’ll take with us, is our karma and our mental habits. Not our possessions. Not our friends and relatives. And not our body. So that means that nothing can stop us. Protests. No protests. It doesn’t matter. Nothing can stop death when it’s coming.

To start with the first one, that the time of death is definite. There we first begin recalling that everybody has to die, and it doesn’t matter…. All throughout history people have died, so there’s not going to be any reason why we’re going to be exceptional. And even people who are holy beings in previous lives died. So it happens to everybody. Doesn’t matter social class, education, all that talk we had about privilege and not privilege. Forget it. Death is the great equalizer. It happens to everybody.

And there’s no place to go where we won’t die. We just sent this thing to Pluto and took pictures, and I’m sure somebody’s thinking, “Oh maybe if we send people to Pluto maybe they won’t die there…. We’ll have a special spa for them. Or maybe Pluto’s too far, we’ll go to the moon and people won’t die there. We’ll go somewhere else.” Well, that doesn’t work either because just having a body that is produced by afflictions and karma, it doesn’t matter where that body is, it’s in the process of decaying and it will eventually cease. Doesn’t matter where you go.

Then the next point we think about is that…. We always kind of think, “Well, death isn’t really definite, because I haven’t gotten around to practicing Dharma yet. It’ll become definite later. In the meantime, I’m too busy and I have so many things to do in my life that are so exciting.”

Here they talk about (how) at the beginning of our lives we pass most of our time when we’re kids playing, because we don’t know any better. We don’t know the Dharma. We don’t know much, so we spend time playing. And that goes on for a good 20 years. Doesn’t it? Just playing. And it doesn’t really end when you’re 20 either nowadays. They’re saying that there’s a new developmental stage that kind of goes until you’re 30…. So you play.

And then the second period of your life, then you finally settle down. You get a job, you get married, you have kids, you work to support your family, you support your kids, you do everything that parenting entails, and everything that keeping a family together entails. And everything you need to do to be a success in your career, because it isn’t only family that’s important, it’s also career, status, these kinds of things. So you spend a good period of your life doing that.

And then, finally, when it’s time to retire…. Sometimes you don’t retire. But in Singapore they make you retire. It’s interesting. In the States they don’t make you. They kind of arrange for it, like, they lay you off. But in Singapore you actually have to retire. And then you spend that time playing Majong, playing poker, playing golf, visiting the grandchildren, trying to decipher your Medicare bills with all those numbers. (Who can read all the things that they give you when you have… You know what I mean. When you have some medical procedure they send you the invoice for it, and it’s all these numbers, and you have no idea what they’re talking, so you spend many hours each day trying to figure out what in the world they’re telling you to pay for, and what in the world you have, because they charge individually for the needle, and individually for the rest of the syringe, and then individually for what goes in the syringe, and then individually for the person who gave you the shot, and that’s just amongst all the other things that you do so you have plenty of sheets of paper to spend time looking at and trying to figure out.)

And then death comes. And we’re not very prepared.

The reason we think about death like this is not so that we become panicked and fearful and paralyzed and full of dread. But the fact that we’re mortal, when we really think about it, it can invigorate our lives and it makes us choose our priorities. Because clearly we can’t do everything. If we know that we’re going to die, and that our life span is limited, and that our health is also limited, then we have to think, “What is most important for me to do?” And that’s a very important thing to think about. “What is most important for me to do?”

We have to do what’s most important because we’re going to die and we don’t know when it’s going to happen, and there’s no appeal form. So we really have to think, “What is important?”

Now, of course, if you choose not to pick your child up at school, that’s going to have a certain result that you don’t want to have. But I think it’s good to recognize that it is a choice, so rather than complain that you have to do it, say, “I’m choosing to pick my child up at school because I want my child to be safe,” so that you do it with a good reason, instead of full of resentment and obligation and everything like that.

So spend some time thinking about this and really thinking, “What are my priorities in life? When I die what do I want to look back on?” Not look back on as in “reminiscing,” but look back on in terms of “How did I spend my life? What did I spend my time doing and thinking and feeling and talking about?” And then when we do that it becomes clearer what our priorities are because we realize that we spend a lot of time doing things that are totally inconsequential, and in fact the next day we even forget that we did them and it doesn’t really matter if we did them or not. Unless we’re applying a good motivation to doing those things, in which case some of those things can become actual virtuous activities, like when I was talking about the thought training practices with the gathas, you know, saying when you go upstairs thinking that you’re leading sentient beings to enlightenment. Going downstairs to rescue them from the hell realms. Cleaning is cleaning the minds of sentient beings. So if you do a lot of your things in life applying those kinds of thought training techniques then they become virtuous activities. But we actually see we have a lot of things that we just mindlessly do. 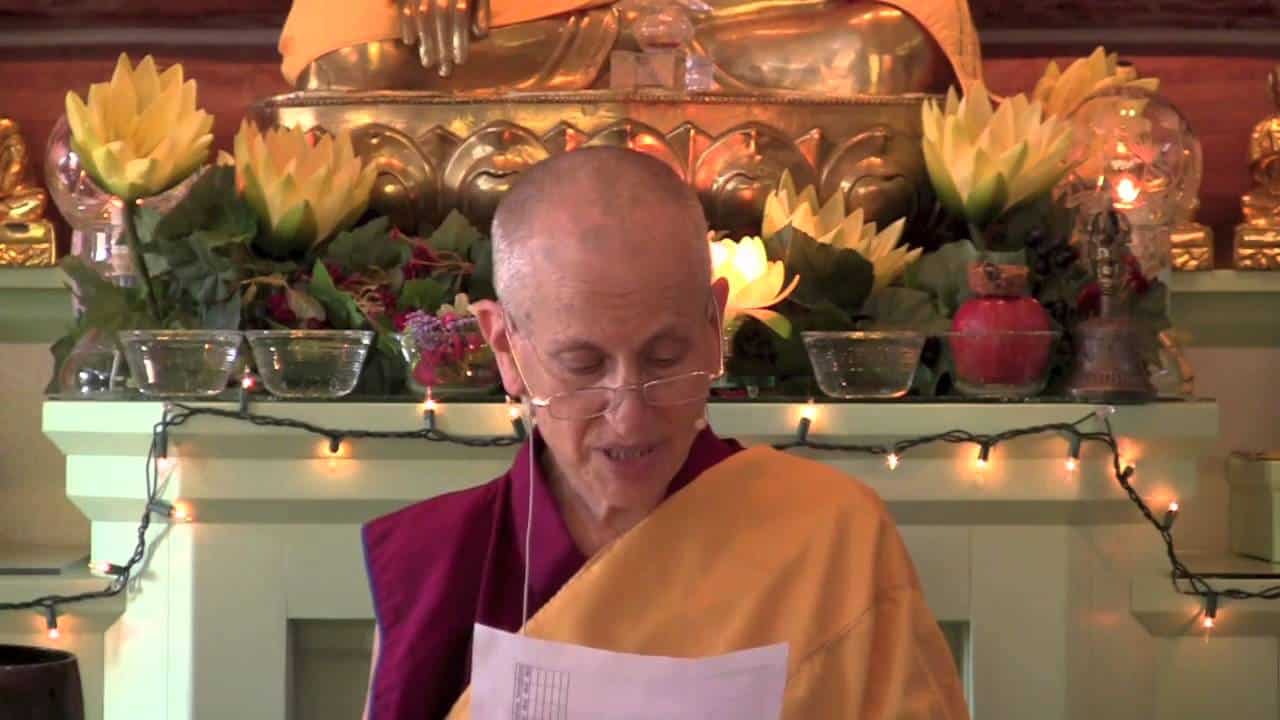 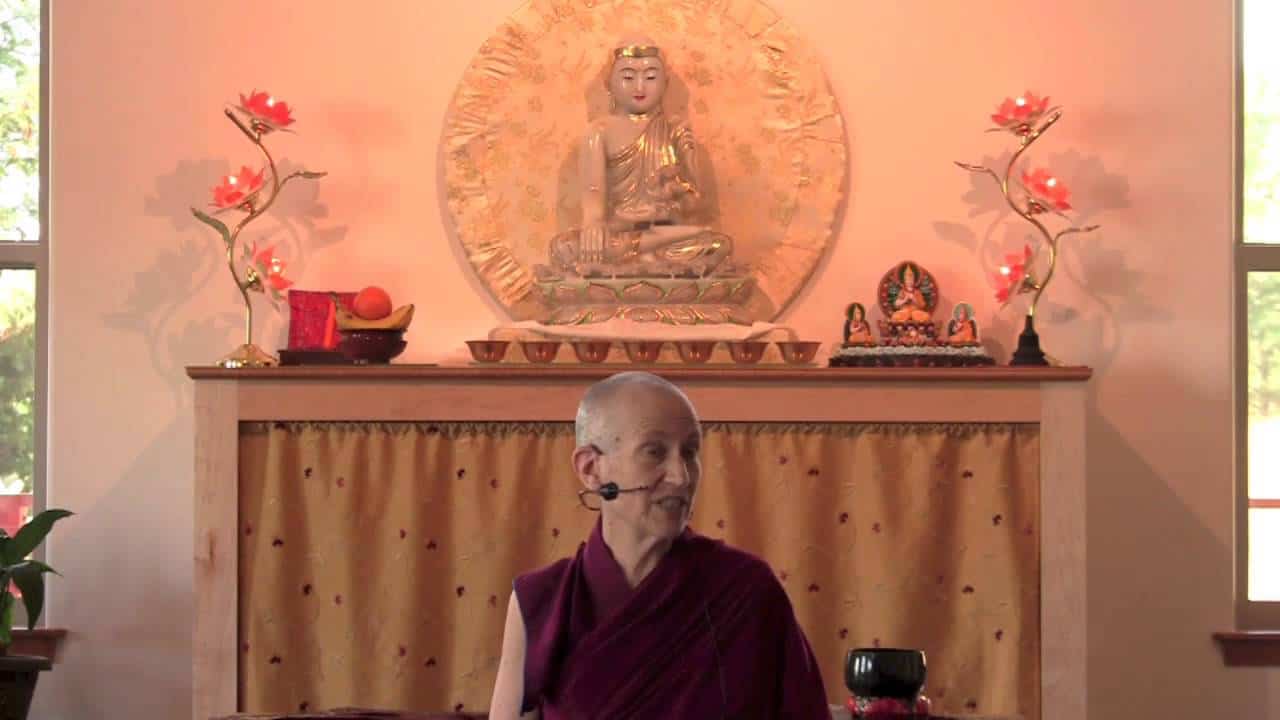