Relying upon Tara the liberator

Relying upon Tara the liberator

The Essence of a Human Life: Relying upon Tara the liberator (download)

“Those adrift on great seas of suffering I will save.”
A powerful vow made good.
To your lotus feet, compassionate goddess
I offer this bowed head.

This is Je Rinpoche, again, at the beginning, paying homage to Tara, and specifically the quality he’s paying homage to is her great compassion and bodhicitta, as well as her wisdom which allows her to be of greatest benefit to sentient beings. So, “Those adrift on the sea of suffering,” that’s all of us, all sentient beings of the six realms. And her pledge, “I will save,” meaning she will lead us to liberation and to full awakening.

Paying homage to Tara in that way really shows that she’s a reliable refuge because she has great compassion for us. And she’s able to lead us to liberation because she’s arrived there herself and has the wisdom that is necessary…. She’s realized, through her own wisdom, the emptiness of true existence which is the crucial thing to eliminating all the obstacles and enabling us to attain liberation and full awakening. So she’s a reliable refuge and there’s no reason for her to lie, and no deceptiveness in her understanding, and no manipulation in her motivation. So really encouraging us to listen.

They always pay homage at the beginning, like I said, to accumulate merit, but also as a way of making a promise to compose the text. It’s like before you undertake a big endeavor, it’s good to pay your respects to those superior and make a very strong promise to do what you said you’re going to do. So not to just like, “Hi Tara,” and, “I’m going to write this text, but I got really busy and so forget it, some other time.” Yes? Not like that. Really having the determination and carrying it through and writing the text.

There’s a nice story about Tara and how she got the name Tara, which means “the liberator.” Here he used the word “save,” that she saves others, but I think “liberate” is actually a better word. “Save” is much more of a Christian word. “Liberate” is actually what she’s doing, by showing us the path.

As the story goes, in some universe in some distant past (and don’t ask me if this is true or not, because I don’t think it really matters), she was a princess called Yeshe Dawa, and very committed to being of benefit to sentient beings. And cherishing others more than herself so that before she ate breakfast every day she would make sure so many sentient beings had attained liberation or enlightenment, and before she ate lunch every day so many others attained the highest good, similarly before she ate dinner. So she was liberating all these beings and doing a very good job, and some monks came to see her and said, “Oh you’re doing such a really good job you should pray to be born as a man in your next life.” And she said, “Thanks fellas, but no thanks,” and made a determination to be a woman in all of her future lives and to attain awakening in the form of a woman.

I think by the time you’re at that stage of attaining awakening the men and the women, the whole things means absolutely zero to you, because you see it’s just labels on the basis of atoms and molecules, and that’s all it is. It has no other meaning in terms of somebody’s intelligence or emotional receptivity, or any of these other things. People nowadays get so much into, “This is a masculine trait and this is a feminine trait,” and I can’t really resonate with all that, to tell you the truth. A lot of people do. And you have in Buddhism the “feminine divine.” What’s that? I mean maybe the symbols…. Or you have feminine symbols. But when you really contemplate emptiness the whole idea of men and women goes out the window, in the same way the whole idea of racial difference, of ethnic difference, of all these other ways that we discriminate and divide each other, when you really meditate on emptiness you see that’s just imputation by thought, and that thought’s created by the human mind. And some thoughts created by the human mind are baloney. Or other ones, maybe they’re not baloney but they’re just conventional designations for the sake of ease, but they don’t really have much meaning aside from that.

Anyway, so she became enlightened in the form of a woman. Great, huh? The more enlightened beings the better.

Paying homage, I think, in that way is quite good for us. It also makes us think of Je Rinpoche as making a commitment to write the text, that then we should make a commitment to think about it. Because when I think when somebody makes a commitment to do something and I’m the beneficiary then—I may not have asked Je Rinpoche to write the text, but I’m clearly one of the intended audience (although this one’s intended for lay practitioners, still the message is for monastics as well)—that I have some responsibility in the deal. It’s not just the teachers teach and I kind of stretch back and, [yawn] “Okay, I feel like listening today, what do you have to say for yourself?” [yawn] “Ahh, but today actually I’m too tired, I’m going to go to sleep….” Or, “I’m going to a wedding today,” or, “I’m going on a boating outing today,” or, “I’m just busy. So you teach and then sometime I’ll get around to listening to it when I’m in the mood.”

Which is often how we approach the Dharma, like that. You know, Je Rinpoche and all of our other teachers…. Today is His Holiness’s birthday. Their job is just to teach and we have no commitment in the deal. And I don’t think that’s quite right. I mean, okay, when you’re a new person you don’t know what’s going on. But after you hear some Dharma and you understand something of what’s going on then we realize that Je Rinpoche can’t be a teacher unless we become students. And so if he’s willing to do that then we should try and be willing to really study and think about what he’s saying.

[In response to audience] How do you use emptiness to not suffer from discrimination? You recognize that the people who discriminate are holding on to very fixed ideas, grasping at inherent existence. Their minds are distorted. What they’re holding on to is not true. So we don’t need to adopt their stereotype of us.

There are two aspects, I think, to any kind of discrimination. One is the institutional aspect where there are definite external obstacles. The other aspect is the group discriminated against takes on an attitude of either anger or self-pity or doubt (maybe what they’re saying is true), and, in other words, there’s some response to the discrimination that has afflictions in it in our own mind. And those afflictions are ours. And I think they do great damage. Not only the external institutional afflictions, but from whatever oppressed group you encounter, the fear, the anger, the low self-esteem, the defensiveness, whatever it is, that wastes a lot of our time and energy. Whereas if we realize that “this is just other people’s wrong views, I don’t need to buy into it at all, and I’m going, and wherever there’s an open door I’m going to go through it,” then we eliminate a lot of the problems that come from our afflicted response.

And I think by our doing that, it also shows people that we are competent. And then people (hopefully) start changing their views. Of course, you do have to speak up about things. But you always have to speak up in a skillful way, so that the people whose minds you want to change can hear what you’re saying. Because if we say things in an angry, accusative way people can’t even listen to the content of what we’re saying because they’re so busy reacting to the emotion and nonverbal part of it. Or the tone of voice, the verbal part of it.

I think, personally speaking, coming back to the West gave me a whole lot of freedom to do things that I couldn’t do in India. I mean, I treasured the time in India. It was fantastic. I would not have given that up for anything. But in terms of having received a good education, being able to spread my wings and try out my ideas and things like that, this [American] culture provided that opportunity. Although there’s a lot of gender discrimination amongst Westerners. Which you think there wouldn’t be. But there is, sorry to say. 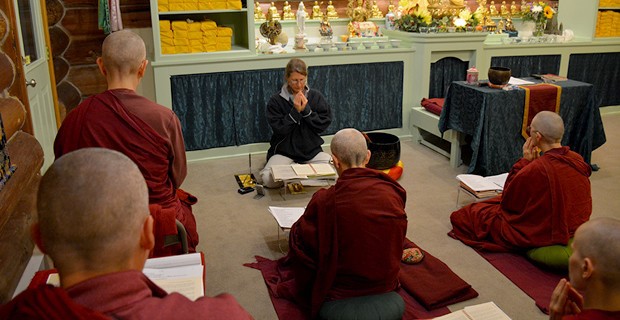 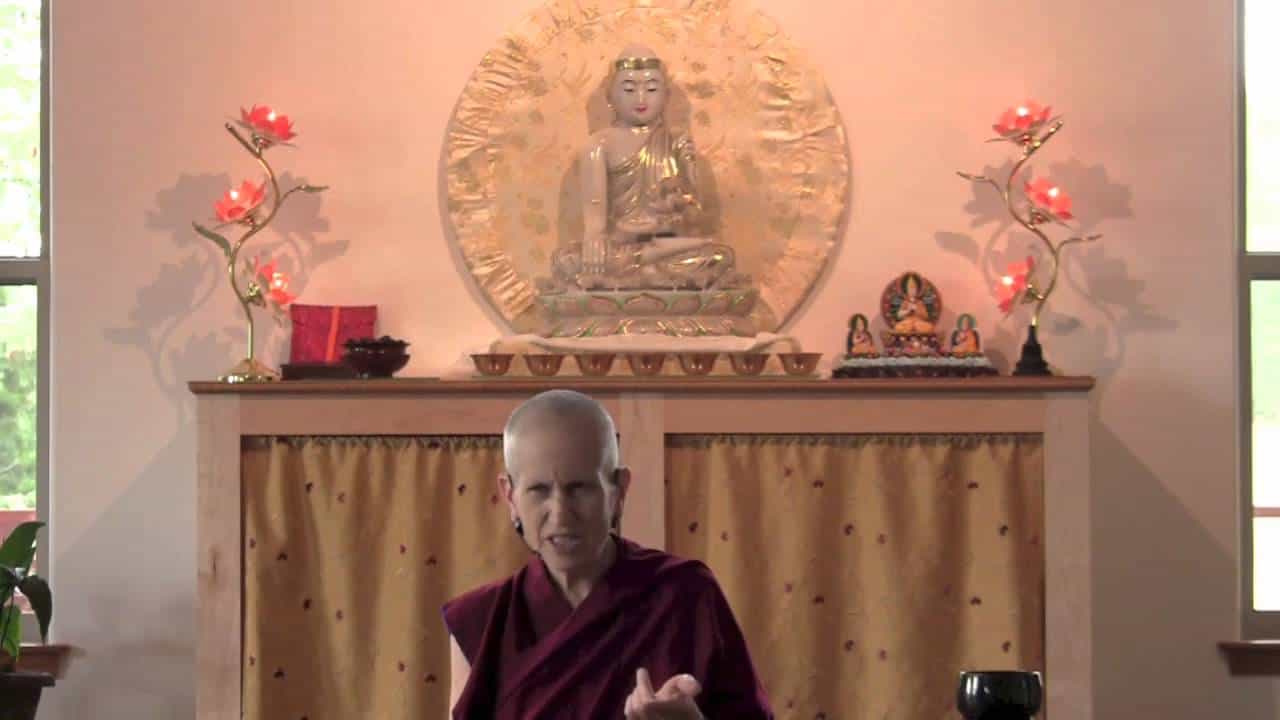