The Essence of a Human Life: Letting go of worldly concerns (download)

We’ve been talking about The Essence of a Human Life: Words of Advice for the Lay Practitioner. There are a few lines here that I want to go into in more depth. When he was saying,

Death will definitely come and will quickly come.
Should you neglect to train your thoughts
again and again on such certainties
you will grow no virtuous mind,
and even if you do, it will be spent
on enjoyment of the glories of this life.

I wanted to focus on the last two lines: “Even if you do (generate a virtuous mind), it will be spent on the enjoyment of the glories of this life.” That’s the eight worldly concerns. Concern for happiness of only this life.

I was thinking about this this morning for the [Bodhisattva’s Breakfast Corner], and then I got an email from somebody who said that he listened to my talk on the mindfulness craze and in it I had quoted one Google executive as saying (and now I’m paraphrasing it), that it really disturbs him when other people make the world better better than they do. In other words, we’ve got to be the ones that make the world better better than anybody else makes it better.

This person who wrote me the email said that it just jumped out at him, and that he realizes he really needs to be careful. Right now he’s going into some new kind of work, really with a good motivation to try and do something good for the people that he’s benefiting in his new work and and in the new program that he’s developing. But he said this line really made him realize that he’s got to make sure that he keeps a really pure motivation and not compete with everybody else, or anybody else, as to who can make new programs better, and who can improve the educational system more than other people can, and who can do this better than others. And I thought that was quite sharp, you know, because that’s a very good example of that line, of even trying to create virtue, but then your mind gets hooked by the eight worldly concerns of wanting reputation, and then your virtue actually diminishes.

I was shocked at that line from the Google person, too, which was exactly why I quoted it in the talk. To be really careful, when we’re creating virtue, not to compete with other people. And not to get jealous of other people. Because all of that relates to simply attachment to the happiness of this life. Attachment to good reputation, aversion for bad reputation. And then our mind becomes just like the minds of people who want a good reputation because they sell golf clubs. Or have a good golf game. Or got the best reward for being the best correctional official in the prison that month. You know? It’s all reputation. And they say that attachment to reputation is one of the most difficult attachments to let go of–the great meditators say that attachment to food is easy to work on to let go of. But reputation is much more difficult because you could go into your retreat place and be content with the food you eat, but have the mind that’s saying, “I wonder what the people down in the town are thinking about me.” You know? “Do they know what a great practitioner I am? Do they think that I have realizations now? When I finish my retreat am I going to be able to go back to town and people will think that I’m really hot stuff, because I’ve done this retreat. Maybe I even have a new title. Maybe I know how to look holy….” It’s very seductive, you know?

This is in the Dharma realm. We can compete with other students, who can sit for the longest, and who the laypeople like the best. Or who’s the smartest, or who’s this, or who’s that. We can do that. Which really corrupts our virtue tremendously. But even getting yourself to the monastery is prevented by attachment to the eight worldly concerns. Because we always have this thing at the Abbey…. So many people apply to come here, and want to come here, and then we don’t see them. They don’t make it. So we have an expression that we don’t believe that they’re coming until we see the whites of their eyes in the meditation hall. Because we’ve had some people, they don’t even get here. Some people get here, but they can’t get into the meditation hall. We’ve had people come here ready for a week long program, be here half an hour, turn around and go home. And then of course, the people who don’t even get in the car to come here, and have all sorts of reasons for that.

But if we really look, so often what trips us up in our sincere quest for the Dharma, and for meaning in our lives, is simply attachment to the happiness of this life. And in particular of the eight worldly concerns, this one about reputation. “What are people going to think of me? If I go on a retreat, and I come back to work and people say, ‘What did you do on your vacation time?’ And I say, ‘I went on a retreat.’ And they say, ‘You sat on a retreat for two weeks looking at your belly button? Why don’t you get a life?'” And then all of a sudden we feel, “Uh oh, I did something wrong. Other people don’t approve of what I did. They don’t respect me for what I did. I’ve got to change my behavior and become what they expect me to be so that I’ll have a good reputation. So, no more meditation retreats. I’m going to Bali next year. Because then when I come back to work after vacation and say I’ve gone to Bali, then they’ll say, ‘Mmm, very good.’ And then they’ll know that I’m kind of rich (because to get to Bali costs….) And then they’ll also know that I’m really cultured because Bali has many different cultures and different kinds of people. And they’ll know I’m sophisticated, and blah blah blah…. And I’ll have a very good reputation in my workplace. And that is much more important than my future life.” [laughter]

In the mind what are they working for? The reputation of this life. And future life? It’s like, out of the picture. Future life is too abstract. Liberation, enlightenment, they’re too abstract. Reputation of this life is so real. Isn’t it? It’s so real. What other people think of me is so real. And it’s so important. And all this enlightenment business, working for the benefit of sentient beings business, it’s airy fairy. It doesn’t benefit anybody. But a good reputation…. Then my colleagues will appreciate me, they’ll respect me. My boss will. Maybe I’ll get a good promotion, or whatever…. So very beneficial.

That’s what people think, isn’t it?

But of course if you look at it from the Buddhist viewpoint, all those reasons…. All the advantages that that person sees in having a good reputation, for a practitioner it’s like, those aren’t advantages. How do they benefit you at all? Good reputation doesn’t increase your lifespan. Doesn’t increase your virtue. Doesn’t get you closer to awakening. Doesn’t get you closer to liberation. Doesn’t help you (generate) bodhicitta. What use is it?

Here you can see, according to the priorities somebody has in their life, what they consider advantageous and disadvantageous for fulfilling those priorities. So practitioners and worldly people have very different priorities. What happens is most of the time we’re worldly people wanna-be practitioners. And the worldly part just tugs at us. It’s so hard to let that go, and to see that there’s really no benefit from it. So hard. Because our whole life, especially we’ve been very attached to what other people think about us. That is the most important thing.

And if you look historically…. All these honor slayings that happen now and that happened in the past? People killing each other over their honor. What is that? It’s attachment to a good reputation, isn’t it? Somebody infringed on the good reputation of my family, or my clan, or whoever it is, so I’m going to kill them. That’s pretty heavy, isn’t it? So attached to reputation, thinking that’s so important, that it’s more important than somebody’s life? But that’s what happens when we’re really immersed in that kind of attachment. Even creating nonvirtue.

So, reputation? Throw in the garbage.

The only good use of reputation is if you’re trying to benefit others, and if you act in a way that you have a bad reputation then your ability to benefit others is impinged. So that’s why there’s a bodhisattva vow—it was the one [audience] did this morning, actually—of keeping our precepts properly to inspire other people’s faith so that we can be of benefit to them. And there’s also another one that if our reputation is suffering because of misunderstanding or gossip or whatever, that without attachment to our reputation, but with the motivation to benefit people, then we should try and correct any misunderstandings.

That does not mean lie and say we didn’t do some naughty thing that we did do. It’s not saying a lie to have a good reputation. “I’m going to lie because I want to maintain a good reputation so I can benefit other people by teaching them to abandon the ten nonvirtues.” What? Excuse me? When you’re not doing it yourself? That doesn’t make any sense. But if there are misunderstandings that will impede our ability to be of benefit then we should clarify situations.

[In response to audience] That’s the whole thing about the Dharma, that our virtue is not evaluated in terms of whether other people think it was virtue or not. Our virtue is evaluated on the basis of our intention and our actions, and we’re the only ones who can really do that. Other people can think what we do is fantastic when it’s rotten. And they can think that it’s rotten when what we did was extremely in accord with the Dharma.

That’s why they say don’t be attached to reputation, but do care about what the wise say. Because if wise people are criticizing an action, or wise people are pointing out a faulty behavior in us, then we need to pay attention not out of attachment to reputation, but because we know they’re coming from a good place and they have the wisdom and compassion to benefit us. 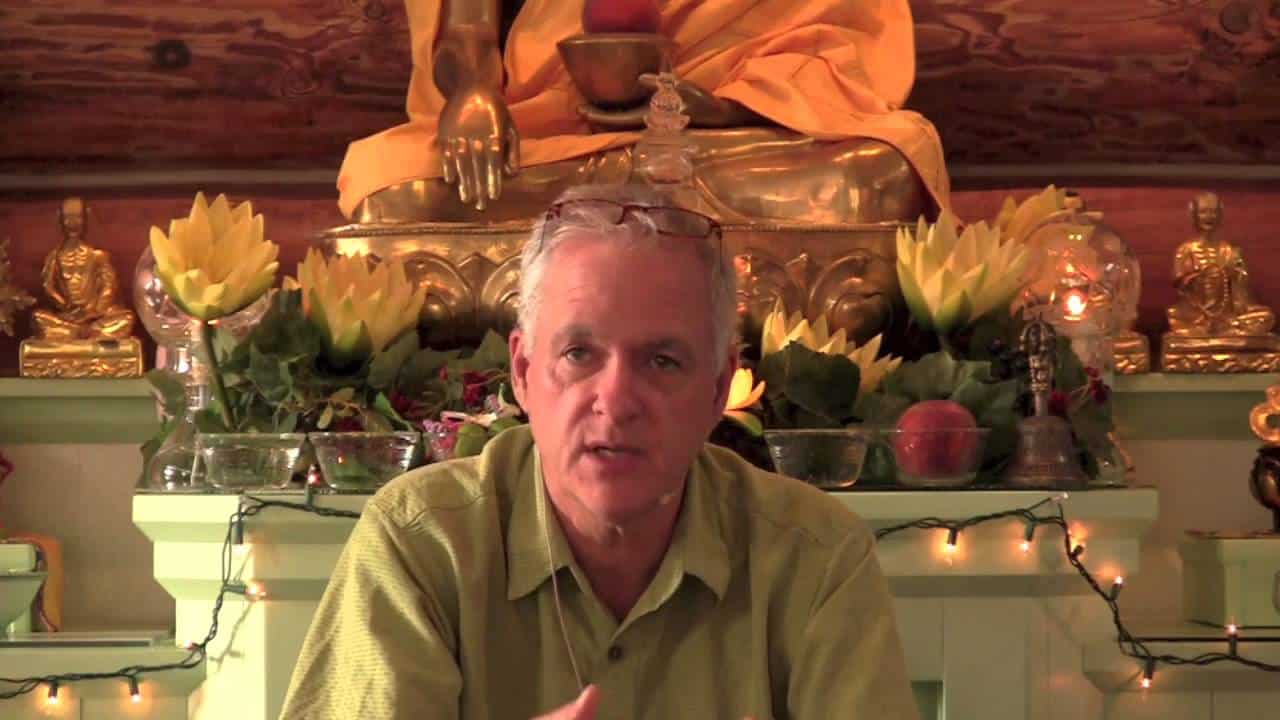 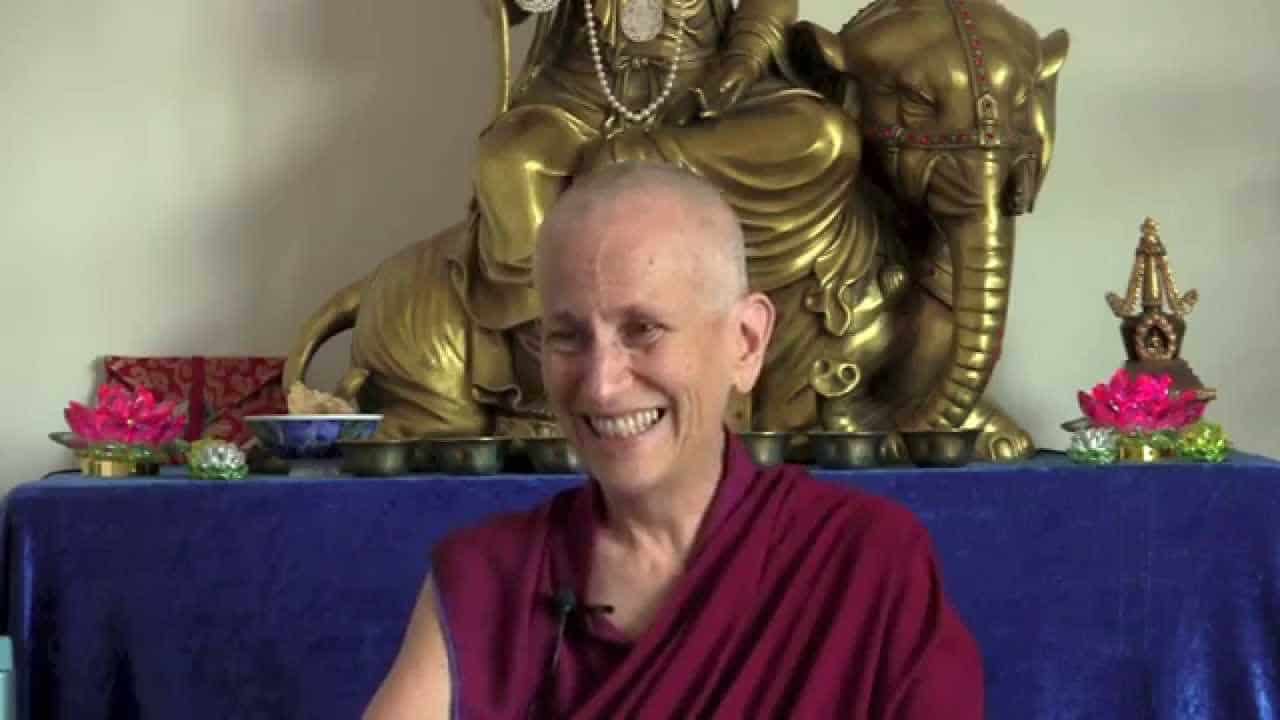 The purpose of the EML program