Who amongst those with strong self confidence need fear anything that exists?
Those who have attained to truth and are unstained by error.

“Those who have attained to truth and are unstained by error” refers to the buddhas, because they can perceive ultimate truth and conventional truth both correctly and simultaneously, and don’t see any contradiction between them. So when we have that deep understanding of how things exist then there’s nothing to fear whatsoever.

When they talk about the Buddha they have different sets of qualities of the Buddha and one is that the Buddha is fearless. And there are four different kinds of fearlessness. But it’s interesting to think, here’s the Buddha fearless when fear and worry and anxiety rule so much of our lives.

The Buddha also said that somebody who fears something that they don’t need to fear is a fool. And somebody who doesn’t fear what they should fear is also a fool. If you look at it: somebody who fears things that need not be feared. What are examples of that? Other people’s opinions of us. And yet how much of our time and energy is taken up worrying and being afraid of what other people think about us? When you think about it…. It might be very interesting to really kind of jot down how much time you spend thinking about different things. Like “this person’s mad at me. Oh no.” “This person thinks I did something I didn’t do. Oh no.” “This person thinks I’m an idiot because they asked me a question. Oh no.” “This person thinks dah dah dah dah dah….” You know? How much time we spend worrying and anxious about what people think about us. But is that something that is worth worrying about? Not at all. Not at all. And yet we’re so completely worried about, “Do they approve of me? Or do they disapprove of me? Are they praising me? Are they blaming me? Do I have a good reputation? Do I have a bad reputation? Are they accusing me of something I didn’t do?” And we’re so afraid. And yet that’s not something that’s really worthwhile being afraid of.

Similarly, just think in your life of all the things that you get afraid of that never happen, and that there’s no real good reason to be afraid of those things. Like you have a stomach ache and then “Oh! That means I have stomach cancer, I’m going to die.” Little bit exaggerated. You know? But when you think (in our lives) on the basis of some tiny amount of evidence we go through and come out with some amazing conclusion that then terrifies us. And none of this is likely to happen, it’s all just due to our imagination.

On the other hand, the things that we should be afraid of—like creating negative karma and falling into the lower realms—that doesn’t even enter our minds. When we’re angry we never think “Oh, I’m destroying merit by being angry.” Do you ever think that when you’re angry at somebody? Do you ever stop and think all that merit that I created meditating, doing generosity, keeping my precepts, I’m destroying it by getting angry at this person. Do you think that? If you really believe in karma it stops the anger immediately. Because it’s like, why am I going to waste my merit on this idiot? [laughter]

[In response to audience] That thought may have already been there, so then you purify. But at least you cut it. Because so often the thought comes, if we don’t cut it it goes on and on, and for two or three weeks we’re in a foul mood with everybody we see. Because once we get in a bad mood why stay angry at one person when we can be in a bad mood and get angry at the world? You know? And then pretty soon everybody around us is like [pushes away]. And meanwhile we’re destroying our own merit.

Fear doesn’t mean paralyzed in fear. “Oh, I’m so afraid of generating attachment! Ahhh!” Not like that. But you just are aware of what happens when the eight worldly concerns play out, when the afflictions arise, and it’s like this is not going to take me in a good direction. And I have concern…. I dread the kind of result that it’s going to bring. And so then that really helps give us a firmer, clearer mind to restrain not only physically and verbally, but also to cut it in our minds.

[In response to audience] But first we have to have some wisdom that can discern what to practice and what to abandon on the path. If we don’t have that wisdom then we don’t know what’s useless to be afraid of and what is worthwhile to be concerned with. So that’s why it’s so important to hear teachings and to think about the teachings, and to check them and make sure that they’re true. And then we’ll know what to practice and abandon, and then we can choose our fear correctly instead of our fear just coming up and completely overwhelming us and leaving us like a babbling idiot who can’t think straight. Because that’s true, isn’t it? When we get terrified we cannot think straight. Where does that get us?

[In response to audience] Okay, so you get angry at somebody else, then you apply some kind of antidotes…. But you see, you’re not really applying the antidotes. What you’re doing is saying, “I shouldn’t think like this. I shouldn’t feel like this.” If you really apply the antidotes then that thought disappears and there’s no anger energy left to turn in on yourself. But if you’re just intellectually reciting “Oh, that person’s kind because they gave me a cup of tea and blah blah blah,” you’re not really believing it, so you have that anger energy and what you’re really doing is saying to yourself, “I’m a bad person for being angry, I’m a bad person for being angry….” and then you’re stuffing your anger. And stuffing your anger and applying the antidotes are very different.

When we notice afflictions arise there’s no reason to get mad at ourselves. Because that only compounds the problem, doesn’t it? And makes us really not think clearly.

[In response to audience] Right. Thank you for raising this. It’s very important that we practice all these antidotes in our meditation. Not just repeating them mechanically but actually contemplating them so that our whole perspective changes. And in that way integrating those antidotes into the way we see the world. Because in that case then the antidotes work. When we’re only intellectually saying it, then at the bottom of it is, “I shouldn’t feel this way because, oh yes, it’s really my karma coming back on me, there’s no reason to be angry at this person, and I’m destroying my merit by being angry at them, blah blah blah….” But we’re not really believing it. All we’re doing is basically saying “I’m bad for thinking or feeling the way I do.” And that’s not the point.

It’s really important in our meditation to meditate on these things long enough so that it really generates some feeling and our perspective really begins to change. 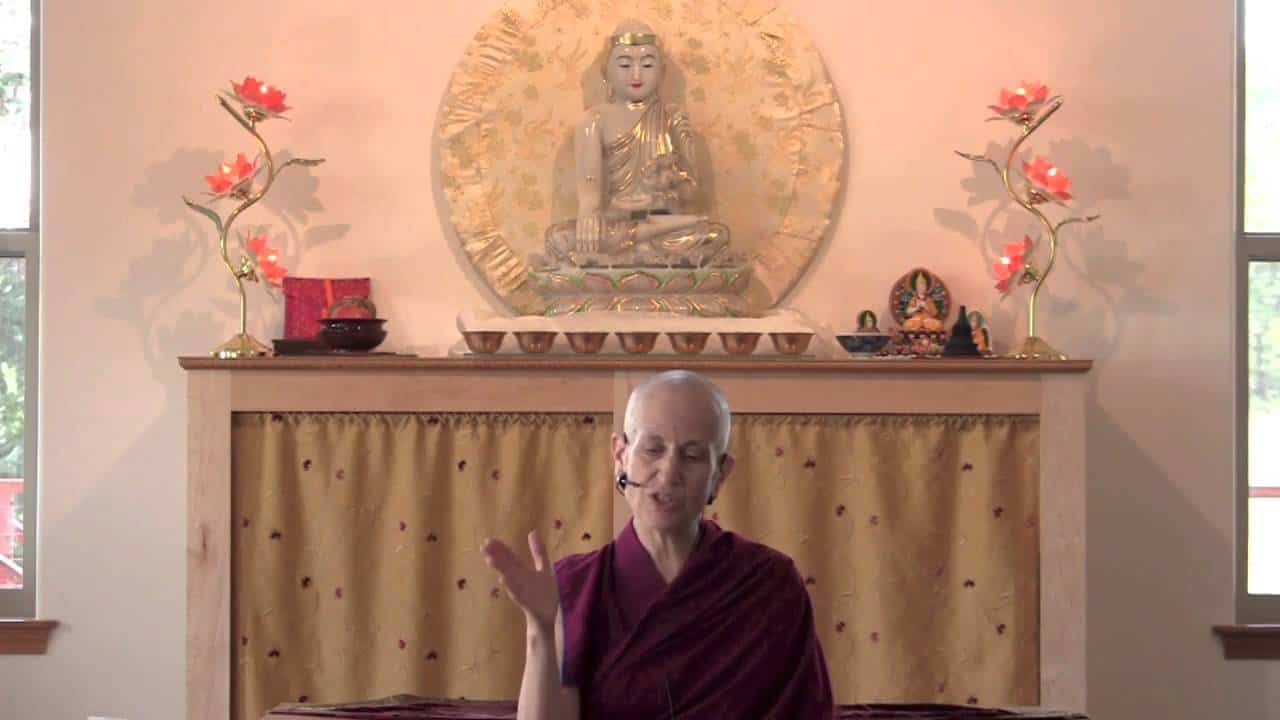 Verse 76: The power of spiritual integrity 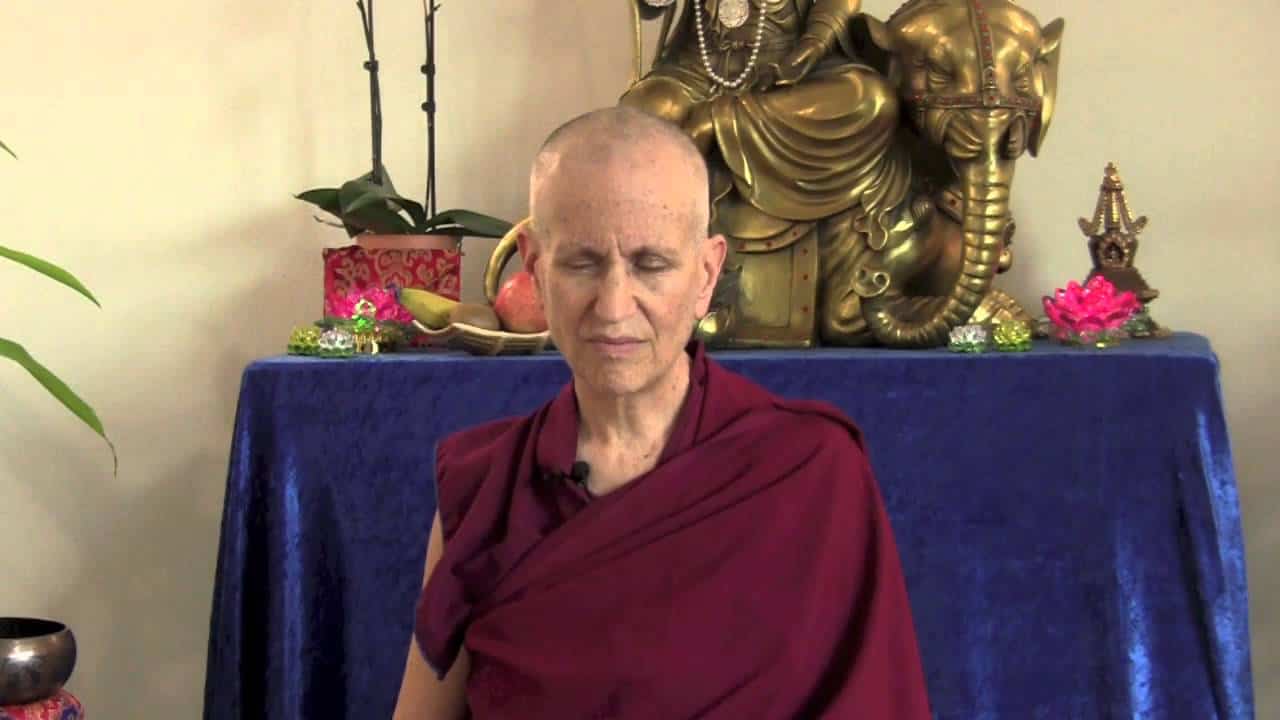