The wisdom of fear

The wisdom of fear

Okay, so we began talking about fear yesterday and I think it’s good to note that the word fear doesn’t always have to have a negative connotation. The way it’s used in Tibetan, remember yesterday I was saying it’s the word jigpa, it can often have a positive connotation.

Of course, we associate the word fear with being panicked, with being freaked out, and so then if we hear being afraid of being born in the lower realms we go back to being six years old in Sunday school and being threatened with going to hell if we steal an M&M. And so, that’s not the meaning in Buddhism, okay? And I bring this up because so often we take Christian words or Christian concepts and bring them onto Buddhism when Buddhism is speaking about something similar, but not exactly the same. And so, this is one of those cases. Because in Buddhism, when you are aware of the danger of being born in the lower realms that makes you much more cautious about your behavior, much more mindful, much more attentive, and it results in the mind becoming more focused and tranquil, because it wants to do something virtuous, okay? So, whereas the word fear, if it’s taken to mean panic, you know, like “Ahhhhhh, I’m going to be born as a cat!” and “I’m freaked out about that and I don’t want that to happen so I’m going to squeeze and pressure myself to practice the Dharma”. And that doesn’t work and that’s not what the Buddha is trying to get us to do, okay? So, we have to be very clear about that. Let’s use another example: if you are merging on the freeway, okay? Do you have a sense of the danger that is there if you aren’t paying attention? I hope so! Otherwise I don’t want to ride in the car with you! You know, if you have no awareness that merging on the freeway has some danger, excuse me, I’m not going to ride with you. So, that kind of awareness of danger is something good, isn’t it? Yes? Now, if we use the English meaning of the word fear, are you afraid of merging on the freeway? No, you know, some people may be, you know, when you are sixteen and you have your parent’s car. Well, either then you are afraid or you don’t see any danger at all. Okay, but most people as mature adults, you wouldn’t be freaked out with the merging on the highway, but you would be aware that there is some danger.

Translation of fear in Buddhism

So, in the same way, the word fear in Buddhism, if it’s translated literally, maybe should be translated as awareness of danger, instead of as fear, so it doesn’t bring the English connotation. But, that is the meaning that we are aware of the potential to experience suffering. And being aware of that potential then we want to avoid the causes, creating the causes for it and we want to purify any causes we’ve already created. And that kind of awareness of danger, or if you want to call it fear you can, is something useful and beneficial. But it’s completely different than the freaked out panicky uncomfortable fear, which is of absolutely no benefit on the path. Okay? So, I say this, you know, so that we maybe can open our mind a little bit about what fear means in different contexts, if we choose to use that word. Or about possible other translations of it, like awareness of danger. Okay? And then we’ll continue on tomorrow with some of the freaked out ways of fear. 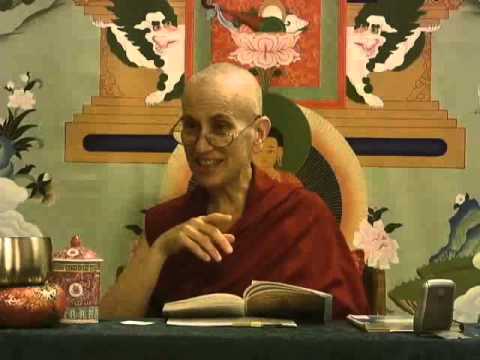 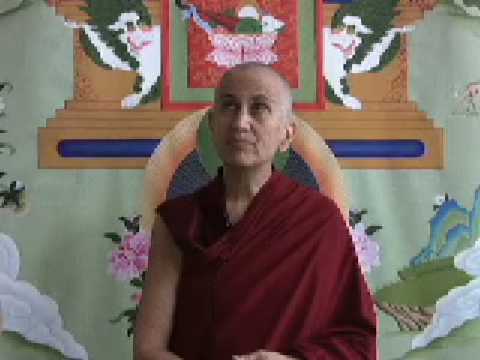