What effort can be made that will bring about some benefit?
Any effort if it is made with conscientiousness and graced with forethought.

Means with conscientiousness and forethought. [In response to audience] Thinking about something before you do it. That’s what I’m going to actually talk about.

This conscientiousness is the opposite of recklessness. Recklessness is just impulsive, saying whatever comes out of our mouth, typing whatever we want into an email, sending it. Doing physically whatever pops into our mind in the moment. That’s lack of conscientiousness. We’re not thinking about the effects of our actions on ourselves, or the effects of our actions on other people.

These two things, conscientiousness and forethought, prevents us from being impulsive. Impulsivity is something that we often suffer from, especially when the mind is under the influence of an affliction. So the mind is uncomfortable or dissatisfied (wanting something, whatever), and so an idea pops into our mind of what to do, how to get what we want, or how to get rid of the circumstance we don’t like, and without thinking about the effects on other people, without thinking about the effects karmically on ourselves, just impulsively doing something. Do you know what I’m talking about?

[In response to audience] No! [laughter]

[In response to audience] Oh, I have many examples.

I have one situation where I really saw it, where my friend was using somebody else’s car (the other guy was in India) and the hood would fly up (open). And I told my friend, I said, “You’ve got to have this fixed. Now. Immediately.” And he said, “No no no, it’s no problem, I just chain it.” Well, one day we were supposed to meet at some time before Dharma class or something, I don’t know what it was, he didn’t show up. So like an hour, hour and a half later he comes and I say “what happened?” And he said, “I was driving on I-5 and the hood flew up.” I-5, the major highway going up the west coast. And the hood flew up. And I got so mad. I said, “My goodness, I told you before to get this fixed and you’re so irresponsible,” and etc…. So what I really meant was, “I am so glad you’re alive!” You know? “I’m so glad you’re alive and I care about you.” But what I said was out of anger and it pushed him away.

We see this so often. What we want is to have friends, but we act in ways that push people away from us. And then we wonder why we have problems in our relationships. But we always blame the other person. We never think it has anything to do with my behavior. Right? It’s always the other person. But it’s due to our lack of conscientiousness and forethought, so we often do things that push people away when what we want is to be close.

Venerable Thubten Tarpa: Well this week I said some words impulsively when I was angry. I haven’t done that, actually, in a few months, which is fantastic. But the flavor of it reminded me of something that I did nine years ago here, when I was talking to you [in audience] and I’ve been trying to figure out what…. It’s kind of one of these tricky things where there’s truth in the words, but it’s not okay. You’re trying to handle something that you don’t know how to handle. And you say something that just causes hurt in the other person. And so it doesn’t really work. That’s my example. So the impulsiveness is lacking both those factors completely. So, I don’t know if that’s a good example, but…. It was impulsive.

I’ve done a few other things that were impulsive, too. Actually, when I moved here I didn’t think I was an impulsive person because there are certain categories of things where I’m not impulsive. But I’ve learned that there are whole other categories of things where the affliction is so strong that I actually can’t control my behavior. In that way I’ve found the NVC [nonviolent communication] helpful because I recognize sometimes when I analyze things I can find out what my buried needs are that are actually making impulsive behavior.

Venerable Thubten Semkye: My impulsiveness is disguised in the flavor of “getting things done.” It was a few years ago I was asked to put up a gate down on the lower road, and I took two of our dear guests with us to do this. I thought it was going to take a few hours, maybe two or three hours. We went down about nine o’clock in the morning, thought we’d be back in time for lunch. Well, once Semkye gets going she just got fired up about this gate and decided we’re just going to work through lunch. Not a problem. It’s taking longer than I thought, we’re all kind of getting gung-ho and saying “we’re going to just do this.”

Well, unbeknownst to me, the entire community thinks that we’ve driven the car off the side of the cliff because I failed to tell the community that we’ve had a change of plans due to some difficulties. So we’re out there just kind of tooling away, and then I go take them (rather than getting right back to the Abbey, because now I’m happy the gate’s done) and I’m going to give them a tour of the forest. So I take the truck, we go down to the other part of the property, and I’m showing them the boundaries. Meanwhile Venerable Samten and K are out looking for us thinking we rolled the truck down the cliff and now we’re in some ravine somewhere.

So K comes and says “Semkye, you are so busted.” That was the first response out of K’s mouth when he finally found us. I’m like, “What K?”

So I got taken to the Venerable Abbess and told, because it was this enthusiasm, this impulsive propensity to get things done and just hang in there until it’s done, not thinking how my actions affect other people, especially when you’re living in community. And of course R and J, they’re kind of hooked into my enthusiasm, they probably would have preferred to go to lunch, but they weren’t going to tell Semkye “no.”

So I learned that it’s better to communicate. It’s better to be realistic about what can be accomplished. And there’s always tomorrow.

And K…. Every time I looked at him for three months after that he’d go,”You’re busted, you’re busted!” [laughter] Which was one of the dearest things K has ever said to me. [laughter]

The monastics of Sravasti Abbey endeavor to live generously through dedicating their lives to the Buddha's teachings, practicing them earnestly, and offering them to others. They live simply, as the Buddha did, and offer a model for society at large, showing that ethical discipline contributes to a morally grounded society. Through actively developing their own qualities of loving-kindness, compassion, and wisdom, the monastics aspire to make Sravasti Abbey a beacon for peace in our conflict-torn world. Learn more about monastic life here... 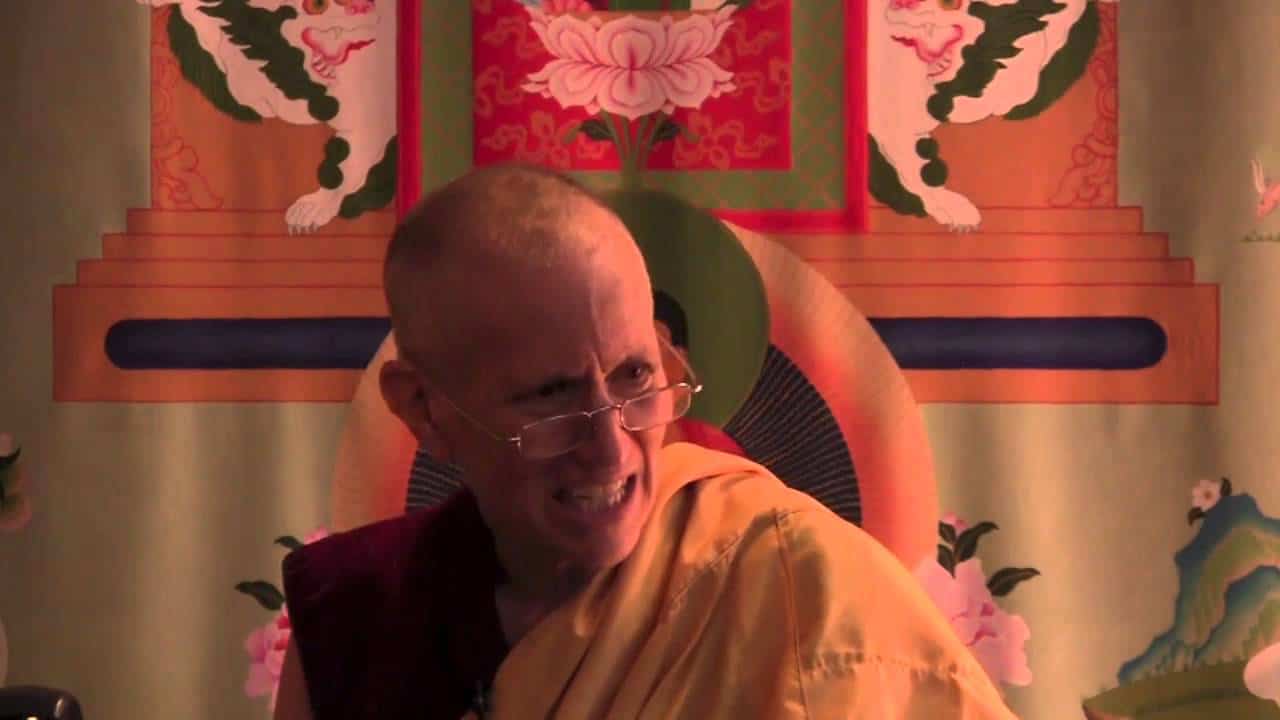 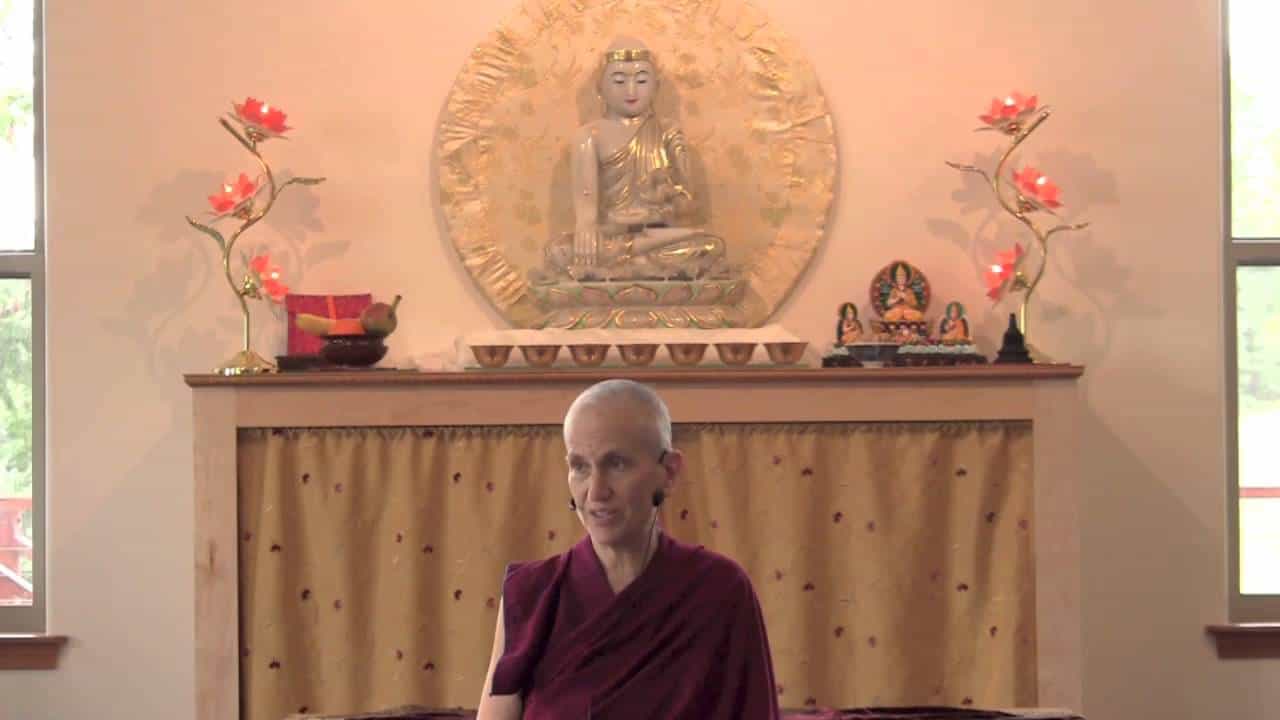