This has made me think, and I’ll share my ideas with you: it’s not just that the seed is called a cause, and the sprout is called a result. But there’s like inherently a seed and inherently a sprout. This basis of designation does not really become a seed, worthy of bearing the name seed, unless there’s the potential to produce a result—unless there exists the potential for a result in relationship to it. This thing over here doesn’t actually get labeled a sprout, or become a result, without the seed. In other words, it’s not like each thing has some other identity that is inherent in it; and just the cause and effect part is labeled in relationship to each other.

They also give the example, of course, like long and short, tall and small. Here in the US, I’m considered on the short side. I go to Singapore and I’m a giant. These kinds of things, so many kinds of things, are designated in dependence upon each other. I think in the way that we talk about karma, too, like why is something called a constructive action? It’s because of the result that is produced, not because inherently it’s a constructive action. The Buddha looked at the results, and said, “Oh, we’ll call the names of the things that cause this kind of result constructive.” When there was suffering and misery, he said, “Oh, we’ll call the names of that destructive.” The constructive and destructive karma got their names in relationship to the kind of results that they produce. I think this is a very different way of thinking about ethical cause and effect than you get in some other systems; where there was an external force who decided what was good and bad to start with, and then you got punished and rewarded in response to those. In that line of thought that’s the dependence just asserting, “You do this, you get that.” In Buddhism, the relationship is, “What kind of result is it?” and we label the cause in dependence upon that kind of result.

As we think about that, this is where it really changes our mind. It’s then not a thing of, “I’m going be good, so I don’t get punished.” Or, “I’m going to be good so I get rewarded.” Now we actually understand, “Okay, these are the kind of results, and this is called negative because of the result it produces. I don’t like that result, so I’m not going to create the cause.” That brings us totally out of this reward-punishment kind of mode, which often can be very limited in its way, or can feel very confining. When we see it in terms of the result then it becomes a sense of, “I want happiness and therefore I’m going to do the things that bring it. I don’t want suffering and therefore I’m not going to do the things that bring it.” It is a whole different mental feeling.

Audience: One of the things that I have been thinking about with the Dharma refuge this winter, is that taking the external person who makes this all work. I have found it to be really empowering that I have the decision, I have the power, to decide what causes I want to create if this is the kind of results I want to experience, rather than always feeling like I’m at the mercy of something that I don’t even understand.

Venerable Thubten Chodron (VTC): Right. So, you are saying that this view actually empowers you because then it is your choice to create the causes for what you want to experience. There is nobody else dishing things out.

Audience: I was thinking along the same line as that. It’s so fluid then. It’s so fluid because you can take something that most people label a negative problem, like getting really sick, and because of mind training transform it and it is not a suffering or a negative.”

VTC: Right, yes. So this fluidity, when you get sick you can do taking and giving, and say, “This is something good.” Then it becomes that way in our own mind.

Audience: Where do parts and dependence on parts fit in this scheme?

VTC: I have had that same kind of question. I asked Thubten Jinpa about it and he was saying that it fits into this dependent designation one. Here it takes it a step further because when you just think of dependence on parts in the first system, it’s the whole depends on the parts. However, when you think of it in terms of dependent designation then the parts depend on the whole. In other words, something does not become an auto part unless there’s the auto, or the potential of there being an auto. It’s not just that the car depends on the parts of which it is made. But the car parts are not car parts unless there’s a car. It doesn’t mean that when the car parts are in the store, and there are just a bunch of wheels standing there, that they aren’t car parts because they’re not part of an actual car at that moment. It means that because there is the potential to make a car out of them, they become car parts. So you have this thing of things going both ways.

It is quite interesting in Aryadeva, in his Four Hundred Stanzas. He talks about leaders not getting arrogant because they need to realize that they are only leaders because other people happen to be followers. There is nothing in their position, in and of themselves, that make them special, or this, that, or the other thing. There is a social relationship. Because you have both components of the social relationship, and different definitions for each, they depend on each other. Neither of the social relationships exists inherently.

You can see this in many kinds of organizations. Somebody may be a leader in relationship to some people, but a follower in relationship to other people. People only have their relationships in terms of the other people playing the game, but none of these things are concrete at all. They are all totally dependent on each other. Again, I think it’s very helpful to think of this because then we don’t put people in very concrete positions and say, “Oh, they are just this; that is all they are, is this.” They exist in different ways and different situations, and they exist that way in relationship to me. I exist in a certain social role in relationship to them. It is like parents and children: you don’t have the parents unless you have the kids, and you don’t have the kids unless you have the parents. They are dependent on each other. There are different social roles according to each one, but they are very much dependent.

Thinking like this cuts down a lot of our anxiety in how we relate to people of different social roles because we realize the whole thing is dependent and that there is nothing concrete in the whole thing. 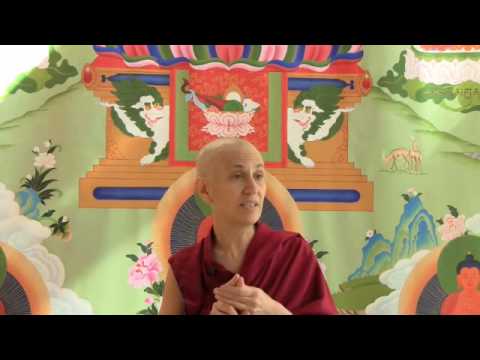 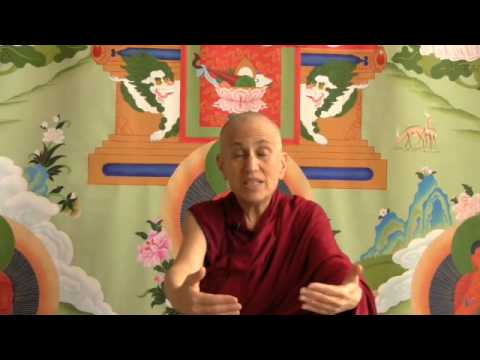