Somebody is saying [question from a retreatant]: “I am puzzling over how my wisdom realizing emptiness appears as Tara’s body. Or can it appear as anything? Shouldn’t the object of that wisdom be emptiness, in which case, shouldn’t emptiness be what it appears?”

The idea here is that you are thinking of your wisdom and the subtle energy or the subtle wind that is one nature with it. The wind is actually what is manifesting as the body. Now, of course, this is kriya tantra, so it doesn’t have this exact explanation, but if you understand highest yoga tantra, you can understand this better.

You don’t want to get hung up here. If wisdom is a mental factor, and it’s a consciousness, and it doesn’t have form, how can it appear as Tara’s body? Yes, that’s right. Here we are thinking on the level of an extremely subtle mind and wind energy that are one nature; and so that appears as Tara’s body.

That is why it appears as a body of light. It doesn’t appear as this kind of body [indicating our human body] because this kind of body is not one nature with our gross mind. They are completely different natures. The reason that you are doing this, and seeing your wisdom appear as yourself in the form of Tara, is that you are trying to see the two truths at the same time. When somebody is in meditative equipoise on emptiness, then emptiness is the only thing that appears. Only the Buddha has the ability to see the two truths directly at the same time. Here, by thinking that that wisdom appears as a form, you are also training yourself, at least, to get the idea into your mind about seeing the two truths simultaneously. That is what we want to be able to do at the time of buddhahood.

In addition, when you label “I” on the deity’s body, what is the basis of designation of the label I? It is not this body, is it? It is not our gross mind. Those things are shed. They aren’t what transform into the dharmakaya and the rupakaya according to tantra.

You are thinking of that when you appear as Tara. Don’t think that this body has become Tara. This body is not going to become Tara. I heard somebody once say, “Oh, you practice and practice, and then you look down and one day your body is the deity.” No! That’s not correct. This is what we’re doing. Somebody could come back and say, “but I thought we are supposed to be training to see everybody as deities, so why shouldn’t I be able to look at my body and see it as the deity’s body?”

Question: Someone has asked about the indestructible drop and how does it relate to what was said about the subtle mind and body.

Venerable Thubten Chodron: The indestructible drop is a drop at our heart. There is a gross one and a subtle one. The gross one contains elements from our mother and father, and it came about when we were conceived. When the winds and the minds that ride on them are dissolving at the time of death, a person is losing touch with the outer world; they are all dissolving into that indestructible drop. Then the actual time of death is when the consciousness leaves that drop. 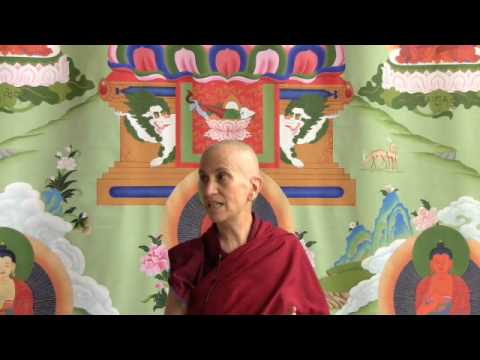 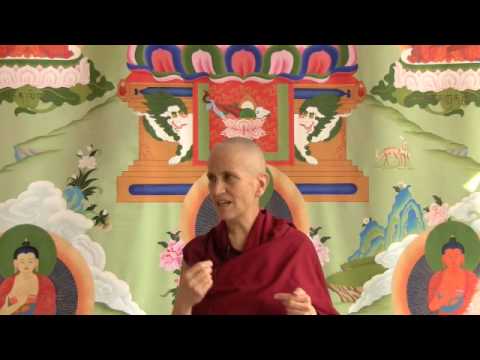