The question from yesterday is continued: “Is it correct to think that within the concept of Tara which I label ‘I’ is exactly the same process by which I can see an inherently existent (whomever) and label ‘I’?”

It better not be. The whole point of generating your body as Tara is that you don’t grasp at an inherently existent I. This is why it is so crucial that you do the meditation on emptiness before the self-generation. Otherwise, if that’s not done and if you don’t think about emptiness, then even if you generate yourself as the deity, then there is the latching on to [the thought]: “I am Tara.” That is where you sometimes see people go off the deep end, and they really start believing they are the deity. They have some mental disturbance and at that point, that is because they are grasping at themselves as a self-existent deity. We don’t want to do that at all; that is BIG trouble.

There are times when we’re not grasping at a truly existent I. At that time, there’s the appearance of the aggregates, there’s the labeling of the aggregates, and then there’s what is called a valid mind apprehending I. When you regard that I as the focal object and grasp it as truly existent, then you get the view of a personal identity–a grasping on to yourself as truly existent. You don’t want to do that as the deity because then nothing has changed. The whole idea is that you dissolve into emptiness, and by that wisdom appearing in the form of the deity, which keeps you focused on that appearance of the deity–is just an appearance. It is not truly existent. It is not a truly existent deity body. It is just an appearance, like an illusion. Then, in dependence upon that appearance there is the label “I,” in dependence upon the deity’s aggregates you label as “I.” You then try and stay with that in your meditation. If you go to the point of, “I am a truly existent deity,” then it’s the same as being a truly existent Mickey Mouse–except you just look a little bit different.

Can you see what we’re doing in the self-generation? We want to make it different than what we are doing in our normal life where there is this appearance of: (1) the aggregates we grasp as being truly existent, (2) we label “I” and then, (3) we grasp that I to truly exist. We have to defend that I. We have to protect that I. We have to make sure everybody notices it in the way we want people to notice it. We do all of those kinds of things. That is where dukkha comes from.

The merely labeled I

Audience: What I wanted to try to compare is if I realize that I’m labeling on the appearance of the deity, this I, if I were able to do that with the conventional appearance of my own aggregates, could I compare those things?

Audience: I was thinking that, here I am deliberately doing this. If I can be aware of what I’m doing, the process of the deliberate evoking of this image that I put a label on, then I can be aware of how that is different from the innate unconscious labeling and the grasping when I do it to myself.

VTC: Yes, if you can be aware of how you are labeling I in dependence on the deity’s aggregates, this can that help you see that in your regular life when you are labeling I on your regular aggregates, that then you also take the additional step and see that as an inherently existent I. It could. Yes, you can also do that with trying to see how you label I, and then how you grasp that same I as inherently existent.

If you want to examine this process by which self-grasping or grasping at true existence arises, I think it might be more effective to look at something, see it, all of the parts involved in it. Really go through and notice all these different parts. Then see how the mind puts the parts together through a conceptual process and calls it whatever it is; and how after we call it that, without even being consciously aware, we then think it’s that from its own side. That’s the grasping at true existence. I think that watching that process is very helpful.

The five aggregates—basis of designation

See how you do that with other people; how it seems when you look at somebody else, that there’s a real person inside there. Actually there is just body, feelings, discriminations, different conditioning factors, and different consciousnesses. See all of those different things. Then see how the mind puts them together and then not only calls them (something), we call it “person.” It is very soon after, that there is a real person out there that is in addition to the aggregates. It’s not just the aggregates. There is something in addition to the aggregates. (Just like) there are not just the parts of a tree. There is something in addition to that. See how we hold that thing that’s in addition to what is there, with the parts, as coming from the side of the parts—existing somehow within those parts—being fused with them in some way but not totally fused. I think that’s a good way to get an idea of what inherent existence means and how that process of self-grasping arises.

When you do that with other people, look at it. Also do it with yourself. You can start just with your body and really look at different parts of the body. There’s no body there. There are just arms, and legs, and tissues, and this and that. That’s what is helpful about doing the body meditation. There are just all these different organs and tissues and limbs. You then put them together and the mind makes them a “body.” The next moment, there is really a body. Then, of course, we get into that body which is another step.

There are the five aggregates of which the self is composed. See the different aggregates. See how mind puts them together and says, “me.” How as soon as we say “me” we go into self-grasping, don’t we? That comes so quickly. I think that’s a good way to watch how this process occurs.

How the feeling of “I” changes

Audience: I find it also interesting, how when I am meditating, usually when I first sit down, the label “I” is on the body and mind, but once I have really calmed myself, it ceases to be on the body. It is more just on the mind. Then it’s, “My body is just a body; it is not me.”

VTC: Until your body hurts.

VTC: Very often, the body falls away a little bit at least. However, then it seems like the I is closely related to the mind, doesn’t it? “I don’t like this; I want that.”

Audience: I see that after awhile, all the storytelling becomes the sense of self. All of the conceptualization that I tell myself, the observations, the judgments, the fantasizing of stuff, that then becomes this person, me. It’s like: “She’s so much a part of her thinking.” Because the body does fall away, I am almost disconnected to it and I am only in my mind.

VTC: Then, see how we use our past to create this sense of self and hold onto those stories because those stories give us an identity now. We get all involved in the stories, for example, what you were saying, in a story about Amsterdam in the 70s. Somehow that is creating the sense of I right now; like, “I am the one who … ”

Audience: We are addicted to it. It is so powerful to rein the mind away from those stories. Then for me, I have a sense of: “Who am I?”

VTC: Right, who am I? That’s why, when you become a monastic and you give away the things that you had as a layperson—sometimes it takes people a while to do that. [It’s] because they’re still very attached to that sense of I. As you give those things away, you lose that attachment to being that person. It does leave you, sometimes, a little bit up in the air. “Well, who am I? If I am leaving that identity of so-and-so who liked this, and did that, and was friends with this one, and was the victim of that one, and the person who had all these friends that loved her, and all these people that hated her, then, if I leave all of that behind and just let it go, who am I going to be?”

Audience: Then, you will be the identity of being a monastic. It is almost stronger than (any) years spent in the past …

Don’t worry about it. It could easily happen when somebody is leaving behind an old life, an old identity, and then creating a new one. We latch onto it.

Audience: For me, after letting go of all the physical stuff, then there are the memories that were produced by the objects. Now, I’m finding that I’m dealing now with the memories. How that is the part that now has to be let go. They are just thoughts. They don’t exist. There is nothing there.

VTC: Yes, right. It’s what we were talking about before. Our addiction to those memories and thinking about them again, and again, and again in our meditation, and how thinking about somebody else’s memories, or somebody else’s past is so boring. This would be [a] very good [exercise]: “you” write out your memories, give them to “her/another person,” and every time she starts getting into her memories, she has to take out yours and read them, and get into your memory. Then we will see how long that lasts. Then you can think about her memories. You can really see that it is really quite boring. It’s as if that is the past and that happened; it is interesting in the beginning, but if you keep thinking about it, it is really quite boring. She [that other person] is smiling, she is not so sure.

Audience: You know what I have been doing is: I have been taking the memories and replacing the people in my memories with the people of the present. Ah, there are all sorts of conjecture going on here. I should have been a playwright. 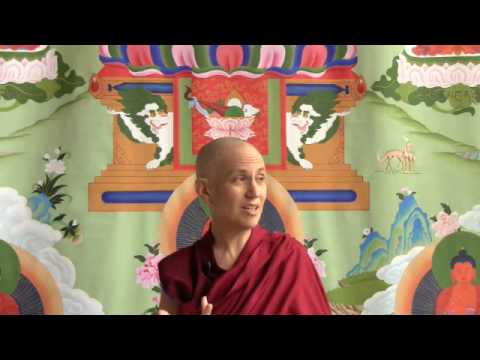 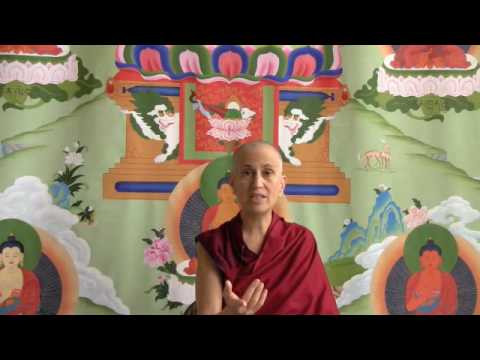