Green Tara Retreat 024: Why it is important to think about emptiness (download)

We’ve been talking a lot about emptiness. I should explain why it’s important to think about emptiness. Unless we understand this then, because the topic is not immediately so clear to us, we won’t have any energy to put into it, and yet it is quite an important topic.

They don’t just happen out of nowhere, causelessly—they have causes. In Buddhism we say that these things happen due to our karma—it is due to the actions we have engaged in physically, verbally, and mentally in the previous times. In other words, we create our own experience. There’s not an external being who determines or creates our experience or even our existence. Our own actions do that. Where do our actions come from, especially the negative actions that make us have so many problems? These come from afflicted states of mind: when we have a lot of greed or clinging, when we’re jealous, when we’re angry and spiteful, when we want to get revenge, when we’re deceptive, pretentious, or conceited, or whatever. These mental states are the things that motivate us to get involved in actions that are damaging to others and damaging to ourselves as well.

This is what I was talking about, which is so hard for us to realize. We’re so used to things appearing objectively existent out there, that we never question that appearance or think that maybe the appearance is something false. Maybe they are not objectively existent in and of themselves. It’s the ignorance, which sometimes is called self-grasping ignorance, or grasping at self-of-phenomena, or grasping at self-of-persons, or even view of the transitory collection, or view of the perishing aggregates—all of these terms refer to as they share the same thing in common in that they’re all ignorance. They all misapprehend their object, thinking that their object, whether it’s the self, or our mental or physical aggregates, or other things, exists in the way that it appears. In other words, they appear objectively existing out there and we grasp that appearance as true.

That is what ignorance falls onto. From that ignorance then the afflictions arise. Why do we get attached? Because we think, “That’s a real thing out there and it has real happiness out there. And there’s a real me in here and I want it.” Or, why do we get upset? It’s based on the view, “There’s a real thing out there. That real thing is also causing me real harm. There is a real me here that’s going to get damaged from it.” All these afflictions arise based on the ignorance.

Ignorance perceives things one way. The wisdom realizing emptiness perceives things in the exact opposite and contradictory way to how ignorance perceives it. That’s why realizing emptiness is important. If ignorance is grasping things this way, and you can realize that that’s totally wrong and develop the wisdom that understands how things actually exist. Because you are understanding reality as it is, ignorance is not going to be able to get maintained in your consciousness.

You have to familiarize your mind with that realization of emptiness again and again and again, so that it wears away gradually the ignorance until there comes a point when the ignorance and also its seeds are completely eliminated. That’s the state of liberation. At that point the afflictions don’t arise anymore at all. It’s impossible for them to do so. Also then you don’t create any more of the karma that causes rebirth. Without that karma that causes rebirth then there’s none of the suffering results of rebirth in cyclic existence.

That’s why realizing emptiness is important. It has the ability to cut the root of ignorance once and for all, and make this whole sandcastle of samsara completely crumble. That’s why, even though sometimes when we talk about emptiness it might be difficult, then you think, “Oh, this has the ability to free me from all of my suffering.” Then you say, “Well, difficult or not, staying in samsara is more difficult than learning of that emptiness. Therefore, I’m going to put my energy into it.” Think about it: staying in samsara again and again is pretty hard, so anything is going to be easy in comparison to that.

Working on our attachments 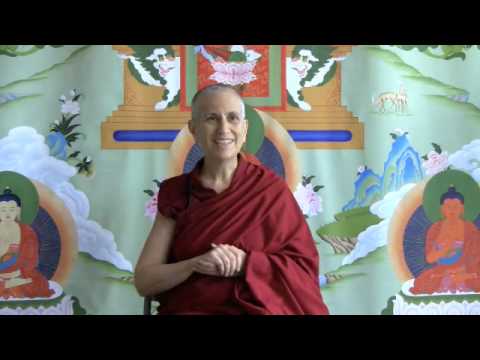