Green Tara Retreat 19: An explanation of emptiness for those new to the topic (download)

[Responding to written question from the audience]

We have one question here that’s in probably [type size] five font: it’s almost empty itself.

So somebody is saying, “When emptiness is spoken about my head spins having had no teachings whatsoever on emptiness. If emptiness could be explained to me or to the rest of us in a few short explanations, then we could follow these teachings. Emptiness is … what, Venerable?”

Please know whoever wrote this, you aren’t alone. Even the people who’ve heard it many times don’t understand it well because it’s not an easy topic. If it were easy, we would have already realized emptiness; we would have already attained liberation and enlightenment. It’s not an easy topic. The first few times that we hear it we are just getting used to the vocabulary. Then you get to notice some words recurring, and then you try to figure out some of the concepts behind the words. You’re just trying to get an intellectual understanding at first of the basic thing that’s going on. Then, as you go on, you start investigating it more and then looking at your own experience, and looking at the things around you—then you get a much deeper understanding of it.

Basically what emptiness means: it’s a lack of fantasized ways of existence. In other words, due to our ignorance and the latencies of ignorance on our mindstream, when we apprehend phenomena they appear to us as if they existed from their own side, independent of every other kind of factor. We look at something:

“There’s a chair. Out there. Objective.”

“There’s another person. Out there. Objective.”

“There’s somebody who’s nice. Their niceness is objective.”

“There’s somebody who’s not nice. Their obnoxiousness is objective.”

So we think that things have some kind of inherent nature that makes them these entities that they are, in and of themselves, without depending on anything else. It’s precisely this that the teachings on emptiness are saying doesn’t exist. It’s not saying phenomena don’t exist, but this inherent way of existence that we have projected onto them does not exist.

The hardest part about the whole thing is figuring out what inherent existence means because we are so used to perceiving it that we don’t even see it. And in our minds, it’s so mixed—inherent existence and just regular, conventional existence—that we can’t figure out the difference between the two. We’re just so used to this: we open our eyes, our ears, our senses function, even our thought processes—how things appear to us. We just take it for granted, “That’s how they actually exist.” We never doubt it, never. Do you ever doubt that anything that you perceive is ever wrong? We say, “Oh, no! Well, okay, when I was smoking hash. When I was dropping whatever I dropped, then okay, that was a hallucination. But everything else? What I perceive around me is real.” Now the thing is, of course, if what we perceived around us were real, everybody should see things in exactly the same way, which is why we think other people are dumb. Because we perceive things in the right way and they don’t. So this is just talking even on a very gross level, isn’t it? “My opinions are right. People who don’t agree with me are wrong.” That’s just a very gross kind of believing in what we think.

This is a much more subtle one where the way things are appearing to us is as if they had their own essence; they existed under their own power. When we think of our self, “Well there’s a real person here, isn’t there?” Yes? When somebody says your name, “Yes, I’m here.” Especially if they say your name very softly so you can barely hear it. “Uh oh, they’re talking about me.” Then this feeling of me comes really big, doesn’t it? “Oh, they’re talking about me. They’re whispering.” We learned that when we were little, right? Whenever our parents whispered we knew. So there’s the sense of me that comes very strongly.

When we see other people, we look and there are real people there. Don’t you think everybody else is real? Real. Objective. That’s how people appear to us and we agree with that appearance. That is what things are empty of, is that kind of objective existence. So that’s what we’re talking about when we’re talking about emptiness.

It doesn’t mean things don’t exist at all. We’ll get into that part tomorrow. 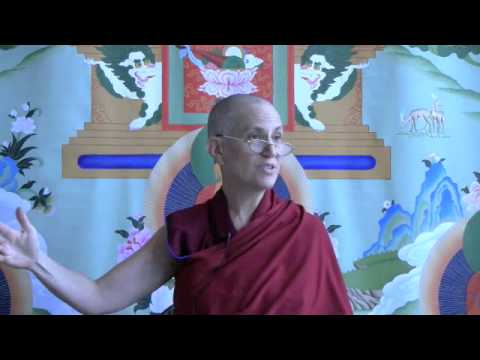 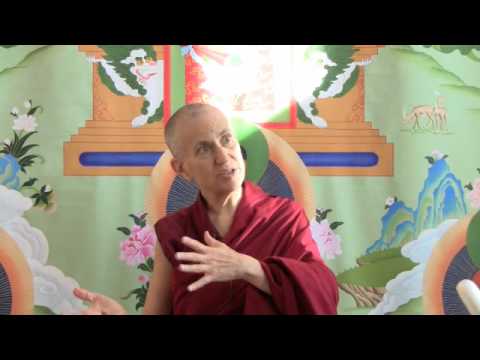