Stages of the Path 58: Purification and Buddha refuge (download)

We will continue on with our refuge visualization. Yesterday I talked about the visualization when you take refuge in the guru and what to imagine purifying, and the blessings and inspiration that you visualize coming when you have the golden light.

Another element in this is when you’re doing the purification, you can imagine all the negativities coming out of your lower orifices—it’s like dark, yucky stuff or pollution, or whatever is yucky to you and it comes out. These are all your negativities manifesting in that form, all the negative karma from beginningless time and especially the negative karma created in relationship with our spiritual mentors, and this comes out in that form.

Then you imagine, under the earth—kind of like in the Vajrasattva visualization—that the earth opened and there’s the Lord of Death, his mouth is open and all this negativity that’s coming out of you—old negative karma, habit patterns, emotional habit patterns that don’t serve you anymore—all this kind of stuff comes out as this very foul material. To the Lord of Death it’s like delicious ice cream. It falls into his mouth and he goes, “Mmmmm, yum, this is fantastic!” He eats it all up and when you’re done with the purification part of your visualization then you imagine that his mouth is sealed with a double dorje, I guess so he doesn’t burp [laughter] and he then disappears under the earth and the earth closes over him.

This is a very symbolic kind of visualization, imagining all of the negativities like this and the Lord of Death, and so on and so forth. Psychologically, using this kind of symbolism is very effective for our mind, especially when you feel kind of bad about something you’ve done. You have this visualization that you use like this and imagining it’s coming out and the Lord of Death has eaten it and he’s satisfied and he’s blissed out and he’s back under the earth and it’s all sealed up and taken care of. Then you can feel, “Oh, I’m very free of that right now.” Play with the visualization; it’s actually quite effective.

When we say Namo Buddhaya (I take refuge in the Buddha), we do a similar kind of visualization: first the white light coming and purifying, with the Lord of Death. And then the golden light coming and filling us with the faculties and the inspiration of the Buddha’s body, speech, and mind. Here, what we think when we’re doing the purifying part, we’re purifying all of our negative karma in general, but especially negative karma created in relationship to the Buddha. That would be things like criticizing the Buddha or criticizing the imagery. Like I said, you can comment on the artistry and so on, but saying the “Buddha is ugly” or buying and selling statues just to make a buck to make some money is creating bad karma.

All these kinds of negativities, maybe like having a low opinion of the Buddha or any kind of mental negativity or physical negativity that you’ve created in relationship to the Buddha, which could also involve stealing from the Buddha. If things have been offered on the altar, particularly to the Buddha—to a Buddha image—and we just take them for ourselves or we use them for a purpose other than what they were given by the donor to be used for. All those kinds of things we purify with the white light purifying. 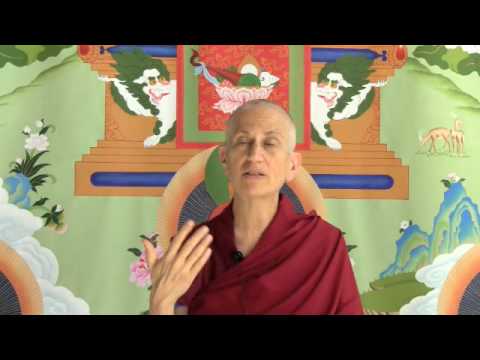 How to see the guru