Taking refuge in the guru

Stages of the Path 52: Refuge and guru refuge (download)

We finished refuge yesterday. I didn’t go into the description of the Buddha, Dharma, and Sangha in great depth because I thought that a lot of that contains the different lists of qualities and things like that—and I didn’t want to go through them. But it’s quite inspiring to study it. What I was thinking of doing is going into the ngöndro practice of refuge.

It’s quite a lovely practice. I can start talking tomorrow about the visualization that you do and also the way you use the visualization. You think of negativities created in reference to the guru, Buddha, Dharma, and Sangha, and purify those specifically. Then also their particular qualities—you imagine those qualities coming into you.

Some people have some questions about why the guru is considered when you’re doing the refuge ngöndro. “Everybody talks about the Three Jewels and here the Tibetan tradition has the guru, and what’s the story here?” When you’re talking about the guru as the refuge you’re not talking about the personality of your spiritual teacher. It’s really important to understand that the guru as an object of refuge is what is called the “ultimate guru,” which is basically the Buddha. It comes down to the omniscient mind of all of the Buddhas that manifest in all these different forms. That’s what is meant by the ultimate guru, and that is the guru that we take refuge in.

The downside is if we get very attached to the teacher as a personality and think that that person is our refuge. That person is impermanent and is one day going to leave this body. Then, if we’re very attached in that way, at that point it’s like our refuge is lost and we don’t know where to turn. That’s why it’s very important to see that the guru we’re taking this refuge in is nothing other than the embodiment of the Buddha, Dharma, and Sangha—which are not going to disappear when the physical body of our teacher is no longer here. I say this because I have seen many people, when their teacher dies, they’re going, “What do I do now?” Whereas, if you have really thought about this deeply, it’s not the teacher as the person, it’s the Dharma that you’ve learned, and it’s the teacher’s qualities that act as a model for what you want to become. When your teacher is not there physically, the Dharma that they taught you is certainly there. The Dharma in their minds is there for you to study and access and practice and realize in your own mind. That is the way that we’re taking refuge in the guru—that’s quite important. It’s not a fourth object of refuge. It’s seen as the embodiment of the Buddha, Dharma, and Sangha.

So if anybody has a picture—I’m trying to think of the refuge visualization—because the way it looks like is: there’s one large throne and then on it there are five smaller thrones. But when they depict it in a painting it looks kind of like the merit field, but also different because the central figure is Śākyamuni Buddha instead of Lama Tsongkhapa; and also because it’s one big throne with five thrones on it instead of a tree growing out of a milk ocean with this big lotus on top of it. 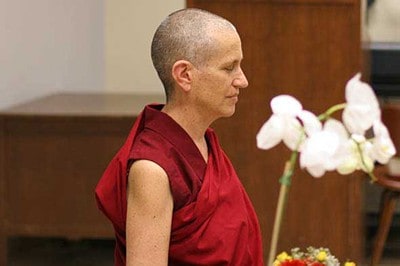