We’ve been talking about the refuge preliminary practice and we’ve talked about taking refuge in the Buddha, how to purify and then also to receive the inspiration. With the Dharma, we again do the two visualizations, one with white light purifying all of our negativities, especially negativities created in relationship to the Dharma. This could be things like mistreating Dharma texts, or putting other objects on top of them, or keeping them in a low, dirty place. It can also be things that are more serious such as making up your own teachings and saying that they’re the Buddha’s teachings. This can actually happen quite easily because if you misunderstand the Buddha’s teachings, then you interpret them your own way. It isn’t something the Buddha actually said, but you make it sound that way. That’s called “abandoning the Dharma.” It’s quite harmful for oneself and then especially if you talk that way to others it can be really, not so good, quite damaging.

Abandoning the Dharma, what I said before, making up some teaching that you pass off as the Buddha’s, but it isn’t; criticizing the Buddha’s teachings or criticizing other Buddhist traditions. This one is also really not good because all the traditions came from the Buddha. The Buddha taught in a variety of ways and sometimes said different things at different times to different people because they have different dispositions, different inclinations. If we understand that and we see the Buddha as a skillful teacher, then we don’t see these different teachings as contradictory. Otherwise, we might see them as contradictory and criticize other traditions and so on.

Now within this, we do have the tradition of debate and that’s always been very strong in the Buddhist tradition, is to debate. When you’re debating, you’re talking about ideas. Your purpose is to really increase your intelligence and your understanding. So debating the views is very different than criticizing the people who believe in them. It’s fine, and it’s encouraged by the Buddha and the masters, to debate the views. When we start to say, “Oh, somebody has a wrong view and they use this and their tradition blah, blah, blah…” that’s not good, but to say, “Well, this view doesn’t hold up to reasoning,” that’s perfectly okay.

You have to see the difference in your mind. I say this because there’s a big difference between debating to try and really understand and get at what the truth is versus putting down another tradition in an arrogance saying, “My tradition is better,” when maybe you don’t even understand your own tradition or the other tradition. Avoid doing that.

Buying and selling scriptures for business, disrespecting the texts, and as much as we hear this whole thing about not disrespecting the texts—you’d be amazed how many people go to turn pages wet their finger and they put their spit on the text. Or people put glasses, cups, their mala on top of the texts, these kinds of things. You hear it over and over again and you see people continually doing these kinds of things.

We want to purify all the hindrances that we may have created in relationship to the Dharma that would cause us not to meet the Dharma in future lives or to have wrong views in future lives. We have to purify those with the white light coming. Then with the golden light coming, thinking of all the Dharma’s qualities and how it leads to liberation and how it leads to enlightenment, how it leads even to peace amongst human beings in this world. With a great deal of faith and confidence in all the various different teachings and methods that the Buddha taught, we imagine those realizations coming into us as we imagine the golden light coming in to us and to all the sentient beings around us as we say “Namo Dharmaya,” or “I take refuge in the Dharma.”

Audience: I have heard in the past something about rebirth and how the Buddha taught it and how we need to recognize that. What is the importance of that, because we also know that the Buddha taught that phenomena inherently exist but that doesn’t mean that we hold it as, like, the highest, you know…?

Audience: Why is it always said?

VTC: Why is it always said? I think because when you have a view of multiple lives it gives you a much broader perspective on what suffering means. If we just talk of suffering, or dukkha, within one life, then it sounds like when you die it all ends. When you talk about it over many lifetimes, then it gives you a much deeper feeling of what being in saṃsāra means.

Similarly, when we think about the kindness of sentient beings, when we think about it over a period of many lifetimes, then we can see how everybody has been kind to us. But when we only think of one lifetime, then it’s possible we’ll leave some people out. We don’t know them or we have a different kind of relationship to them. Of course you can practice Buddhism without believing in rebirth. And you can benefit from the Buddha’s teachings without believing in rebirth. But to have a really deep understanding of what the Buddha is talking about, then this expansive view that goes beyond who I am right now in this body is very useful.

Then we talk about the two extremes. One of the extremes is nihilism and that is believing that there is an inherently existent self but that it ceases at the time of death. 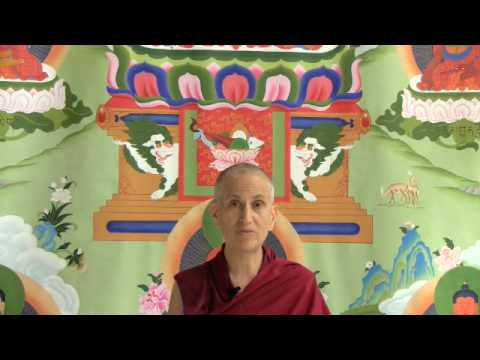