The last line I talked about, Lama Yeshe said,

Even if you are going to die tomorrow
at least for today keep yourself straight and clean clear
and be a happy human being.

Sounds like good advice. How do we be a happy human being? This is where Dharma practice comes in.

Then his next line was,

We have been asleep for countless lives.
Now it’s time to wake up.

The word that’s commonly translated as “enlightenment” actually translates as “awakening,” and the idea is that we are awakening from the sleep of ignorance. This is what Lama is advising us to do, saying that since beginingless time it’s as if we’ve been drugged and have been asleep by the ignorance that’s covered our mind, and now that we have a precious human life, it’s time to do what we can to abolish that ignorance and wake up to the reality in us and around us.

Doing this really entails seeing the disadvantages of ignorance. We talk a lot about “let’s attain awakening” and everything, and then one of our chief problems is, “Well, mañana.” Procrastination. Being busy with other things. Lounging around when we don’t physically need to be. Resting, but just like (mimics laying head down). This kind of laziness has been a big obstacle for us, and when I look kind of what lies behind this laziness, it’s the mind that thinks that samsara really isn’t so bad.

I mean, I’m really fortunate. I’m not born in Syria. I’m very fortunate, my body’s intact. It’s getting older, but so far so good. I’m quite fortunate, yes, that’s great, so there’s not this kind of vibrancy of…ignorance is a really big hindrance, and instead thinking that samsara’s kind of okay. At least, my samsara right now, and seeing that as kind of permanent, lasting, not remembering that I could die like that (snaps fingers), or that the whole situation I’m living in could change like that (snaps fingers). Just grasping at permanence, grasping at true existence, and not understanding the second and third kinds of dukkha very well. As long as I don’t have too much of the first kind of dukkha–the ouch one, the one that everybody including animals don’t like–as long as I don’t have too much of that, that’s okay.

Samsara is a pleasure grove. There are all these nice things to experience, and fun things to do, and places to go. You know that it’s good, so there’s not this awareness of even the second type of dukkha, that what we consider pleasure is actually a reduced level of pain. Instead we think, well, pleasure is pleasure, and when we have it we never think it’s going to end. It’s just going to continue. If we don’t realize that, then realizing the third kind of dukkha, what it means to be under the influence of afflictions and karma and not have any freedom, we don’t even look at that.

Do we wake up in the morning and say, “I’m under the influence of afflictions and karma”? No, we don’t think that when we wake up in the morning. “Oh, here I am. I’m an independent person. I can do what I want except when these other people get in my way, but I’m an independent person.” We don’t see the reality of our existence, and so we don’t see it as something that is troublesome to the extent that the third kind of dukkha. It’s as if we’re really walking on the edge of a cliff all the time, because with the smallest thing, then we’re over the cliff into the “ouch” kind of, the dukkha of pain, but we just don’t see it. So wake up. It sounds good. “Of course I want to become a buddha, but as Lama says, ‘slowly slowly,’ so I’m going to take my time and become a buddha. All these sentient beings that are suffering, there are just so many of them. What can I do anyways? So, if I just kind of take my time and enjoy samsara along the way, it’s okay. Anyway, I won’t get born in the lower realms, that’s for other people, not me.”

I think this is the kind of appearance that Lama was trying to pierce to get us to see the reality of our situation and take action while we can take action, because once we’re born in another rebirth, whether we’re able to take action or not, who knows? This doesn’t mean that we need to become panicky, and I just wasted five seconds and this is terrible, but let’s practice really being aware of our situation so that we can make our life meaningful and useful and, as he said, “We have been asleep for countless eons. Now is the time to wake up.” We have a precious human life. Let’s use it. 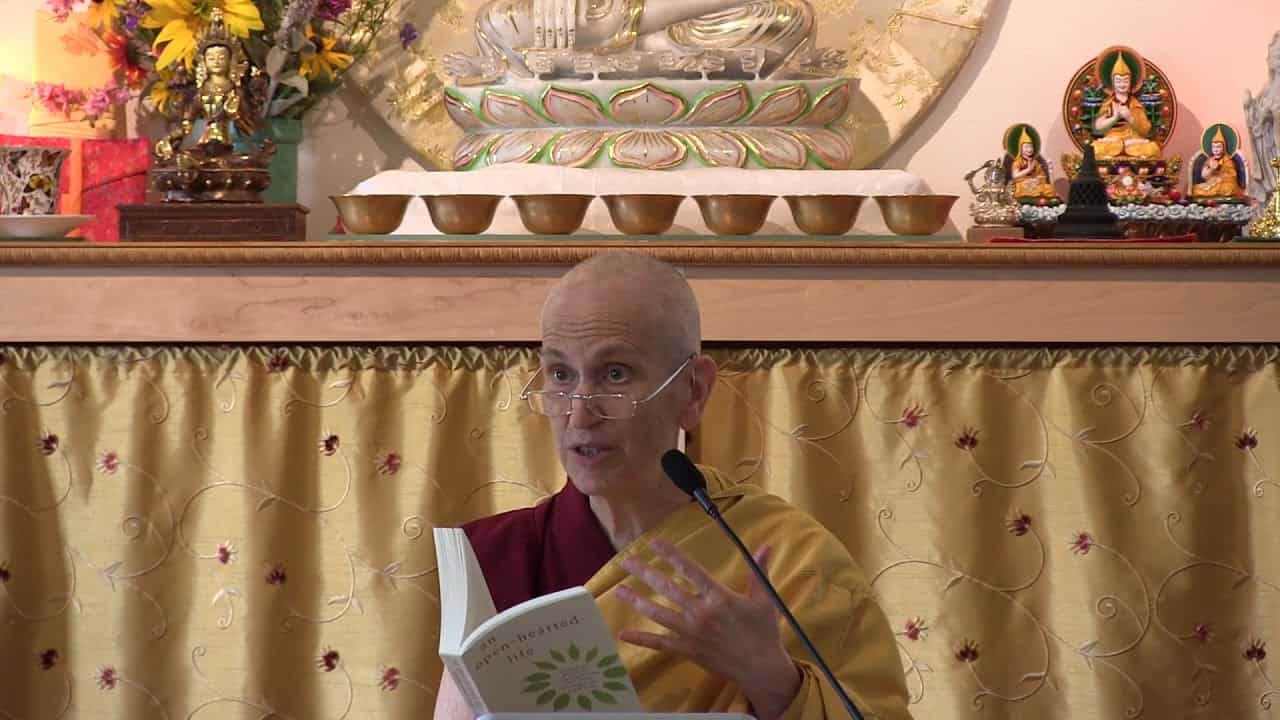