I’ve been speaking on just a few phrases that Lama Yeshe gave—pithy instructions at the end of his book, When the Chocolate Runs Out. I’ve done a few before and I’m on the next one.

The next one says,

Be reasonable in the way you grow
and don’t ever think that it’s too late.

Very good advice isn’t it? “Be reasonable in the way you grow.” We are often not very reasonable. We want to accomplish everything at once, attain everything at once, realize emptiness by… Well first we have to get renunciation, that’s by tomorrow. Bodhichitta the day after tomorrow, and emptiness the third day after that. Then by next Tuesday we should be buddhas. Because we come in and they say, “You can become a buddha in this very life.” That’s one of the first things we hear. They don’t tell us what we need to have done in thousands of previous lives. They just want to boost our enthusiasm in this life. “You can get awakened in this life.” So we all come in and we’re ready to do it.

I know when I went to India—I was among the first batch of people that went up the hill to Lama and Rinpoche—and we loved doing retreat. We all wanted to just stay our whole lives in retreat and become buddhas and none of us were going to come back to the west. The west was just corrupt, and India was next to the pure land. We just had to get a few clouds up above the sewers and the dirt in India and we’re nearly there and that was it.

We had two main models. One was the model—and this I think still counts now—one is the model of great scholars like Sakya Pandita, Lama Tsongkhapa. They’re also meditators, but they’re authors and they’re people who studied the classical treatises and wrote commentaries on them. They’re one model.

The other model is Milarepa. You just eat nettles and go to your cave. Don’t get stuck in it because the monsoon rains came. But you’re in Tibet, that’s not likely to happen And you just stay there in your cave eating your nettles, which of course taste like spaghetti, pizza, chocolate chip cookies. We don’t go the next step of what the nettles are actually going to be like eating them day to day. They kind of transform into food we like. But even then we are renounced. We are renounced. We have no attachment. We’ll eat nettles because we have so much bodhichitta and so much compassion and we can become buddhas in this life. So let’s go!

We sat down to meditate: “I’m going to get samadhi if it kills me.” And it almost did. We just sat there, pushing. You just push, you push yourself. So either, “I’m going master all the scriptures right away!” And then our old Western competition comes in: “I’ve got to be better than all the other Dharma students.” But actually we help each other because none of us could understand what the TIbetans were saying. The TIbetan translators were not very good in that day and age and we had to help each other to figure out what was going on. I mean it was really a scene.

I remember Geshe Jampa Gyatso trying to teach us Abidharma with all this technical vocabulary. The translator hadn’t even studied it, and we’re sitting there trying to get it.

Anyway we’re all young, we’re relatively healthy, and we’re going for it. You push and you push and you push, and that samadhi isn’t coming, and your memorization…. We don’t want to memorize, actually, so the great scholar job description is getting revised, because we’re beyond memorization. We know how to use libraries so we can look everything up.

We pushed, and then a lot of people got lung. Lung is this thing—there’s no exact (English) equivalent—but it’s an imbalance of the energy winds inside and it makes you tense, or stressed, or very emotional, or shut down, or something’s wrong. We got to get enlightened, and we got lung instead of enlightened.

Then we got to deal with the governments of Nepal and India who, “Sorry madame your visa is up. Sorry sir you have to leave the country.” Then people had to leave. They had to go to another country and then come back. But none of us had very much money.

We were riding these old buses together with the chickens and the sheep, and the roads weren’t very good so it’s like riding on our roads, bouncing up and down, for hour after hour. Especially if you’re in Nepal and the roads are twisting as you’re bouncing up and down. Then you get to India. In some places the roads are flat, but you’re going just as fast. Somehow the cows and chickens just move to the side about two inches before you get to them, because it looks like you’re going to just plow right into a cow. They’re standing up, they’re sitting down. Occasionally there’s an elephant you have to dodge. And the water buffalo. Then in recent years there’s the tractors piled high with hay that are driving on the Indian version of I-5 or I-90, and you’re zooming along. Of course, our taxi driver wanted to get to where we were going faster, so he drove in the lane going the opposite way because there wasn’t as much traffic. He was going on the highway the wrong way, going really fast, going past the tractors.

We’re all going to get to enlightenment really quickly. We weren’t very reasonable. What he says here. Lama, I don’t know how he really dealt with us, but there we were. He was saying, “Be reasonable.” And we were so enthused that we were actually very not so practical in many ways. But of course when you’re coming there and you have limited time because of the visa situation, and if you go back to your own country there’s no Dharma, there’s like zip, zero. So you had to take advantage of whatever you had. It was really quite a thing.

Maybe that’s why Lama is now saying, “Be reasonable in the way you grow.” He would often say to us “slowly, slowly dear.” But you get “slowly, slowly dear” together with “don’t waste one single millisecond because death is definite and the time of death is indefinite, and it could come like that,” because that cow may not move. And when you’re going through the parts [of the road] that are like (twists and turns) there’s no guard rails on the side of the highway.

Now things I think are maybe a little bit better. Now people really get to eat pizza. I don’t know that that always helps things, because I’ve really come to the conclusion that sometimes when you have to go through hardship you value what you have more. You don’t take it for granted. You appreciate it.

Why do we wash all the plastic bags in the kitchen? I’m sure some of you have been doing that. It stems from me living in India and you never threw a plastic bag out because they were like gold. Now you save them so you can recycle them. Back then, boy, tin cans, precious stuff.

When you go through difficulties you appreciate things, I mean just on the material level like that. But you also appreciate your teachers. Now there are so many books. So what do people do? They read books, they don’t come to the teachers. Your teacher teaches you something you may take notes, you put that away. But when study time comes you read a book. Or you go online. But somehow things that are online, or printed in books, are often regarded as more reliable than oral teachings, and I think that’s got thing completely upside down.

We really valued our teachers because—besides Lobsang Ranpa, and Alexandra David-Neel, and Lama Zopa and Lama Yeshe’s “Wish Fulfilling Golden Sun” with a huge chapter on the hell realms that you were dying to read—there wasn’t much in English to read. Really, hardly anything. Everything we got was from your teachers. It created a much different student-teacher relationship then. Everything was dependent on our teachers. I think I really appreciate that. I really appreciate that very much.

Be reasonable, but when you go through difficulties let the difficulties make you strong. Don’t go into victim mentality, and feeling sorry for yourself, or whatever. The difficulties have to make you strong so that you really want the Dharma. Because if you don’t really want the Dharma, and you don’t really feel in your heart like this is really important, because if I don’t have this my whole life is going to be a mess…. I mean, if those kind of ideas come while you’re going through the difficulties, then I think that’s very worthwhile, rather than just throwing up our hands and saying, “the pizza’s burnt. it’s just too difficult” and like that.

You don’t want to push and get lung, but you don’t want to be so lackadaisical because, “Well it’s always going to be here.” Because it’s not always going to be here, and it wasn’t always here. And in the case of the first generation, we had to really work very hard, People would come and they wanted to ordain, and Lama would send people back to their own country for a year to work to save the money to come back, because the Tibetans were a refugee community. Whatever donations they received were going for the Tibetans. There was no financial support for the West. So you had to go back to your own country, get a job, make it through that year, come back, and then you could take precepts, you could get ordained. You had to be willing to put up with something. It became something very precious for you.

“Be reasonable in the way you grow and don’t ever think that it’s too late.” We’ll talk about the second clause tomorrow.

[In response to audience] Joyous effort. That’s, I guess, what being reasonable is. Being reasonable doesn’t mean going along with what you feel like doing, what your ego feels like doing. That’s not being reasonable. But you also can’t clobber your ego over its head and say “Stop being so selfish. Get out there and rescue all sentient beings. Why are you sleeping more than four hours a night?” You don’t want to do that either. 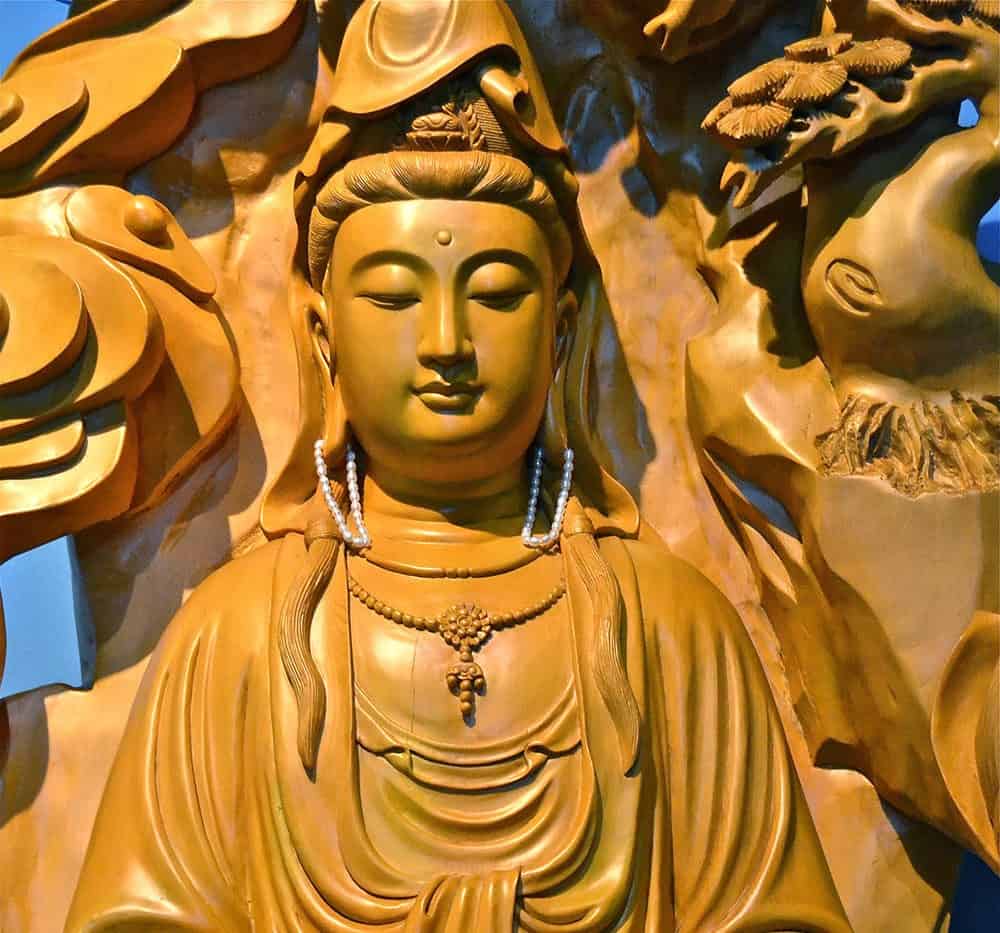 Getting rid of my buttons